Canadians have a small but efficient business network in Slovakia
SLOVAKIA is still quite an unknown and distant market for Canada. Most Canadians know little about Slovakia, apart from ice hockey. "They all know the hockey players. They all know the Šťastnýs. However, your country is becoming increasingly known and respected," says President of the Slovak Canadian Chamber of Commerce Daniel Torsher in an interview with The Slovak Spectator. He portrays Canada as a profoundly diverse society, which encourages people to live, according to their own cultural heritage. 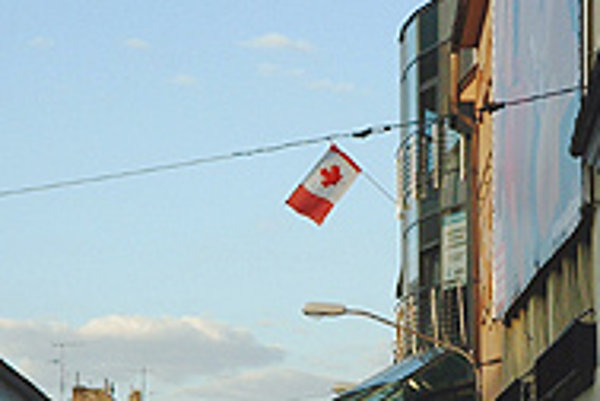 Font size:A-|A+
Canadians have a small but efficient business network in Slovakia

SLOVAKIA is still quite an unknown and distant market for Canada. Most Canadians know little about Slovakia, apart from ice hockey. "They all know the hockey players. They all know the Šťastnýs. However, your country is becoming increasingly known and respected," says President of the Slovak Canadian Chamber of Commerce Daniel Torsher in an interview with The Slovak Spectator. He portrays Canada as a profoundly diverse society, which encourages people to live, according to their own cultural heritage.

The Slovak Spectator (TSS): How would you characterise the community of Canadians living in Slovakia? Is the community concordant? Do people with some Slovak background and connection prevail?

Daniel Torsher (DT): Canadians living abroad do not seek each other out the way compatriots of some other countries do. They go about their own business and do not have a strong sense of needing to gravitate together. Maybe it has its roots in Canada being a very multicultural society, which favours multiculturalism and encourages everyone to live their own cultural heritage. Canadians tend to be outward-looking people, mobile, with an open attitude. They integrate quickly. They generally like travel and living abroad.

As for their ethnic background, the community is a mix. In our firm there are four Canadian lawyers in Bratislava. In the other international law firms present here, I can think of at least three other Canadian lawyers, two of whom are of Slovak background. The same is true of the big accounting firms here. Many in the business community have some Slovak connection through family or having previously lived in Canada and came back to run a business here.

TSS: Being the newly elected president of the Slovak Canadian Chamber of Commerce, could you characterise its main objectives? How does it differ from other chambers of commerce operating in Slovakia?

DT: The Canadian Chamber of Commerce is actually quite new. There was a group of Slovak businessmen who had various business connections with Canada and a number of years ago they founded the chamber. It was fairly low profile, not very active. About a year ago, a number of us, Canadians living here, thought it would be helpful to organise a small business network.

At that time we became aware of the existing chamber, approached it and we banded together. We are still in the initial developmental stage. The chamber is not very formalised and structured like the large chambers; it does not have an office or staff.

The Canadian-Slovak business network is relatively small and we do not think that there is a need to develop such a structure. But we want to make sure that there is some point of reference for people who have some interest in Slovakia. We can help them to make contacts and provide some references to become oriented.

TSS: What other services can the Chamber provide to Canadian or Slovak companies? What are the events that the Canadian business community supports?

DT: The chamber gives support to events happening with a Slovak/Canadian business angle, such as the Canadian Trade Delegation, coming in October. The Canadian Secretary of State for International Trade is coming to visit the country. The Canadian Ministry of Foreign Affairs will organise the trip while the chamber will give support and provide more visibility to the event. We will organize a business breakfast and meet the delegates, making sure they have a broad exposure to people on the ground here.

The Chamber also organises a few social events around Canadian holidays each year - Canadian Thanksgiving in October, and Canada Day on July 1st.

TSS: Does the chamber have the capacity to promote Canadian investors here in Slovakia?

DT: The chamber has not yet done promotion for Canadian firms and investments. We are still in a phase of getting off the ground and finding the right balance of activities, given our resources. Our objective is to provide a place where people can get information and can make and use contacts.

The chamber doesn't want to over-commit to creating an infrastructure that, given our size, we could not support. It shouldn't become over-ambitious and fail. The chamber has a broad appeal to Canadians here, or Slovaks with connections in Canada, to use it as a means of social contact.

TSS: Though having a large community of Slovak compatriots who maintain strong links with their ancestral homeland, Canada is not as visible in Slovakia as, for example, the United States. Why is that?

DT: This relative lack of visibility probably has several reasons. One is that the Canadian community is very small. It actually is very hard to gauge the size because there are lots of Slovaks who have lived in Canada and felt Canadian but when they come back here, they blend back in. Unless they identify themselves, we would never know who they are. The number of Canadians here who do not have a Slovak background is quite small. As for the business connection between Slovakia and Canada, there are a few examples that stand out, like for example the Polus City Center project or Insemas and Fend in the agricultural sector.

TSS: Is Canada more visible and less overshadowed by its neighbour in other countries? What are the main areas of interest of Canadian investors in Slovakia?

DT: My perception is that Canada keeps a low profile wherever it goes. It is a big country geographically but in terms of population and economy it is considerably smaller than the United States. It is less obvious for Canadian companies to think about Slovakia as such an investment site as they have got very specific interests. They might think about Slovakia as a destination if there is a particular business or resource that they want to acquire and develop. In areas like forestry, the pulp and paper industry or the energy sector, all major industries in Canada, one might think that there must be some natural synergy between Canada and Slovakia. However, the distance and the relatively small scale of Slovak Canadian investment exchange have so far kept these investments to a modest level. The last time a Canadian energy company took a serious interest in Slovakia was a number of years ago, but finally the deal did not happen. However, there are several high-tech companies in Canada with activities here. For example, Nortel has been present in Slovakia for quite a number of years. Other have been serving as suppliers and developmers in the spheres of software development and other high tech applications.

DT: Canadian investors will have a different position from European investors after Slovakia's accession to the EU. I do not think that the membership will make it more difficult for Canadian companies to invest here. On the contrary, conditions will improve and Slovakia's position within the EU will make it a more attractive investment destination. However, EU membership will create certain advantages for European investors.

A German investor will probably find it easier to enter the market than a Canadian one. Canadian business here often rises upon a particular opportunity whereas in countries like Italy, Germany, or Austria, Slovakia is seen more as a natural extension of their own markets.

For Canadian companies it is quite a different set of dynamics to develop a business in Slovakia. They do not approach Slovakia like an OMV or a MOL, or like major players in the European banking sector which have seen investment here as an incremental process of expanding their own business borders to include the Slovak market.

TSS: What are the main barriers to tightening Slovak-Canadian business links. How do you evaluate steps that the Slovak government has taken to improve Slovakia as an investment target?

DT: Of the countries in this region, Slovakia has made the most progress in raising its profile. It is becoming known and increasingly respected. I would list the liberalisation of the market along with the proposed tax reform, which investors are very interested in. Certainly, investors are less likely to be directly concerned about the local issues that the reform raises in terms of making sure that the social impact is properly balanced.

Often investors simply come to a region with a project in mind but still unsure of exactly where they are going to start it. It could be Poland, Hungary, Slovakia, sometimes Romania, etc. - they look at many factors.

The tax reform would be one more factor to set Slovakia apart. Corporate tax rates, which will be even lower, together with a simplified tax code will make this an attractive place to do business. The flat income tax rate is quite unique for North Americans - it has often been talked about but rarely implemented there. It could be quite an incentive to come here. In terms of infrastructure and resources available here, people who come here are favourably impressed with labour skills and education. Generally, the cost of doing business is lower here than in Canada, which makes Slovakia quite an attractive place to invest.