Slovakia by foot and pedal: A tough old bones of a country

Last week, Tom Nicholson recounted the first part of his trip across Slovakia. The Nicholsons took a single bike between them, with one riding and the other running alongside.
(continued from last week)
Day 5: Ružomberok
to Podbiel (47km)

A long hill out of Ružomberok over the pass at Valaská Dubová, where the Slovak folk hero Janošík was allegedly caught. Our first glimpse of Orava, a broken, rugged landscape blanketed by lush pastures and crops. 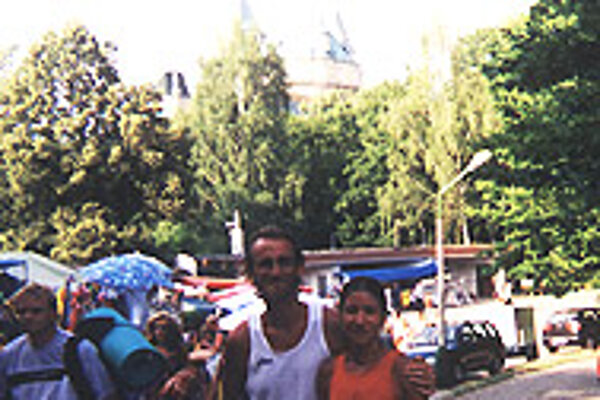 Last week, Tom Nicholson recounted the first part of his trip across Slovakia. The Nicholsons took a single bike between them, with one riding and the other running alongside.

A long hill out of Ružomberok over the pass at Valaská Dubová, where the Slovak folk hero Janošík was allegedly caught. Our first glimpse of Orava, a broken, rugged landscape blanketed by lush pastures and crops. The highway through industrial and ugly Dolný Kubín suddenly narrows, and we battle a torrent of trucks for a piece of the road.

At Oravský Podzámok the highway divides, taking the trucks north and leaving us to enjoy Orava Castle, an imposing 13th century fortress on the former Hungary-Poland trade route. Our path takes us along Orava River, past the log houses typical of the region, and perhaps the ugliest church in Slovakia, at Sedliacka Dubova, a bungalow crouching under a rusting iron tower.

Podbiel, however, is beautiful - a living museum of folk architecture where tourism has protected the village from the poverty that afflicts this region.

A steep climb (what else) takes us through Zuberec and its preserved wooden houses, over the Kvačianska pass and into the Liptov region. All day we're running in the shadow of the West Tatras and Rohače, and the air smells of spruce and wet rock.

After a stop to change over at Kvačianska, I almost hit Lucia with the bike; she has stopped suddenly in my path, her body contorted in fear. It's a dog - a tiny, hairy morsel of a dog, maybe 15 years old and with three teeth in its mouth. She gives it a wide berth, shuddering. The dog is clearly flattered by this show of respect, and limps forward in delight to bark at us.

The day we have both been looking forward to, a major climb into the High Tatras, on a road that wends around Mt. Kriváň and then falls away from Štrbské Pleso to the backwater village of Štrba, which lies off the main Mikuláš-Poprad highway. We eat and sleep at the splendid Hotel Sipox, the only accommodation in town, which is part of jailed businessman Jozef Majský's chain of interests. In the evening we walk up the town to a rise in the land and watch night fall over the Tatras. The beauty and proximity of the mountains leaves an imprint on everything in Štrba, even the pace of life. Everyone is on mountain time.

Out of the mountains, and into east Slovakia. Kežmarok, castled and churched and beautifully preserved, is also home to a major Roma community. Tumbledown houses and unpaved passages, inhabited mainly by half-naked children. For the next week of our trip, the Roma are to be a shadowy presence, one glimpsed on the outskirts of mainstream life, one seen but poorly understood.

The east also makes its presence known in Kežmarok through the service industry. Hotel Štart, hidden up a hill with no signs at the bottom, is dark when we arrive, and the reception clerk is smoking with the bartender in the empty restaurant. No, we cannot have a room, as only the manager can rent them out, and he will not be back until evening.

Finally, we strike Hotel Klub in the centre of town, pricey at 1,240 Sk ($35), but comfortable and clean. Breakfast is all-you-can-eat, with free coffee refills. The receptionist smirks as she hears our complaints about the other accommodation in town.

Into the Levočské Vrchy, a range of hills which look exotic on the map but are actually rather stifling and unimpressive. They set the tone for the day - Spišské Podhradie, the settlement that sprawls under Spiš Castle, appears bitterly poor and run-down, for all that it embraces a major tourist destination. Levoča, for all its Catholic history and storied beauty, is short of public phones, bank machines, decent restaurants and cheap hotels.

The first place we go to offers expensive but miniscule pizzas, and what it calls "mixed drinks", such as cola with orange pop, or cola with mineral water. We eventually eat at the Slovenka restaurant, which serves the worst fried cheese I have ever eaten, and a plate of spaghetti literally swimming in oil and decorated with a squib of ketchup.

On the way back to the campground we're staying at north of the city, we take a short cut and get lost, eventually finding ourselves high above Levoča at Marianský Kostol, from which the Pope celebrated mass on his last visit to Slovakia in 1995. From this eyrie, we watch the evening settle over Levoča's roofs and disappointments.

We now leave the known world for the Spiš region, which is about as rural as Slovakia gets. First through the regional capital Spišská Nová Ves, a pretty town overshadowed by its highway, then up a steep road into the Havranie Vrchy. Nálepkovo, a mining/farming town of 2,700, lies on the Hnilec River. We stay at the sports stadium for Sk100 (€2.38) each, the only accommodation in town.

The complex is run by Jozef Kráľ, the King of Nálepkovo, who is missing several teeth and a few fingers on one hand, but is bursting to please. Lucia's mother has apparently called him to make sure he takes care of us, and he seems somewhat in awe of her. He fetches fresh towels from home, orders fresh rolls for our breakfast, and makes a gift of a litre of fruit juice he digs out of his office.

From mayor Dušan Daniel, who is friends with the King, we learn that Nálepkovo has over 50% unemployment, and a Roma population of 1,000. As we walk around town, the Roma are the only ones to call out greetings to us. A truck arrives in the evening to buy baskets of blueberries and raspberries the Roma have picked in the surrounding forests, and is swarmed by vendors. Some of the Roma we meet look absolutely wild, almost feral, with untamed hair, ragged clothes, and smelling of bush and smoke.

Breakfast arrives, and the King has ordered for us: four white rolls, and what looks like a kilogram each of butter, cheese and cheese spread, with a pitcher of warm milk to wash it down. It's amazing how widely one person's idea of breakfast can differ from another's. As if we belonged to different species.

We strap the King's juice and a half-empty bottle of slivovica to the bike pack, unwilling either to drink or discard them. Through that endless sultry day, bumping through villages that haven't changed for decades, the juice and the booze broil in the sun.

Still in rural Slovakia, but the fields are getting bigger and the farms more prosperous, the combine replacing the scythe and farm equipment more numerous on the roads than cars.

After several days in the wilderness, Prešov is an assault on the senses, especially with the sense of order that rules the Old Town district - buses and traffic to one side, with a vast promenade reserved for outdoor cafes and strollers.

The beginning of Slovakia's wooden church district, with our path taking us past an old Gothic church in Osikov and a Gothic chateau in Hertník. We haven't seen any other tourists since leaving Prešov. We stay at the Semafor Penzion in Bardejov, and Lucia expresses amazement to the owner that so much has been renovated in the city since 1989. Nonsense, is the answer, why does everyone pick on the communists?

We take a small detour near the Polish border through the village of Becherov. There are only seven cars in Becherov, among several hundred houses, and we pass an old woman pulling a rickety cart piled high with cut grass. The strap goes around her shoulders, and she strains forward like a beast of burden. Never mind the Roma, just getting east Slovakia into the 21st century is going to take some doing.

In Svidník, an unattractive communist relic, we eat the best meal of the trip, a massive pizza in a nightclub restaurant under the derelict former Hotel Dukla.

It's Saturday again, the last day of the trip, and we wake up determined to gain Medzilaborce by noon and buy a gift for our son. We're on the road by eight, passing wooden churches with barely a glance, ignoring the Valley of Death and the tanks that have been preserved from a major World War II battle, but as we regain the main road to Medzilaborce, a road sign announces the city is 10 kilometres further than we expected. It's a real psychological blow, not least because we had both begun to ease up with the end in sight.

Then follows a heartbreaking hill up through Malá Poľana, the woods strange and forbidding, the gradient remorseless. At the top, when it is clear we won't make it in time, Lucia stops to curse. I've never actually seen someone do this before, stand and yell at their surroundings. Well said, honey. We roll in to Medzilaborce 20 minutes after noon, and everything is shut tight, nothing is stirring, not even the dust. Lucia cries her frustration at not making it. Or maybe it's her relief at having made it.

We sit without talking at the railway station until the train pulls in. I finish the bottle of slivovica, then wish I hadn't.

My diary shows 690km run, 300 of it by Lucia, but little else about the travel itself. Then, as now, most of what we have seen defies description, perhaps because it's been so intimate. How seldom you experience a country from the road, except by car. How important weather becomes when you are out in it. How intensely you experience every contour of the land when you have to run around it or over it. How emotional is every arduous journey, and how attached you become to the land you pass through.