BRATISLAVA is scheduled to return to medieval times on September 6. In the first of what may be a recurring event, the Bratislava Old Town city council will host a festival re-enacting the coronation ceremonies once held in what is now the Slovak capital.
The event is to take place on the 440th anniversary of the coronation that marked the beginning of Bratislava's 250-year stint as the coronation capital for the Habsburg Empire. 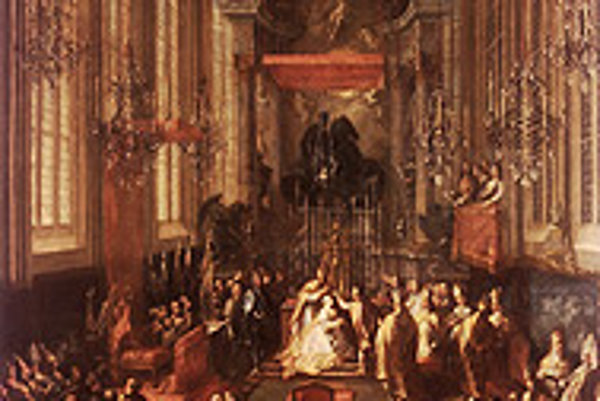 Font size:A-|A+
BRATISLAVA is scheduled to return to medieval times on September 6. In the first of what may be a recurring event, the Bratislava Old Town city council will host a festival re-enacting the coronation ceremonies once held in what is now the Slovak capital.

The event is to take place on the 440th anniversary of the coronation that marked the beginning of Bratislava's 250-year stint as the coronation capital for the Habsburg Empire.

The city council sees the festival as an opportunity to commemorate Bratislava's history, attract tourists to the city, and to help provide a popular context for Slovakia's accession to the European Union by writing it into a longer history of Slovakia's integration with other European countries.

More than 100 actors in historical costume will perform and "will create the atmosphere of olden times", the council's representatives state. "It should make the citizens of and visitors to Bratislava feel [what the city was] like 440 years ago."

The procession will lead through the Old Town from St. Martin's Cathedral down Kapitulská and Prepoštská to Michalská Street. From there, it will move to the Franciscan Church where there will be a tournament and an accolade of knights.

The parade then moves to Hlavné námestie square, where there will be a coronation mound, traditionally made of earth brought by royal guests from all parts of the kingdom. The monarch would charge up this mound and point his or her sword to the four directions, swearing to defend the integrity of the empire.

The traditional path of the coronation parade can be seen, marked on the cobbled streets of the Old Town by a trail of crown medallions.

The procession will culminate at Hviezdoslavovo námestie square with a feast opened by the European Union ambassador to Slovakia, Eric van der Linden, and the Mayor of the Bratislava Old Town, Peter Čiernik, with the ceremonial firing of a cannon.

The ensuing festivities will include a medieval dance performance by the Saltarelo dance troupe and a strudel competition judged by the public. Ten crafts booths will present traditional crafts where visitors can watch or try their hand at pottery, weaving, or glass-blowing. There will also be a master beekeeper and booths with different kinds of wine, which, in addition, will flow from one of the square's fountains.

Bratislava, known as Pressburg in German and Pozsony in Hungarian, served as the capital of the Habsburg Empire after the Hungarian plain and parts of what is now southern Slovakia were conquered by the Ottomans. Maximilian II was the first king to be to be crowned in Bratislava, in 1563. From then until 1830, the city hosted 19 royal coronations - 11 kings and 8 queens. When the Turks were finally pushed out of Hungary in 1786, Budapest regained its position as the empire's capital.

On the north wall of St. Martin's Cathedral is a list of the names of those crowned and the dates of their coronations. Notable among them is Queen Maria Theresa who took the throne at 24 years old and ruled for 40 years, from 1740 to 1780.

Maximilian II's coronation signalled the consolidation of a vast area, consisting of The Holy Roman Empire, Bohemia, and Hungary, under one ruler. The festival organizers see a similarity between this unification of empires and the formation of the European Union.

"The area that [Maximilian II] represented and the nations joined together in this area remind us in a certain way of the situation we are facing today... we want to show that integration is not something new and it is just the form that changes," says Lucia Pašková, a member of staff from the department of investment activities and projects at Bratislava's Old Town district. The festival is co-financed by the European Union through the Phare project fund.

According to the Old Town City Council, "in the future it will be necessary to look for the things that connect us now and that connected us then. One of these common points of intersection is the common history of the nations of central Europe."

The council would like to lay the foundation for coronation re-enactments in other parts of Europe. To this end, Čiernik is holding a European Cultural Cooperation conference on September 5, the day before the event, to which the mayors of central European coronation cities are invited. According to Pašková, he hopes that this project will "grow and spread, so that in the end, all the royal cities of Europe will be included."

The Old Town District government hopes to make this a recurring event. "We would like to start a tradition of the coronation ceremonies in Bratislava... the event should be a tourist attraction and should bring more and more visitors to Bratislava every year," says Pašková.

"The event," states the Old Town City Council, "will begin to write a new history."