PAVOL Rusko, the parliament's deputy speaker and head of the ruling coalition's New Citizen's Alliance (ANO), has been nominated to replace departing Economy Minister Robert Nemcsics.
On September 3, ANO's board of chairmen voted for Rusko as the party's new candidate for the economy ministerial post, a week after Nemcsics, as well as Deputy Transport Minister Branislav Opaterný, were told they no longer had their party's confidence. 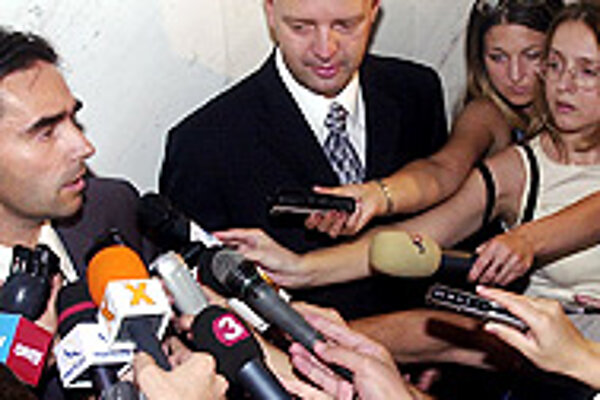 On September 3, ANO's board of chairmen voted for Rusko as the party's new candidate for the economy ministerial post, a week after Nemcsics, as well as Deputy Transport Minister Branislav Opaterný, were told they no longer had their party's confidence.

While Opaterný's replacement has yet to be agreed on by ANO, many have been surprised by the nomination of Rusko, former private businessman and media mogul, who built and ran the country's most popular private TV station Markíza.

At a press conference following the party meeting, Rusko said that he had briefly discussed the nomination with Prime Minister Mikuláš Dzurinda, who officially names the members of the cabinet. Rusko suggested that the PM "did not say he disagreed with the choice".

"I had the feeling that he took note of it, and that he did not find it unacceptable," Rusko said.

Private news channel TA3, meanwhile, reported that Dzurinda wanted to consult with the remaining three ruling parties about the nomination. Rusko, in the meantime, pledged that he is ready to face the new challenge.

"I know that being an economy minister is hard work from dusk till dawn and I realise what risks I am getting myself into," Rusko said.

He added that he feels confident about his managerial skills to run the sector "with the help of a good team of experts".

Outlining his first ideas for the post, he said the minister's goal must be "the creation of good conditions for the private sector, so that funds are made available", consequently boosting the country's economy.

Michal Vašečka, analyst for the Institute for Public Affairs think tank, confirmed that Rusko's nomination was "unexpected" and added that it was down to ANO's ruling partners and, ultimately, the PM to either respect or reject the nomination.

"The nomination of the party leader to this post confirms that there has been a lack of trust inside the party in general, which has now resulted in the nomination of its own chairman. It also proves that the position is very important for ANO," Vašečka said to The Slovak Spectator on September 3.

Vašečka also said that possible problems could arise if the ruling Christian Democrats (KDH), who historically have a strained relationship with ANO, and specifically with Rusko, would oppose the nomination.

But Pavol Hrušovský, head of KDH and the speaker of parliament, said at a press conference that his party respected ANO's right to the post.

In a so-called coalition agreement completed after the September 2002 national elections, cabinet parties have distributed state posts among each other on the basis of the election results. ANO is entitled to hold the economy minister and deputy transport minister posts, among others.

Hrušovský, who said that it is within the authority of the ruling coalition to decide about Rusko's nomination to the post, has already discussed the ANO proposal with Dzurinda. He was unable to tell whether the KDH would grant its confidence to Rusko as economy minister; however, if he were to become a cabinet member, the Christian-Democrats would respect the move.

Rusko's nomination came one week after Nemcsics agreed to voluntarily resign from his post, stating that he understood continuing his job would be difficult without the support of his own party.

But deputy transport minister Opaterný has refused to leave voluntarily.

According to the existing rules, individual ministers are entitled to fire their sector's officials, and thus Opaterný said he would only leave if Transport Minister Pavol Prokopovič were to recall him.

Although Prokopovič insisted that he had no professional objections to Opaterný's performance as deputy transport minister, he agreed, following a September 2 meeting with Rusko, to fire Opaterný.

"I respect political customs, as well as the commitments resulting from the coalition agreement," Prokopovič said.

Both Opaterný and Nemcsics are expected to leave their posts by the end of September and will then return to the parliament to serve the rest of the four-year election term as MPs.

Both politicians said that as MPs, they would back the cabinet's program.

If Rusko's nomination were to be confirmed and approved by the PM and later formally accepted by President Rudolf Schuster, ANO's deputy chairman Ľubomír Lintner would replace Rusko in his current post as deputy speaker of parliament.