TRANSPARENCY watchdog organisations have warned of the danger in the planned elimination of a Sk12 million (€290,000) spending limit on parties' election campaigns. They argue that doing so before new rules of control are put in place would create a vacuum.
The cabinet agreed to abolish the law at its meeting on August 27, dubbing the existing legislation ineffective due to the virtually non-existent control mechanisms. 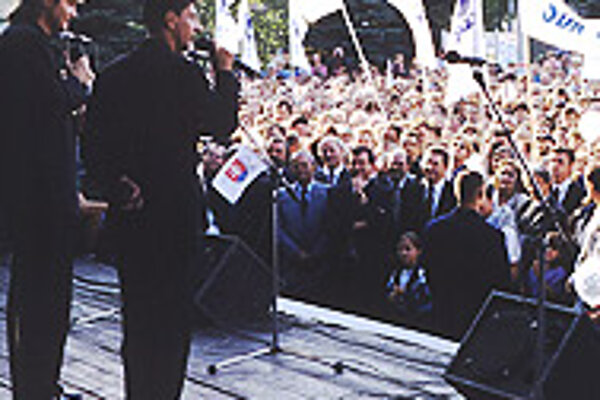 Font size:A-|A+  Comments disabled
TRANSPARENCY watchdog organisations have warned of the danger in the planned elimination of a Sk12 million (€290,000) spending limit on parties' election campaigns. They argue that doing so before new rules of control are put in place would create a vacuum.

The cabinet agreed to abolish the law at its meeting on August 27, dubbing the existing legislation ineffective due to the virtually non-existent control mechanisms.

The law, originally approved in 1994, was intended to create equal campaign conditions for all political parties, regardless of their size, and to ensure that wealthy parties do not enjoy a major advantage in election races.

"Practical life has shown that the control of the promotional pre-election spending of political movements and parties has been minimally effective," the Finance Ministry stated in its explanation for why the limit is unnecessary.

Even some opposition MPs have agreed with the elimination of the limit.

Ján Kovarčík, deputy chairman of the Movement for a Democratic Slovakia (HZDS), said to The Slovak Spectator that "except for HZDS and some smaller parliamentary parties, I think that all the others transgressed the limit during the last elections. Thus it would be reasonable to cancel the limit because it has hardly ever been respected anyway."

The law has indeed proven ineffective: for nearly ten years now, as three parliamentary elections have passed, only one party has officially gone beyond the legal limit. The ruling coalition party, the New Citizen's Alliance (ANO), admitted in a regular report to the Finance Ministry that its 2002 election campaign cost Sk12.9 million (€310,000).

But thousands of mega-billboards, plastered around Slovakia before the elections, promoted parties such as the ruling Slovak Democratic and Christian Union (SDKU), or the opposition Smer party. This led many observers to suspect that it was not just ANO that had transgressed the legal spending limit.

Slovakia has been no stranger to lavish election campaigns: as part of HZDS' 1998 campaign, supermodel Claudia Schiffer, side by side with the party's boss, Vladimír Mečiar, opened a highway section.

Local NGOs caution that a major hole in the legislation would result from lifting this campaign-spending limit without any plan for controlling political party financing.

The head of the cabinet's anti-corruption unit, Ján Hrubala, for example, said that the elimination of the limit was "premature", while the Fair Play Alliance (APFP) NGO recommended that MPs reject the cabinet's proposal.

In a statement sent to The Slovak Spectator on August 27, the APFP said that "because the cabinet has not talked about the details of the [future] control of political parties, it has caused suspicion that it does not have any concrete plan [for controlling campaign spending and parties' financing] prepared yet."

But according to Finance Minister Ivan Mikloš, who proposed the elimination of the limit, the move was not premature and, furthermore, is in line with the cabinet's legislative plan.

He also said that the Interior Ministry was working on a new law concerning political parties that would set out a detailed list of control mechanisms to make sure parties are not supported by illegal money sources. That law should be prepared by November this year.

It is expected to expand the parties' obligatory financial reports from the present requirement of claiming spending in national election campaigns to also include spending during campaigns for municipal positions. In addition, it will likely introduce a maximum membership fee for individuals entering political parties and install a system for monitoring gifts and other contributions to political parties, via a special registry, which would include the value of and identify the donors of the gifts.

Kovarčík of HZDS agreed that the new law must make sure that "every crown spent by political parties is transparent and properly documented".