HEARING sophisticated Slovak speech filtering out from an office in the very heart of Budapest would surprise any visitor to the Hungarian capital. Yet, one should not be taken aback by this: for over 20 years, the former National Minorities' House in downtown Budapest has been serving as the editorial office of the only major Slovak-language weekly in Hungary, the Ľudové noviny. 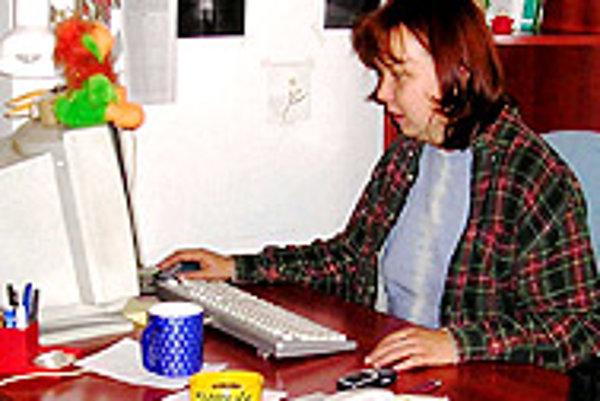 HEARING sophisticated Slovak speech filtering out from an office in the very heart of Budapest would surprise any visitor to the Hungarian capital. Yet, one should not be taken aback by this: for over 20 years, the former National Minorities' House in downtown Budapest has been serving as the editorial office of the only major Slovak-language weekly in Hungary, the Ľudové noviny.

The building is situated right in the middle of Nagymező utca, a busy street often referred to as the Hungarian Broadway, since many of the famous Budapest theatres are nestled in its centuries-old buildings.

"Before the establishment of a self-government system for the minorities in 1995, cultural heritage organisations of Slovaks, Croatians, Germans and other ethnic minorities resided here," says our designated guide, Eva Fábiánová, pointing her finger to the upper levels of the building.

The young journalist has been a staff writer with the Ľudové noviny for a year and a half. As we sit down in one of the six rooms that comprise the editorial office of the weekly, Fábiánová explains how she ended up writing for Slovaks living in Hungary.

"We are a small community so it was easy for them to find me," she says with a grin. Brought up in Pilisszántó (or Santov in Slovak), one of the approximately 110 municipalities with ethnic Slovak inhabitants, Fábiánová had always wanted to continue her studies at a Slovak university.

"At eighteen, facing the question of what to do next, I approached Imrich Fuhl, not anticipating that he would later become my boss as editor in chief at Ľudové noviny. He told me that ethnic Slovaks [in Hungary] were in urgent need of sociologists and journalists. Sociology had never been my cup of tea, so I decided to study journalism in Bratislava," Fábiánová says, recalling her beginnings as a journalist.

As for the initial stages of the Ľudové noviny, the paper was published for the first time in 1957; its predecessor, Naša sloboda appeared for the last time in October 1956. For 46 years, the paper has continuously operated under the name Ľudové noviny. Now, five staff writers and four freelancers are writing and editing the twelve-page weekly.

"Apart from our devoted freelancers, we have an editor in chief, his deputy, a proof-reader, and us, the two staff writers," Fábiánová says, counting the few personnel on her fingers.

"In fact, each of us is a reporter, a photographer, a writer, and an editor at the same time. We are all-in-one journalists," she adds.

We walk around the premises, peeking into some of the offices. It is Friday, meaning there is almost nothing to do at the weekly. No deadline, no hurry. So we have time to talk and enjoy some coffee.

The 100,000-strong Slovak minority in Hungary, unlike its Hungarian counterpart living in Slovakia, does not consist of a homogeneous community or uniform language area. Rather, Hungary's ethnic Slovaks live in isolated communities and in relatively small units that speak the language, which, in most cases, reduces the chance of survival.

The minority-language media is instrumental in helping the culture of ethnic Slovaks survive. Public radio and television offer broadcasts in each of the country's minority languages. The Slovak minority gets a daily thirty-minute radio programme, and public service television devotes 25 minutes of its airtime to a Slovak-language broadcast.

"There are only a few journalists in our community; this is why two of my colleagues have also been working for the television and radio programmes," Fábiánová explains.

In Hungary the state subsidizes newspaper and book publishing in the Slovak language. Running no ads or other commercial products, the Ľudové noviny is fully subsidized by the Public Foundation for National and Ethnic Minorities in Hungary.

Since the autumn of 1996, it has been the weekly magazine of the National Slovak Self-government. Other towns run different weekly magazines, and several local papers publish supplements in Slovak. The Ľudové noviny, however, is the only Slovak-language weekly circulated and read nationwide. It also has its own internet domain - at http://www.comp-press.hu/ludove2000. The Ľudové noviny tends to reach more readers via the internet than by the sale of hard copies at newspaper stands.

"Apart from Slovakia, we have many readers in the Czech Republic, Canada, the former Yugoslavia, and Romania," Fábiánová says.

"The relatively small number of our subscribers, approximately one thousand, does not reflect the work of our journalists, but rather, the minority policies of the past. As for active mother-tongue usage, ethnic Slovaks have reached a critical phase," Editor in Chief Imrich Fuhl points out.

Only a relatively small number of the Slovak minority uses Slovak in everyday communication. It is mainly those of the older generation that still have the ingrained need to use their mother tongue, and they mostly speak Slovak when communicating with each other.

A recent Hungarian governmental report indicates that in most of the minority families, the process of passing on the mother tongue has broken, with the Hungarian language becoming dominant. The various dialects spoken by the minorities are incapable of continuous renewal, and therefore have a decreasing role in social communication.

"The 1993 Act on the Rights of National and Ethnic Minorities guarantees all the minority rights you can think of, but officials have so far failed to coordinate their efforts to implement them. So we can have schools, magazines and cultural autonomy, but there is no directly accessible money allocated from the state budget for these purposes. We have to apply for grants constantly in order to stay alive," says Fábiánová. This, according to her, also contributes to the poor mother-tongue usage among ethnic Slovaks.

"To be honest, our weekly itself had not been trying hard enough to revert this phenomenon; during the previous decades, it failed to meet the real needs of its readership," Fuhl admits. Therefore, he says, more feedback was needed from readers.

But what is it that they now can find in the magazine? Fuhl begins turning the pages of the most recent issue of the Ľudové noviny.

"We deal with politics, the functioning of self-governments and civic organisations. Given that the greater part of our community's activity is of a cultural nature, we tend to concentrate on various cultural events of Slovaks in Hungary. We also cover Slovak-related happenings worldwide, but especially those taking place in Slovakia," Fuhl explains.

The magazine has a special two-page section for school kids, one page allocated for even younger children, and articles of special interest to women. Literature is also present in the weekly, as poems and short stories get published, written by authors "from all over the Slovak world", as Fuhl puts it. Like in many weekly magazines, readers of the Ľudové noviny can amuse themselves with a crossword puzzle and by reading jokes.

"There is a room I haven't shown you yet," Fábiánová suddenly remembers. "This is our archive." She opens up a murky room that houses dozens of bound volumes of Ľudové noviny. I can't help grabbing one, dated 1976, dusting it off, dipping into the worn-out volume, and sniffing the yellowish pages. "It is a sensation precious for any journalist, I guess. For me, it is our history," she smiles.