Home of Jewish past nearly sacrificed for future

A FUNCTIONING Orthodox synagogue in the eastern Slovak town of Prešov today houses the oldest Jewish museum in Slovakia that records the history of the community in the region. Roughly a decade ago, however, the decision over the synagogue's future caused a controversial debate within Prešov's Jewish community.
"In the late 1980s and early 1990s, American Jews wanted to buy the synagogue and move it to Los Angeles. 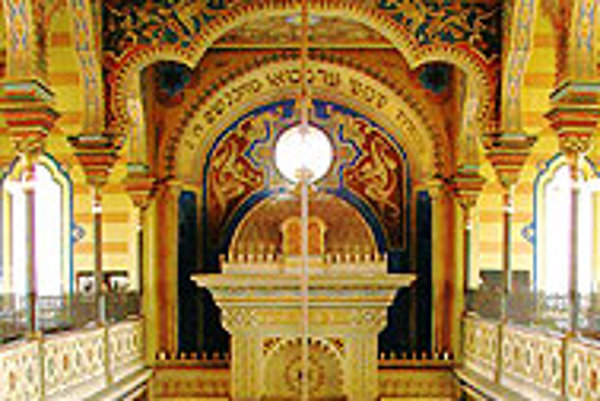 Font size:A-|A+0
A FUNCTIONING Orthodox synagogue in the eastern Slovak town of Prešov today houses the oldest Jewish museum in Slovakia that records the history of the community in the region. Roughly a decade ago, however, the decision over the synagogue's future caused a controversial debate within Prešov's Jewish community.

"In the late 1980s and early 1990s, American Jews wanted to buy the synagogue and move it to Los Angeles. The people of Prešov had to decide whether or not to sell it. But luckily the purchase didn't take place," said the museum's guide Imrich Konya. The money from the sale would have been used to develop the Prešov Jewish community.

The museum, established in the town in 1928, moved into the synagogue, which was built in a Moorish style in 1897, ten years ago. It is located on the synagogue's balcony, which runs around three sides of the building's interior, and used to be the traditional space reserved for female worshipers. It features the rich history of the community, whose first rabbi finished his career at Cambridge University, while the present rabbi held the position of High Rabbi for two years in Israel.

"It was the right thing to not sell it," Konya said. "The museum is important because there are very few Jews here now, and as they leave their memory also leaves."

Konya explained that in January 1945, when the war ended, the first Jews to return to Prešov decided which religious buildings they would keep in use. The synagogue was found in some disorder, but essentially preserved.

"There was never any reconstruction of the synagogue," he said. "Here, everything is practically the same as it was before the war."

These days, however, few people come to the services, which are held in the synagogue on Saturday, the Jewish day of worship. Sometimes there is no service at all, as, according to orthodox rules, no service can take place if less than nine men attend on Saturday. Lack of attendance is due to the average age in the community, which is over 70 years old.

"The Prešov Jews are old, so for everyone something hurts... When there's good weather they come and when there's bad weather they don't come," Konya said. He added that a special winter chamber with heating has been added to the building to make their attendance more comfortable, but more needs to be done.

The President of the Jewish Community in Bratislava, Peter Salner, said that he could understand that the decision about selling the synagogue in Prešov was a difficult task because the money coming for the synagogue "would have no doubt helped to revitalise Jewish religious life in Prešov, as well as in eastern Slovakia".

"I can imagine that, as there is another synagogue in Prešov, some people could think that selling the building would have been more useful than keeping it," said Salner.

The synagogue was the second Jewish religious building built in Prešov. Eventually five such buildings existed, though today there are only four left, and only this synagogue holds services. According to Konya, the other remaining religious buildings in Prešov are currently used commercially to support the community.

Salner said that the decision process regarding selling the synagogue opened "a very interesting" discussion.

"The question is whether it is more important to follow [Orthodox] traditions at any price, or to [first] try to recruit new people [to the faith] and then gradually build traditions. I don't think they [the Jewish community in Prešov] put it this way exactly, but this is the problem for all the synagogues [in Slovakia] - whether the building or the means for the development of the community are more important," he said.

The Bratislava community has contacts with some Jewish communities abroad - in Hungary, the Czech Republic, and Austria - but according to Salner they are not as intensive as they could, and maybe should, be.

"Basically, everyone deals with their own problems by themselves," Salner said. "I imagine that if we had the means that we need, and we knew how to use them in the way they should be used, the [Bratislava Jewish] community would start to function more effectively. And the younger people would be more interested in returning to traditions."

The Bratislava Jewish Community is working on reaching some of its younger members. For example, there is an after-school Jewish program that incorporates religion, culture, and education. Fifteen kids have applied for this coming school year.

"It is more than we expected, so now we have problems with space, and with teachers, and with all the other problems associated with the beginning of the school year," Salner explained. "However, if this, which we hope to be a long-term project, works out, it may be the beginning of a new future for the Bratislava community."

Returning to the subject of the synagogue, Salner agreed that the choice not to sell the synagogue was the right decision. "But, if this decision had to be made [in Bratislava], I would have doubts too and I would not see it [the sale of a synagogue] at all as an underhanded business. These are strategic decisions."

"If I was personally faced with such a decision, I would probably not sell the synagogue."