EVEN after five years in Slovakia, I have still not managed to fully understand the vagaries of Slovak bureaucracy (byrokracia) and customer service (služby zákazníkom). As far as I can tell, all Slovak companies and public institutions are required by law (although, admittedly I have never actually found the relevant act) to employ a certain percentage of staff whose sole job is to prevent customers from buying their products or clients from using their services. 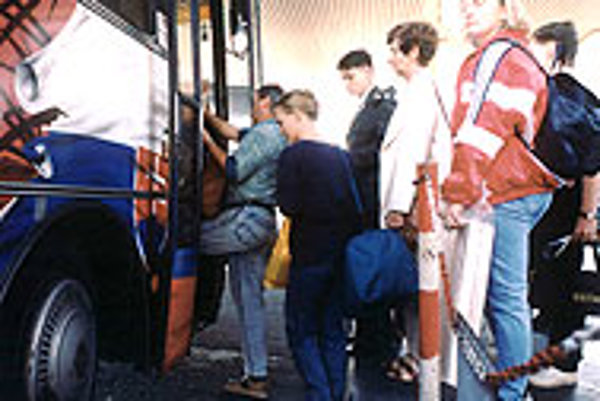 Font size:A-|A+
EVEN after five years in Slovakia, I have still not managed to fully understand the vagaries of Slovak bureaucracy (byrokracia) and customer service (služby zákazníkom). As far as I can tell, all Slovak companies and public institutions are required by law (although, admittedly I have never actually found the relevant act) to employ a certain percentage of staff whose sole job is to prevent customers from buying their products or clients from using their services. It makes the shopping experience often feel like banging one's head against a brick wall (ísť hlavou proti múru).

I once even made the mistake of calling for the management, not realising that there is a whole chain of command for these professionals. At the time, I was attempting to buy a pair of shorts at a large hypermarket. The price on the sale label said Sk300; the till said Sk400. When I showed the label to the checkout operator, her reaction amazed me: After simply tearing off the tag and throwing it away, she stated that the price was Sk400 and held out her hand for the money.

Somehow, I didn't lose my head (nestratil som hlavu). I asked to speak to a manager and was further amazed to find that the woman, standing behind me, was watching the whole affair. Anxious to protect the good reputation of the company, she responded: "The price says Sk400."

I walked away short of temper, and short of shorts. Once again, I had found myself at a dead end (uviazol som na mŕtvom bode).

Another brief example, before we get to the heart of the matter: On one trip back to Bratislava from the eastern part of the country, a bus driver went to measure my luggage (batožina) after I insisted that it was not too large to be "hand" luggage (a regulation 20cm by 30cm by 50 cm is transported without fee). After measuring my bag and finding it was several centimetres smaller than the limit on all sides, instead of apologising he simply said: "Hovorím vám, že je to príliš veľké. Platíte, alebo vystúpte." (I'm telling you it's too big. Pay, or get off). Not wanting to be stranded in Rožňava, I put my tail between my legs (stiahol som chvost) and climbed onto the bus, all the while muttering darkly about the vagaries of Slovak bus drivers. Needless to say, the bag fitted comfortably under my seat.

Neither of these incidents encouraged me to go back to use these businesses again. Gradually, Slovak business will have to wake up to the fact that the customer may not necessarily be right, but certainly deserves a good hearing.

As a result of such frustrating instances, I now find myself hesitant to bother to complain. Even before I start to voice my grievance, I have the feeling that it is a waste of time (strata času): I find myself wondering whether the bad taste left in my mouth (zlá chuť na jazyku) by bad service compounded with even worse complaint handling (reklamácia) makes it worth the effort.

However, if you feel inspired to attempt to right some rights, here are a few phrases that might help:

"This bill is not correct." - Tento účet nie je správny.

"I have been overcharged for this." - Zarátali ste mi viac.

"This food is not what I ordered." - Toto jedlo nie je to čo som si objednal.

"I bought this here yesterday, and it doesn't work." - Včera som to tu kúpil a nefunguje to.

"I would like to speak to your manager." - Chcel by som hovoriť s vašim vedúcim.

"You haven't given me the exact change." - Nevydali ste mi presne.

I have discovered, to my surprise, that writing to the companies does sometimes help. After struggling for three months to have my phone line transferred from one flat to another, a task that I was originally told should take three to five days, I went to complain. The staff showed no interest. So, I wrote to Slovak Telecom. They apologised, promising me a refund for the period when I was without a phone. I was shocked.

One last piece of advice, one that I am loath to give, but it unfortunately works: If your complaining fails to work in Slovak, switch to English. "Chcel by som diskutovať tento problem s niekým, kto hovorí po anglicky." (I would like to discuss this problem with someone who speaks English.)

Suddenly, your position goes from being someone who is interrupting the salesperson's quiet day, to being a valued customer. I look forward to when the opposite is true and Slovaks treat their own compatriots with at least as much respect as they treat us, the invading hordes of foreigners.