Railway layoffs in the pipeline

RAILWAY network operator Železnice Slovenskej republiky (ŽSR) will be laying-off white-collar employees from the firm's general directorate.
During the upcoming two years, ŽSR, which is one of Slovakia's biggest employers, will fire over 4,700 of its 22,000 employees in order to reduce its debts, which have reached almost Sk50 billion (€1.19 billion). 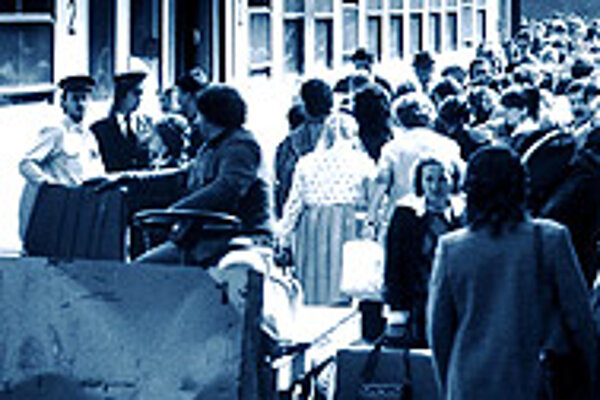 During the upcoming two years, ŽSR, which is one of Slovakia's biggest employers, will fire over 4,700 of its 22,000 employees in order to reduce its debts, which have reached almost Sk50 billion (€1.19 billion).

The job cuts will most dramatically concern the white-collar sector of the company's general directorate, where the reductions will hit 20-30 percent of employees. The number of regional directorates will be slashed from 25 to four, which will lead to the firing of an additional 200-300 employees, the financial daily Hospodársky denník has reported.

The radical reductions have been planned by the new leadership, which aspires to make the firm profitable within four years.

The company will transfer all activities not directly related to the railways to a different company, which also means that 2900 people will change their employer. By the move, ŽSR will get rid of its education, health care, and even its fire protection branches.

The state-run company hopes to save as much as Sk1 billion (€24 million) from the removal of non-core activities, and a further Sk900 (€21.4 million) in wage costs.

ŽSR's general director, Roman Veselka, told the daily Pravda that over the past ten years, the company's behaviour has been "far too generous and rather megalomaniacal".

The new management has been critical of using state loans for anything other than the development of infrastructure.

According to Veselka, the half-finished telecommunication projects of ŽRS have consumed almost Sk3 billion (€71.8 million), and an additional Sk1.5-2 billion (€35.9-47.9 million) would be needed to complete them.

The ŽSR state railway company, along with its accumulated debt from 1994 to 2002, was split into two firms in early 2002, leaving ŽSR in charge of Slovakia's rail network, while ZSSK (Železničná spoločnosť SR) took over transport and commercial activities.

The new ŽSR boss pledged that there would be no additional investments without firm financial backing, and the firm would be cautious when investing in repair work, only doing so in the case of an emergency.

The government, which in the past has not subsidised public transportation provided by ŽSR, will take over the liabilities of the railway companies ŽSR and ZSSK, up to Sk21 billion (€505 million), from January 2004. Transport Ministry officials have claimed that the move is not a settlement of the debts, but a transfer of the liabilities to the overall state debt.

Transport Minister Pavol Prokopovič believes that the debts from ŽSR and ZSSK could be settled by 2010. ŽSR spends more than Sk3 billion (€71.8 million) annually on paying its debts. However, the state still owes the company more than Sk11 billion (€263.4 million).

In mid-June, Ladislav Saxa resigned from the top post of rail network operator of ŽSR, citing health reasons. However, media speculated that an alleged abuse of about Sk1 billion (€24 million) by ŽSR influenced his decision to step down. The Supreme Audit Office has found that ŽSR had used various cabinet-guaranteed loans in conflict with existing rules. Veselka took over the post on August 1.