"HERE, it's the foxes that tell people good night," laugh the inhabitants of the easternmost Slovak village of Nová Sedlica.
Situated no more than three kilometres from Ukraine, and five kilometres from Poland, Nová Sedlica is the gateway to the Poloniny National Park, which has the greatest number of conserved old growth forests in Slovakia. 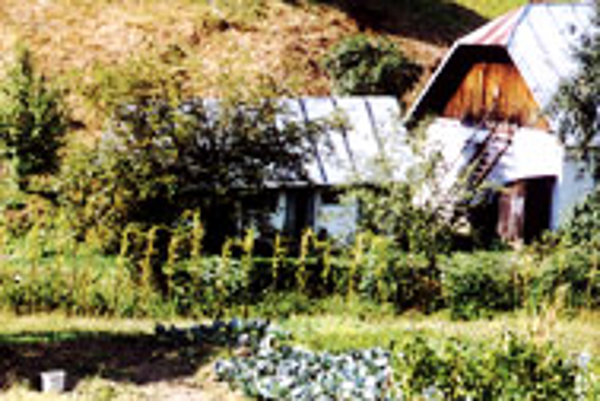 Font size:A-|A+
"HERE, it's the foxes that tell people good night," laugh the inhabitants of the easternmost Slovak village of Nová Sedlica.

Situated no more than three kilometres from Ukraine, and five kilometres from Poland, Nová Sedlica is the gateway to the Poloniny National Park, which has the greatest number of conserved old growth forests in Slovakia. It is one of the eight (formerly nine) villages of Ulič Valley, a micro-region centered around the municipality of Ulič, which, despite the park's beautiful natural environment, is on the verge of extinction.

The slowly dying out villages are not a new phenomenon in Slovakia. In the country's east, which is far distanced from the country's capital, depopulation is an increasing problem. And the entire Ulič Valley is one of the most markedly obvious cases.

Young people often leave the villages there, for jobs in larger towns. The elderly cannot do the hard work that is needed in the hilly environment, and their large houses eventually decay from neglect. Few children are born there, so most of the schools have been closed. The bus schedule can easily be memorized, and to make an appointment with a doctor takes a whole day. Only a fraction of the region's natives return there to retire.

"People are no longer born here, people only come here to die," says Štefan Mika. He and his wife returned back to their native village of Runina, the most isolated village in the region, but as they say, "it's just the right place for enjoying our retirement". These days, they work on repairing their family home.

"Look, I don't have time to talk to you, I have to work. The village has moved. It's no longer here but over there," Mika says, pointing to the village cemetery. "It's dying out here. The village used to be larger. There were children, and there was life. Now, the young ones have left for work; only the old ones stayed."

Apart from the occasional sound of chainsaws on wood, there is an unbelievable silence everywhere one moves. The mainly beech forests and vast mountain meadows, called poloniny, after which the national park was named, are home to protected plants and various kinds of animals. Sometimes, bison and moose cross over to the area from nearby Poland.

The Poloniny region is one of the last permanently settled territories in the country. The first documented settlements date from the year 1451. Up to the 1980s, the region expanded to include as many as 17 municipalities, but during that decade, seven of them had to be evacuated due to the constuction of the Starina water dam. According to the Poloniny National Park Administration, there are 3,800 inhabitants, mainly of Ruthenian ethnicity, currently living within the regions' borders.

While most of the citizens started to leave the region after the fall of communism in 1989, the 1940s also had a negative impact on the population in the region. According to census statistics, there were 6,398 citizens living in the Ulič region in 1940, compared to 5,028 in 1948.

The most isolated village in the region, Runina, had 370 citizens in 1940. The latest census in 2001 revealed that that number has decreased more than four fold since then - to 88 citizens. The main reasons for the decreases were the war and the migration of the inhabitants to seek work.

Another village that does not sit on the main road leading to, and connecting most of the villages in the region is that of Ruský Potok. It has also seen almost a four-fold drop in the number of its citizens, since the 1940 census.

"We are a small municipality with high unemployment. People leave to towns for work," said Anna Kovaľová, who has been the village's mayor for ten years. "However, we have the highest number of young people within the Ulič region - 60 [inhabitants] under the age of 40."

Kovaľová is one of three female mayors in the region, all named Anna. The men there say that women should rule over men. They are satisfied with the work their mayors do, which mostly involves trying to solve the problems of high unemployment.

"The nature around here is beautiful. The people, who mostly worked on fields and took care of cattle, got used to the hard conditions. They would be glad if the government increased social benefits, but they don't complain much," says Kovaľová. The monthly unemployment benefit in Slovakia is Sk1,450 (€35).

Kovaľová, as well as the mayor of Topoľa, Anna Chomová, say that if there were money to do so, they would invest it into attracting tourism to the region. Apart from nature, the pride of the villages are the well preserved 17th century wooden churches that can be found in four of the villages.

"I can see the future in a bad light. The earth here is not fertile, no crafts have been preserved. The municipality would invest into tourism, if it had the finances. People are nice to each other here, if only there was higher employment, they would not envy each other so much," says Chomová.

Until 1972 the citizens worked on their own fields and had their own cattle. Even the communists came late to the region - the rest of the country's property had been nationalised for almost 25 years by then.

"In the past, each family used to own one or two cows. Now there are no more then six in the whole village. The hillsides were never so shaggy as they are today," says Kovaľová.

The cultivation of soil, and keeping cattle, have always been the main sources of income in the region. The communist nationalisation changed that however, and today the youth flee the villages for what they say is "less difficult work".

"It's hard to grow anything here. To keep cattle, one has to work at it non-stop," said Ladislav Choma, 33, who runs a small logging business in Topoľa, and still scythes grass for his father's cattle.

"We used to go to scythe up to Bukovec [a 930-meter hill, ed. note] in the past, but today, people don't scythe even behind their houses. Come here in ten years, and you will see that these meadows over here, will be overgrown," says Choma.

The 73-year old Mária Haňčeková from Runina, which is 560 metres above sea level, also remembers the times she used to go raking hay at Ďurkovec, at 1,188 metres.

"Everybody in the village had cattle, mainly cows and horses. Now there are only three cows here. People are old. Who will work?" asks Haňčeková, who has been a widow for 15 years.

Apart from the hard work, the citizens also talk about the cruel winters in the region.

"Winter here is hell," says a 90-year old Runina citizen, while sipping a beer in front of his house. His 70-year old wife nods her head as she hands him a shot of some kind of alcohol. "Around 50 cubic metres of wood is needed for the winter. One has to keep a fire all the time, and usually, we only heat one room."

The man then begins to tell his story: He worked as a miner for 40 years, but since suffering a stroke, he is unable to walk. When asked about seeing a doctor, he started to laugh. "What is he good for? My drugs are here," he says, pointing to his drinks. "My generation is dead; only, I cannot die."

But while the elderly are settled with their lives in the villages, the youth want to leave.

"Except for my only friend here, there is nobody around my age," says Mária Vosková, a 20-year old student who attends the Košice University, and helps at a local shop in Topoľa, her home. "I cannot wait until the summer holidays end and I go back to school."

"When I was 13 or 15, there were many children here, but now there are none. Nobody young comes here. Only some of those who have left come back to spend their retirement here. The old ones will die and the young ones leave. Nobody will stay here," she says.

An innkeeper, in his early 50s, working in the pub next to the shop, has a different opinion: "This is the most beautiful place. There's beautiful nature, clean air, and good people. Where would I go?"