Illustrators do not give up

THEY do it for children. But it is they who actually end up most enjoying the work. They are the adults who illustrate books for children.
"It's not a problem to sit down and draw a picture. The problem is to publish it. Today's children read too little," said Iku Dekune from Japan, the winner of the Biennale of Illustrations Bratislava 2003 (BIB). "But I want to keep illustrating." 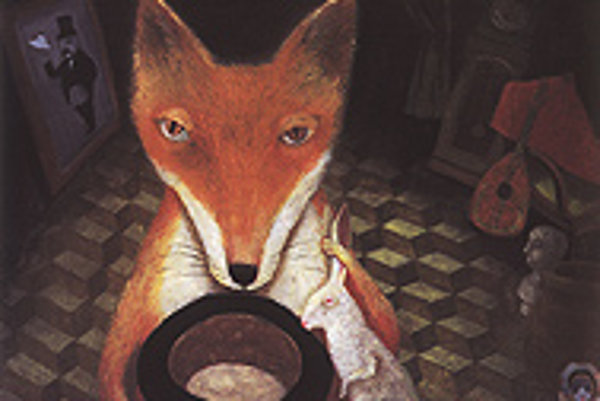 Font size:A-|A+0
THEY do it for children. But it is they who actually end up most enjoying the work. They are the adults who illustrate books for children.

"It's not a problem to sit down and draw a picture. The problem is to publish it. Today's children read too little," said Iku Dekune from Japan, the winner of the Biennale of Illustrations Bratislava 2003 (BIB). "But I want to keep illustrating."

Dekune was selected out of 311 artists from 38 countries, who submitted 2,398 entries to this year's contest of book illustrations for children and youth, the Biennale of Illustration Bratislava. Despite the fact that classical illustration is being pushed out by other, electronic media, the number of submitted illustrations was similar to that of previous years.

The works are currently exhibited at the House of Culture on SNP Square (opposite to the Old Market). A collection of works by French illustrator Eric Battut, who won the Grand Prix 2001, and work by the British Quentin Blake, last year's winner of the Hans Christian Andersen Award, are displayed at the house as well, on the middle floor. Also exhibited there is a collection, Noma Concours, presented by the regional United Nations Educational, Scientific and Cultural Organisation (UNESCO) centre in Tokyo.

According to this year's head of the international jury, Renate Raecke from Germany, the jury spent four entire days choosing the winning works. "We started with a total of 311 and had to come down to 11 winners. It was tough," she said.

Compared to the last competition, two year ago, the jury noticed higher artistic skills and a significant improvement in using computers.

"Apart from artistic skills, we also searched for the innovative approaches, craftsmanship, imagination, and colours the illustrators use. We focused on how the artists react to the world's happenings, and how they capture [the topics] - what they offer to today's child," Raecke explained.

"There are many countries who have high quality illustrators. Slovakia is one of them," said Raecke, adding that there have been Slovak winners in the past.

Due to the effects of globablisation and international co-production, she said the artists work on an international level. Even though the jury is still looking for individual handwriting, the main criterion is clear - the illustrations have to be understandable for children all over the world. And each year brings new topics.

"Because of this so-called Harry-Potter-mania, many witches and similar characters can be seen captured in today's works. Suddenly we are interested in witches and magic again," Raecke said.

"I think that [the illustrations] are mostly about finding a place within what people think is appropriate for children. We were also very much looking for those who could open a child's mind in a new direction. For instance, the Spanish illustrator Antonio Acebal [winner of the BIB Plaquette], made a book about violence in Afghanistan and about the Twin Towers coming down, in a way that children could understand it."

The international contest of book illustrations for children and youth, BIB, has taken place every odd year during September and October since 1965, when the so-called "zero year" was held. It has been organised by Bibiana, the international house of art for children, under the auspices of UNESCO and the International Union of Children's Books (IBBY). According to its organisers, BIB is the world's most significant event that brings children's book illustrators together.

BIB's 19-year history has seen almost 4,500 artists from 84 countries exhibiting over 40,000 original illustrations. Up to today, over 500 works have been awarded during the BIB's history. And while illustrators from abroad come to display their works in Slovakia every second year, Slovaks also present theirs abroad.

"The older, renowned [Slovak] illustrators are better off, compared to the younger ones. They are asked by foreign countries to illustrate famous fairy-tales; for example, Dušan Kállay and Kamila Štanclová were recently asked to illustrate the entire body of work by H. C. Andersen," said Dagmar Srnenská, an art historian, who held an international symposium on September 6 entitled the Phenomenon of Postmodernism in Today's Illustration for Children.

"Young Slovak postmodernist illustrators publish a maximum of two illustrated books a year. It all depends on publishing houses, where the situation is not presently good. In the past, illustrations could also be found in books for adults, but this has almost completely vanished," Srnenská said.

The jury's head, Raecke, and historian Srnenská agree that there are less illustrations because of other media, such as computers and TVs.

"When I was a child, the book was my only window to the world. Today's children have many windows. For sure, they will use the others from time to time as well," said Raecke.

Srnenská: "Despite the fact that we are living in a technical, progressive period, there are many people who will not let the work of [classical book] illustrators fall, particularly not the illustrators themselves."