JIM Carrey, he of the elastic face and the occasionally talking buttocks, is just not a nice guy. Well, Jim Carrey the human being may be kind and compassionate. But his ingrained screen persona is just not conducive to creating roles of genuine warmth, innocence, and "all-American" righteousness. 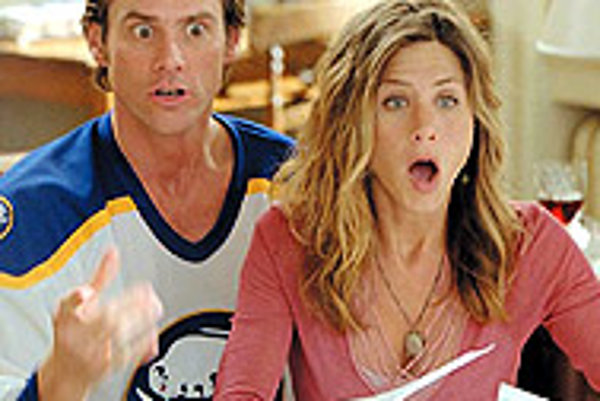 JIM Carrey, he of the elastic face and the occasionally talking buttocks, is just not a nice guy. Well, Jim Carrey the human being may be kind and compassionate. But his ingrained screen persona is just not conducive to creating roles of genuine warmth, innocence, and "all-American" righteousness.

In short, Jim Carrey is no Jimmy Stewart, perhaps the actor who best epitomized these qualities within the classic Hollywood system. Nevertheless, Carrey's latest vehicle, Bruce Almighty, casts him in the archetypal Stewart role: the lovable American "every-man".

The Stewart comparison is more than apt, as becomes painfully evident from early in the film.

Carrey's character, Bruce, is a down-on-his-luck television news reporter with a doting girlfriend, Grace (Jennifer Aniston). Unable to acquire the high-profile stories he needs in order to win the recently vacated head anchor position, Bruce begins to whine and complain to God. A generous sort, God (Morgan Freeman) gives Bruce a chance to turn around his life via a lesson in which he endows the lowly reporter with all of his powers, enabling him to recognize his solipsism and realize who and what actually matters in life.

Essentially, the story is a reworking of Frank Capra's It's a Wonderful Life, starring Jimmy Stewart (something Bruce Almighty's creators won't allow to escape you, as at one point, Bruce wills Grace's television to show a scene from Capra's film, in which the dialogue "cleverly" describes a previous scene between Carrey and Aniston). While both films are quite sentimental and overwrought, Capra's film comes much closer to working, due to Stewart, an actor whose sentimentality is virtually impossible to not believe, or at least forgive.

An essential part of Bruce Almighty's problem lies in the script: Bruce is continually shown as selfish and oblivious. There is no indication at all why Grace would love this careless, thoughtless buffoon, apart from the fact that she is the designated love interest.

But, the deeper problem lies with Carrey: He is simply not believable when trying to be innocent and genuine. There is always an element of darkness in Carrey's humour; thus, the film's best scenes are those in which he lets his anger and frustration take him - when he is supposed to be acting like a jerk. Unfortunately, these scenes are smothered by the film's attempts at sweetness and sentimentality.

Thus, if Hollywood wants to make Carrey into the next Jimmy Stewart, perhaps it should stop looking towards Frank Capra for inspiration. Instead, it should turn towards Alfred Hitchcock, who brilliantly exploited Stewart's persona to explore madness and obsession, in Vertigo and Rear Window.