IN THE MOST WATCHED event last week in Slovakia, Pope John Paul II, completing his third visit to the post-communist country, attracted hundreds of thousands of pilgrims, who attended the three masses that he celebrated.
Top Church and state officials said they were happy with how the three towns in which the Holy Father held masses organized the high profile events, which hosted hundreds of domestic and international media watching the Pope's 102nd international trip. 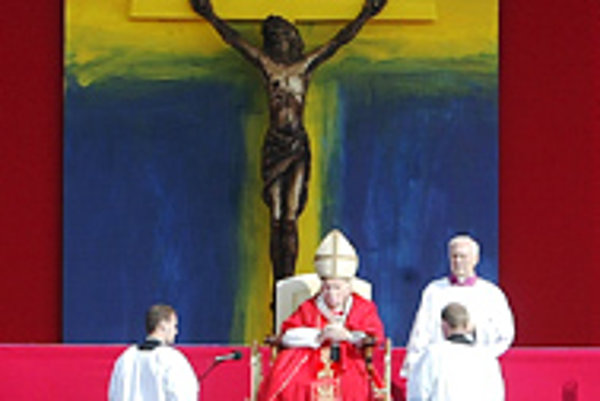 Font size:A-|A+
IN THE MOST WATCHED event last week in Slovakia, Pope John Paul II, completing his third visit to the post-communist country, attracted hundreds of thousands of pilgrims, who attended the three masses that he celebrated.

Top Church and state officials said they were happy with how the three towns in which the Holy Father held masses organized the high profile events, which hosted hundreds of domestic and international media watching the Pope's 102nd international trip.

The frail Pope, 83, brought a few messages to the predominantly Catholic country of Slovakia: He spoke of united Europe's faithfulness to its Christian roots, addressed the Slovak youth as the future of the country and the Catholic Church, thanked the Slovak nation for its fidelity to Christ, and encouraged it not to be ashamed of its Catholic traditions.

According to the 2001 census, 84 percent Slovaks said they believed in God, and nearly 70 percent of those reported themselves as Catholic.

The Pontiff's trip, however, also brought concern over his health. The Pope has Parkinson's disease, as well as hip and knee ailments. His shaking hands and slurred voice have not only provoked concern, but have even led some to speculate whether the Slovakia trip would be the Pontiff's last.

On occasions during the trip, the Pope was clearly suffering from pain, but while international and domestic media speculated on what they said was the Pope's visibly deteriorating health condition, pilgrims who attended the masses admired the strength and determination with which he carried on with the demanding trip.

Because of his "physical limitations", as papal spokesman Joaquin Navarro-Valls put it, aides had to finish most of the Pope's speeches in Slovakia.

For those who, in some cases, travelled hundreds of kilometres to attend a mass performed by the Pope, however, the visit was a demonstration of John Paul II's dedication to his service in the Catholic Church.

"I am incredibly happy that I have the opportunity to see John Paul II at such a close distance and I pray for his health. The fact that he came here despite his illness is admirable and demonstrates how dedicated he is to his mission," said Elena Horňáková, 62, one of the 200,000 pilgrims who gathered at the mass in Bratislava's suburb of Petržalka on September 14.

Another attendee said: "His strength comes from the inside, despite the fact that the body is frail and ageing."

The masses and all transportation were accompanied by top security measures throughout the four-day trip.

Nearly 500 specially trained bodyguards guarded masses in Banská Bystrica, Rožňava, and in Petržalka, to secure the safety of the Pontiff, who is among the world's most guarded men.

No emergencies were reported throughout the visit, although just one day before the Pope was scheduled to arrive in the country, head of the nation's Office for the Protection of Constitutional Officials Ján Packa revealed to media that a would-be assassin was threatening to kill the Pope.

Summarising the performance of his specially trained bodyguards, Packa said: "My people slept two or three hours at most during the visit and they performed excellently."

Top state officials and the representatives of the local Catholic Church were also happy with the organization of the Pontiff's stay in Slovakia and hoped his messages would bring some peace and encouragement to the central European nation that is on its way to the EU.

Upon his arrival to the Bratislava airport on September 11, the Pontiff said: "In a short time, your country will become a member of the union of European nations. My beloved, do contribute with your rich Christian tradition to the building of an identity of the new Europe and do not comfort yourselves only with searching economic advantages."

Slovakia's speaker of parliament and head of the ruling Christian Democrats (KDH), Pavol Hrušovský, said that the papal visit met all his expectations.

He appreciated that the Pope directed his message not just to the Slovak nation as a whole, but that he also spoke specifically to the young Catholics, in whom the Pope sees the future of the nation and the Catholic Church.

Hrušovský also said that despite the Pope's fragile health condition, "it is evident that he is full of energy and spirit. He is able to overcome the drawback of physical weaknesses by the greatness of his ideas."

PM Mikuláš Dzurinda said to journalists on September 14 that during the papal visit, "Slovakia received strong encouragement for the upcoming, difficult period."

During his last sermon, in Petržalka, the Pope thanked God for the people of the Slovak nation, who "even in difficult times, managed to maintain their fidelity to Christ and his Church".

At the mass, the Pope beatified two clerics who, in the 1950s under the oppressive communist regime that collapsed in 1989, were persecuted and died as a result of the oppression. Nun Blanka Schelingová and priest Vasiľ Hopko were jailed by the communists and suffered years of torture and humiliation in prisons. In the Vatican, beatification is the last stage before sainthood.

Marian Gavenda, spokesman for the Slovak Bishop's Conference, hoped that the papal visit would help to ease the often strained relationships between Slovaks and their official representatives and bring "peace and mutual tolerance to all of us".