FORMER Transportation Minister Gabriel Palacka, who resigned from his governmental post in 1999 following a series of corruption scandals, has recently been selected to represent Slovakia in the European Bank for Reconstruction and Development (EBRD).
The decision has been heavily criticised by the opposition and has also caused concern among many ruling coalition politicians. 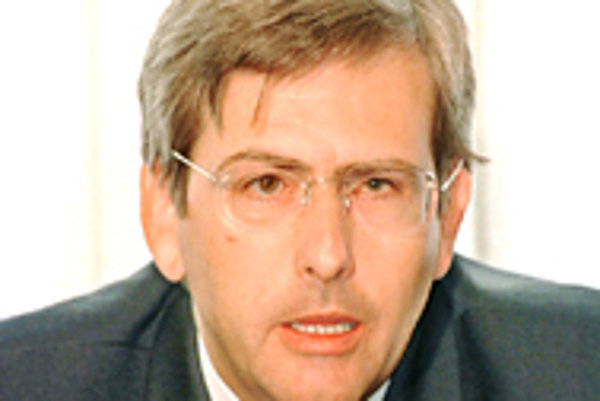 Font size:A-|A+
FORMER Transportation Minister Gabriel Palacka, who resigned from his governmental post in 1999 following a series of corruption scandals, has recently been selected to represent Slovakia in the European Bank for Reconstruction and Development (EBRD).

The decision has been heavily criticised by the opposition and has also caused concern among many ruling coalition politicians.

Palacka, a prominent member of the coalition Slovak Democratic and Christian Union (SDKÚ), has been chosen, out of four candidates, by the Finance Ministry for the position of an adviser to the bank's general director for the constituency containing Slovakia, the Czech Republic, Hungary and Croatia.

"I'm convinced that Palacka does not have the basic moral and ethical predisposition required for the new position, and there is also a question mark over his professional qualifications," said Monika Beňová, vice-chairwoman of the opposition Smer party and head of the parliamentary committee for European integration, at a press conference on September 12.

Beňová claimed that it is "unethical and incorrect" to appoint a person who was forced to "leave the government due to suspicions of corruption" into an EBRD position.

"Two months ago, when we found out that Palacka had started working at the Finance Ministry, we started pointing out that the only reason [why he had accepted a job at the ministry] was that he would be interested in a job at the EBRD," Beňová said.

In August, Peter Papánek, adviser to Finance Minister Ivan Mikloš, said the ministry did not have any information indicating that Palacka was interested in a Euro-bureaucratic position, according to the TASR news wire. Later it was confirmed that Palacka is in fact interested in the position.

"I'm convinced that he will do his work professionally, because he met the selection criteria and placed first among the participants," said Mikloš on September 16, according to TASR.

EBRD representatives say they have no powers over who gets selected.

"Palacka is coming in as an adviser to the board of directors. That [decision about the] position is not made by the EBRD; it's made by the government of the country. It's a government's decision, they have every right to appoint whomever they wish to," Jazz Singh from EBRD's media relations department in London told The Slovak Spectator.

In his new position, Palacka will not have direct decision-making powers.

"My understanding is that he will very much work for the director. He will work with him on the preparation of briefing points on areas of interest requested by the constituency. He will review, analyse, and summarise projects and policy documents, provide information to the constituency authorities, and will also attend board meetings and handle inquiries and correspondence," said Singh.

"[He will] also maintain a direct link between his country and the bank," he added.

Based on information from the EBRD press officer, Palacka seems to have the experience usually required of people in his new position.

"In terms of qualifications - it's common for someone to have worked for either a government institution or another international financial organization. But I think it's more the former - having been the representative of a government body," said Singh.

Palacka is a veteran politician. In the years 1991 and 1992, he worked as a director of one of the sections at the Transportation Ministry.

In 1994, he was briefly deputy transportation minister and after the autumn's parliamentary elections Palacka found himself in parliament as an MP for the opposition Christian Democrats (KDH), of which he was a member until he co-founded the SDKÚ in 2000.

In the 1998 parliamentary elections, he ran on the ballot of the Democratic Coalition Party (SDK), a union formed by five smaller parties - among them the KDH.

After the 1998 elections the SDK gained the most seats in the newly formed government headed by Mikuláš Dzurinda, and Palacka became transportation minister.

However, the days of his reign at the ministry were characterised by a series of scandals.

Among them was the controversy surrounding Slovak Airlines (SA). At the time Palacka took office, SA, co-owned by the Transportation Ministry, enjoyed the status of the official national carrier, a position granted to it by Mečiar's government.

In November 1998, Palacka's ministry took away SA's air-transport license and later attempted to confiscate its three airplanes. The ministry even signed a contract, in which it agreed to rent the planes to a private company.

However, a Bratislava court decided the ministry had no rights to dispose of the planes in such a manner, and the ministry eventually reached an out-of-court agreement with SA and returned the planes. Throughout the case, Palacka was often unable to publicly explain the actions of his ministry.

In June 1999, Palacka decided to cancel a tender for the operator of the GSM 1800 mobile telecommunications network. At the time, there were two mobile telecoms companies operating in Slovakia using the older GSM 900: Globtel, which later became Orange, and Eurotel.

Instead of opening the market to a third company, the decision was made to split the license for the use of this frequency between Eurotel and Globtel. At the time, media brought reports that Palacka may have been bribed by the two companies, which aimed to prevent unwelcome competition from entering the market.

At the time, Palacka argued that his decision in fact protected potential investors, as their investments, he claimed, would not bring the hoped-for returns, due to the already highly saturated market.

In April 1999, Palacka decided that a consortium headed by Deutsche Bank would act as the financial and legal adviser for the privatisation of Slovak Telecommunications (ST). It was this tender that immediately preceded Palacka's resignation from his ministerial position.

The government's audit office was asked to investigate the selection process, as there were suspicions that the law had been violated and the results manipulated. That office presented its findings in late July 1999.

The audit revealed that the ministry had in fact violated the valid legislation, which Palacka himself confirmed in early August, but he stressed that the violations were only of a procedural nature, did not influence the outcome of the tender, and were made in good faith.

When defending his ministry's actions, Palacka made a comparison that made headlines:

"At some point, every driver is a red light runner; it happens and it is a violation of the law. But, as long as it happens at night, at a place where there isn't a soul around, though it may still be a violation of the law, obviously you didn't cause any damage to anyone," Palacka said to excuse his office's actions and added that laws are being broken at all ministries.

Since, in Palacka's opinion, the ministry's actions didn't do any harm, he refused to take personal responsibility.

Nevertheless, on August 9, Palacka decided to resign, citing "media attacks" as the main reason. His successor was Jozef Macejko.

PM Dzurinda then expressed his regret at losing one of the "pillars of his government". The media has described Dzurinda and Palacka as close friends.

Together they left the KDH and formed the SDKÚ, where Palacka acted as party treasurer. He no longer holds that position, but he remains one of the 14 members of the party's presidium.

The year 2002 saw Palacka involved in yet another corruption scandal, which led to the forced resignation of yet another transportation minister.

Slovak Railways opened a tender for the supply of 35 train sets in the summer of 2001. The two hottest candidates included a consortium headed by a Swiss company called Stadler and the French Alstom.

Stadler, concerned that the tender may not have been transparent, turned to the Swiss president, who in turn wrote to Slovak President Rudolf Schuster, asking him to intervene in the matter.

Macejko was ousted out of the Transport Ministry due to allegations that he tried to interfere in the tender in favour of the French producer.

Palacka came into play when media published excerpts from a letter an SDKÚ MP and the former Bratislava mayor, Peter Kresánek, sent PM Mikuláš Dzurinda, in which he wrote that "Gabo handles the matter based on the fact that from the party's perspective, both companies have the same background".

Media have speculated that the "Gabo" mentioned in the letter is Gabriel Palacka, and that "same background" means that the amount both companies were willing to provide to SDKÚ for getting the deal was the same.

The SDKÚ have denied any allegations of corruption, and Kresánek was fired from the SDKÚ.

Despite the fact that Palacka has never been convicted or even tried for any illegal activities, some coalition politicians seem to have a hard time hiding their disappointment at his appointment.