THE LIBERAL New Citizen's Alliance (ANO) party wants to reach an agreement with its conservative coalition partners over a law it says is a vital part of the country's legislative commitment before entering the EU in May 2004.
ANO representatives said the approval of an anti-discrimination law, which the former cabinet, led by current PM Mikuláš Dzurinda, had promised but failed to pass during the previous election term, must be finally achieved. 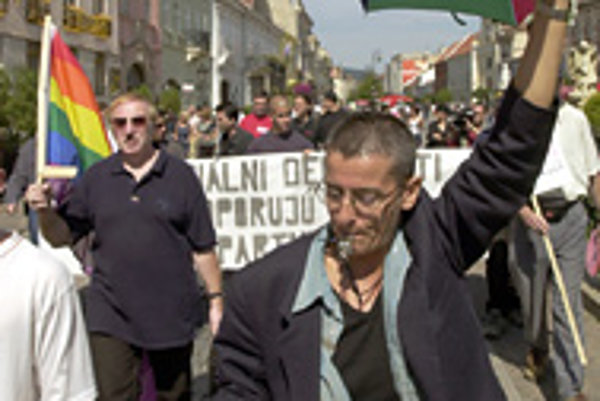 Font size:A-|A+
THE LIBERAL New Citizen's Alliance (ANO) party wants to reach an agreement with its conservative coalition partners over a law it says is a vital part of the country's legislative commitment before entering the EU in May 2004.

ANO representatives said the approval of an anti-discrimination law, which the former cabinet, led by current PM Mikuláš Dzurinda, had promised but failed to pass during the previous election term, must be finally achieved.

The law would grant non-discrimination rights in various spheres of life to members of social, racial, sexual, and other minorities - including women and disabled people; it would also ban and introduce punishment measures for discriminating against individuals on the basis of their religious faith or political opinions.

Though PM Dzurinda, leader of the Slovak Democratic and Christian Union (SDKÚ), has remained diplomatic in his response to the ANO plan to address the issue in the upcoming coalition council meeting, a senior coalition member, the conservative Christian Democrats (KDH), continues to reject the law. The KDH claims that the EU has never required Slovakia to pass legislation that, if passed, would gradually enable homosexuals to get married and adopt children - issues that the KDH strictly opposes.

Even in the EU, there are states that do not presently have legislation similar to this, which was recommended to current and future members by senior EU bodies to ensure legal equality for all members of their respective societies.

ANO MP Eva Černá, who is a member of the cabinet's special commission set up to resolve the anti-discrimination issue, said that in her frequent meetings with EU officials, her EU counterparts have been highly interested in how Slovakia intends to resolve the issue.

"They said that they don't care whether we have a single anti-discrimination law or we insert [anti-discrimination clauses] into individual laws, but they want us to have the legislation resolved by the time we enter the EU," Černá said.

The latter solution seems more likely to ensure Slovakia's compliance with the EU recommendations. KDH favours the strategy of reviewing all existing laws, but those whom the legislation is expected to help would prefer to have legislators approve a single anti-discrimination law.

Mariana Šípošová, spokeswoman with the Otherness Initiative, a gay and lesbian umbrella organization, said to The Slovak Spectator: "For us, as well as for other minority groups, it would be more acceptable to have a single anti-discrimination law approved."

"It would also be more simple because approving one law is less time-consuming than going through all the respective legal norms, as the KDH are suggesting," Šípošová said.

KDH chairman Pavol Hrušovský has restated several times since the debate started that his party refuses to approve a single anti-discrimination law, seeing it as a gateway for homosexuals to claim adoption and marriage rights equal to heterosexual couples.

"We have other, more serious problems in Slovakia, and I am asking: what do we need the anti-discrimination law for?" Hrušovský said.

"We are prepared to revise laws if we find that they involve elements of discrimination. We are ready to eliminate those elements."

In one TV discussion, Hrušovský even attacked ANO chairman Pavol Rusko, who, while insisting that the country needed the anti-discrimination legislation, had accused KDH of refusing the law simply because it conflicted with the Christian political agenda.

Hrušovský then replied: "But I am asking you a specific question - do you want homosexuals to be able to get married in Slovakia? Do you?"

Homosexual activist groups see this as a clear indication of KDH's attitude towards the minority.

"They [KDH] are clearly intolerant of homosexuals," said Šípošová.

The anti-discrimination law was prepared by Pál Csáky, Deputy PM for EU integration; on September 1, the cabinet initiated a campaign promoting the legislation.

But the draft has remained in Csáky's drawer, and the campaign has been marked with a minor scandal: the cabinet logo had to be pasted over shortly before the distribution of the large-scale campaign posters.

This immediately prompted speculation that the move was a result of KDH's opposition to the legislation and consequently also to the Sk1 million (€24,000) cabinet campaign. In addition, the state-run Slovak Television (STV) has refused to air ads that were also part of the cabinet campaign, with STV's manager stating that the spots lacked necessary information value.

Most recently the opposition Smer party announced at the start of September that it would propose its own draft of the anti-discrimination law, building its proposal on the cabinet's draft.

Although some opposition parties, such as the Slovak Communist Party, have already said they will support the draft when it comes to parliament, ANO refused to speculate whether it would back the law if it fails to be agreed upon by all the ruling coalition members.

"We don't want to speculate on whether or not we will support Smer's proposal," ANO MP Jirko Malchárek said to the Slovak daily SME.