Germans not missing home in Bratislava

THE GOETHE Institute in Bratislava is often described as the embassy of German culture. It is not built on any one-sided promotion of German culture in Slovakia but rather on cooperation and permanent communication through the language of art and literature.
Being a non-commercial centre with more than 125 institutes in 76 countries, and 15 branches in Germany, the institute has not only brought German culture to Slovakia, but has also opened avenues for young Slovak artists to present their works in Germany. 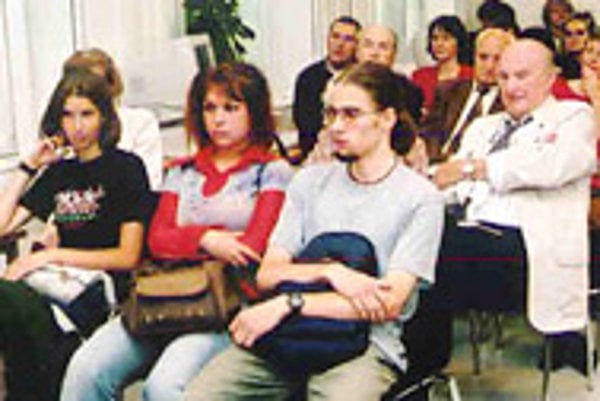 THE GOETHE Institute in Bratislava is often described as the embassy of German culture. It is not built on any one-sided promotion of German culture in Slovakia but rather on cooperation and permanent communication through the language of art and literature.

Being a non-commercial centre with more than 125 institutes in 76 countries, and 15 branches in Germany, the institute has not only brought German culture to Slovakia, but has also opened avenues for young Slovak artists to present their works in Germany.

Its director, Dr. Manfred Heid, who took the post in June 2002, ardently explained that the institute wants to focus on the younger generation, rather than only reviving reminiscences of those old Bratislava locals who spoke only three languages: Slovak, German, and Hungarian.

The philosophy of the institute perfectly matches that of the overall European Union enlargement process. According to Dr. Heid, people are tired of official talk about the EU, and it is only culture that can open up the gates for nations, and provide them with a forum to meet.

"You have to live Europe," Dr. Heid claims, listing a wide range of cultural happenings including workshops, book readings, and exhibitions that his institute offers. It also takes an active role in several cultural events hosted by Slovak organisations and associations, and brings Slovak artists together with their German colleagues.

Dr. Heid explained that the institute does not want to be only Bratislava-centred, and will try to stretch its activities even more to other parts of Slovakia. It already has reading rooms in Košice and Banska Bystrica, and some efforts have been made to reach children of the German minority.

However, Dr. Heid wishes that the institute had even more of an opportunity to send young Slovak artists, like Michal Hvorecký, Slovakia's best-selling young writer, to Germany. He admits that the greatest problem is that the Slovak state institutions that could promote culture have very limited funds.

"Still, one of the most important things that the Goethe Institute can do for these young people is to link them to institutions, and help them to develop contacts," Dr. Heid explains. He lists several enthusiastic Slovak curators, and activists like Juraj Čarný, Mária Rišková, and Viera Janečková, who runs the Trnava-based Koniarek Gallery.

When asked about Slovak openness to German culture, Dr. Heid explained that "Germans will always feel at home here." He admits that Bratislava has become his second home, and perhaps this is the reason why Germans living in Slovakia do not have the need to bind together. This is partly because their motherland is not that far away, and also because there is comfort in the similarity of the two cultures. He enthusiastically describes attending the Raca wine festival, and eating gus with lokše (a thin pancake made of potato dough.)

Leading up to the country's EU entry, language training is becoming more important than ever before. However, Dr. Heid explains that the interest in the German language has always been intense; thus, providing language training remains one of the core activities of the institute. The institute has 250 students enrolled for one term (3 months).

The institute has a distinguished library, which is gradually being transformed into an information centre, providing data and information on all actual aspects of cultural, social, and political life in Germany. The library, which has already presented books to different Slovak institutions, hosts approximately 100 visitors per day.

When asked about the promotion of Slovak culture abroad, Dr. Heid suggested that it is partly a question of funds, but then, it is also about more than money. "It is not easy to promote the culture of a small nation," Dr. Heid says.

According to him, it is a challenge that Slovak centres operating abroad face. These centres often focus on promoting traditional folk culture, instead of focusing on the young generation, and preparing attractive programmes for them.

Highlights of the Goethe Institute's programme for the autumn and fall of 2003:

September 29
An exhibition of 25 illustrations to a novel by Nobel Prize laureate Gunter Grass published in 1977.

November 29
Photo exhibition featuring Ramune Pigagaite, who will present "People of My Town."