Railroads and the arts connect in Žilina

SLOVAKIA'S newest independent art centre, Open Cultural Space Stanica, will add a new junction to the Žilina railroad network. Stanica means station, but the location of the space, at Žilina-Zariečie, is officially at the first stop on the Žilina-Rajec train line, which is run by railroad operator Železnice Slovenskej republiky (ŽSR).
After the centre opens, on September 26, the stop will continue to be part of the railroad network, with diesel trains passing through seven times a day in each direction. 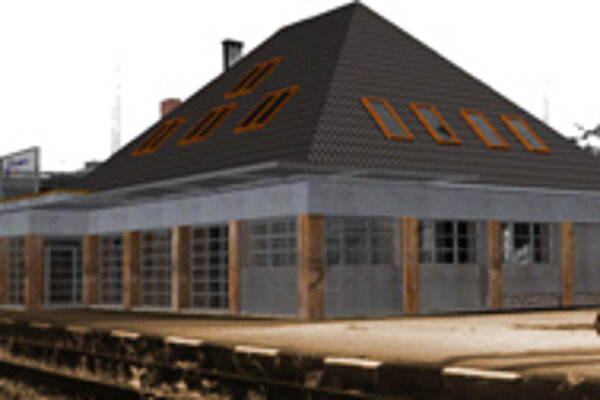 Font size:A-|A+0
SLOVAKIA'S newest independent art centre, Open Cultural Space Stanica, will add a new junction to the Žilina railroad network. Stanica means station, but the location of the space, at Žilina-Zariečie, is officially at the first stop on the Žilina-Rajec train line, which is run by railroad operator Železnice Slovenskej republiky (ŽSR).

After the centre opens, on September 26, the stop will continue to be part of the railroad network, with diesel trains passing through seven times a day in each direction. With its varied use, the centre will offer waiting travellers a connection to contemporary art.

"The [stop's] building is an island," says Marek Adamov, 24, director of Truc Sphérique, the non-governmental organisation (NGO) behind the project. He refers to the graffiti-covered highway interchange that forms a complete circle around the future art centre. "I like that, because the gallery is an island in the [cultural] mainstream too."

The centre, which is currently under construction, is designed as a kulturfabrik, an industrial space that is transformed into a cultural factory. In Slovakia, says Adamov, it is "perhaps just this station" that follows such a mixed-use design, and works as "a multimedia centre, or a multidisciplinary centre, and not just a gallery".

"So, the intention is not just to present art but also to work, to create, and to produce something," he explains.

On September 26 and 27 Truc Sphérique will open the centre with an event called A Way to the Station. The event is the largest that the organisation has ever prepared, and will include more than 50 young actors, performers, dancers, and musicians from 11 countries. A special train will bring visitors from the main Žilina station to the Open Cultural Space Stanica, on both days at 19:00. Guides will lead the travellers through the event in stages.

Despite the fact that the ground floor of the building will likely remain under construction until next year, and work will continue on the second floor for even longer, the list of functions that the centre plans to host is lengthy and ambitious. The centre will include an exposition area, an information, and new media centre, workshop space, a theatre, and a café.

In addition, the train ticket booth will continue to operate, and a portion of the building will be reserved for railroad employees. Truc Sphérique also plans to operate an artist residency program, children's program, and volunteer program, as well as art-therapy and community programs. It also promises that the building will be made available for use by other organisations.

The idea for the centre originated in 1998, soon after Adamov, and his high-school classmate Róbert Blaško, the NGO's project manager founded Truc Sphérique earlier that year. Adamov interned at a kulturfabrik in Luxembourg and visited others across Europe. Of the spaces he saw, none are still performing their original mission. Open Cultural Space Stanica, however, will continue to serve its public function, in addition to its new function as a site of cultural production.

Adamov says that this intersection is what excites him most about the station.

"Because it's still in use, we have a great opportunity. That's why I call this an 'open cultural space'; because as a station it's [also] a public space. You don't need to call people to come see the gallery, they come here to buy a ticket or because they have to wait for a train. They're one part of our future public [audience]."

"This is a meeting space," he adds, saying that passengers and gallery visitors will likely meet inadvertantly.

The railways provide the building to Truc Sphérique through a free-rent contract. In exchange, the NGO is bound to reconstruct the building, keep it in working order, and maintain the space for passengers. To save costs, Truc Sphérique is managing the building project themselves, directly contracting workers, and organizing volunteer labour. The project has numerous collaborators, and funding for the reconstruction is being provided by the EU as well as by Slovak foundations that support youth programs, and the contemporary arts.

Negotiating for the right to use the ŽSR building took four months and was a time-consuming, but not a difficult task.

He adds that he would like to schedule performances according to the trains "because then we'll reach the public of the entire Rajec valley". He also hopes to do the same with art pieces by putting them in trains and sending them to Rajec, "perhaps performances, or a kind of parade".

Since Truc Sphérique's initiative to reconstruct the building, in March 2002, there has been a strong reaction from the public. "Some were good, and some bad," says Adamov, adding that compared to a lukewarm and uninterested reaction to an earlier plan of the NGO to open a space in a state gallery, the strength of this reaction shows that the project is already having an impact on the public.

Adamov says he tries to cultivate such strong reactions. "I like to make events where there can be one very negative group that says that 'it is very, very bad and it is horrible', and they don't want to see it anymore. But, at the same time there is always a big group that says 'yes, yes, yes, this is what we want'."

Truc Sphérique hopes that their success will encourage others to develop their own projects, as well as cause sponsors to understand that the development of the cultural sector also involves them.

"At the same time, perhaps the public administration will also realise that it's not only the cultural institutions that they govern [that need support], but there are also independents who have a right to get some support," he adds.

The opening event, A Way to the Station, takes place on September 26 and 27, 2003, at the Open Cultural Space Stanica. On both days, a special train will leave from the main Žilina train station. On Saturday, there will also be a bus connecting to the southern Slovak town of Nitra, which is currently holding a theatre festival. Purchase tickets online at www.stanica.sk, or at the Andrej Bagar Theatre (DAB) in Nitra (Sk200, students Sk150, bus fair included).

The A Way to the Station project has been organised thanks to the European Cultural Foundation Amsterdam, the European Union Youth Programme, the Slovak Culture and Education Ministries, the Centre of Contemporary Art Foundation, Orange Slovakia, the Embassy of the Norway Kingdom in Vienna, the Czech Centre and the Polish Institute in Bratislava. Other main partners contributing to the station's reconstruction are the Proomont firm, and the Hueck firm.