FOLLOWING tradition, during the first evening of this year's Nitra Theatre festival, September 26, the winners of the Dosky Awards will be announced. Among the three men nominated for the best male actor award is Martin Huba, for his portrayal of the character of Krcheň, in Krcheň the Immortal.
"Huba is one of those who do theatre internationally," said Darina Kárová, the festival's director.
Krcheň the Immortal is one of 14 plays that will be performed during the festival by theatre ensembles from eight European countries. 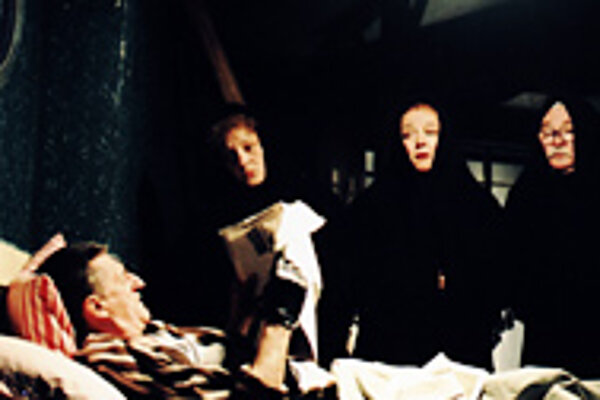 Font size:A-|A+0
FOLLOWING tradition, during the first evening of this year's Nitra Theatre festival, September 26, the winners of the Dosky Awards will be announced. Among the three men nominated for the best male actor award is Martin Huba, for his portrayal of the character of Krcheň, in Krcheň the Immortal.

"Huba is one of those who do theatre internationally," said Darina Kárová, the festival's director.

Krcheň the Immortal is one of 14 plays that will be performed during the festival by theatre ensembles from eight European countries. English-speaking visitors can ask for the play's text in English before the performance.

The aim of the festival is to offer a comparison between eastern and western European theatre. This year, the theme is even more significant from the viewpoint of the host country: Next May, Slovakia is supposed to join the European Union.

"The festival deals with the existence of an eastern identity and what place theatre has in the integrating Europe. Everybody discusses material things, but nobody talks about what impact a unified Europe will have on culture," Kárová said.

She adds that many of the European contemporary productions provoke questions dealing with the coping of one's past and facing the future of an open Europe. A fraction of them will be presented at the Nitra Theatre festival, whose 12th year is dominated by eastern and central European ensembles.

The event opens with two "full of fantasy" plays on Friday, September 26. The Czech Polárka Theatre from Brno brings two versions of Lewis Carroll's Alice in Wonderland, and the French Company Montalvo-Hervieu offers a dance performance to the traditional music from the Persian Gulf region.

A Hungarian production will present Alexander Pushkin's Boris Godunov: the theatrical debut of opera director Balázs Kovalik (September 27); and Hans Jahn's Medea: a play "without movement", directed by Sándor Zsótér (September 30). A Polish theatre troup will come with its version of Pushkin's Dead Princess on September 27.

A new country that the festival will present this year is Latvia. The New Riga Theatre will stage Nikolay Vasilievich Gogol's The Inspector General, on September 30. Nigel Charnock of the UK will close the festival with his solo performance Frank on October 1.

Out of the five Slovak plays, the play by Neil LaBute Bash: plays of recent days, on September 29, directed by Jan-Willem van den Bosch, stands out the most. The British dramatist, whose texts have made it to the screen, returned to cooperate with a Slovak team for the second time. His direction of Patrick Marber's Closer won several Slovak Dosky Awards last year. This year's play is nominated in three categories; best production, best direction, and best female actor.

"Slovakia premieres around 150 productions a year. The most often mentioned ones are comparable with the productions on export," says Zuzana Uličianska, the co-author of the Dosky Awards project.

THE SLOVAK Spectator talked to one of the nominees for Dosky 2003 Awards, acclaimed actor Martin Huba, about his leading role in Krcheň the Immortal (Krcheň Nesmrteľný). The play is the debut of Slovak scriptwriter Eva Maliti-Fraňová, and won the Drama 2001 contest.

The Slovak Spectator (TSS): What is the play about?

Martin Huba (MH): Krcheň Nesmrteľný is about a person who, in his way, influenced the lives of one village; he assigned a way of thinking, lying, and faithfulness. The play is a personification of all of the negative things that have surrounded us during the last decades. Krcheň is a slightly abstract character, who presents a palette of negative features and the reasons for their 'surviving'.

TSS: Have you identified with the character of Krcheň?

MH: Well, I think that this is a question for those who nominated [the actors for the Dosky Awards]. By knowing the results, I can see that somebody liked how I played it.

Obviously, an actor should find inside himself the certain moments with such a specific experience that he or she carries... I am the actor who uses personal experience. Because this play is a personification of the negative, I probably carry a lot of negativity in myself. Or in other worlds, I can say that I understood most of the negativity in the play and thus I let myself surrender to it.

TSS: Does the play reflect a Slovak mentality?

MH: Unfortunately, it does. From the spectrum of our characters, the play focuses on the bad ones.

I think that one can get rid of whatever negative features [he or she possesses] only after he or she admits to them. That's why I consider it to be relatively useful when [a play], instead of pretending that something like that does not exist here, gets tougher on those features that deserve condemnation. I think that a nation shows certain a maturity when it can look at its negative aspects.