Spreading around the good Roma name

APPROXIMATELY 200 Roma musical performers gathered on September 6, at the third annual Gypsy Music Festival, Ternipen, in the eastern corner of Slovakia, behind the old communist facades of the town of Snina.
Ternipen, meaning "youth" in Roma, is where Jarmila Kotlárová, director of the Roma NGO Ternipen, and the festival's organiser, puts all her efforts. She talks quite frankly about her work and the fact that she does not want to work with older Roma. 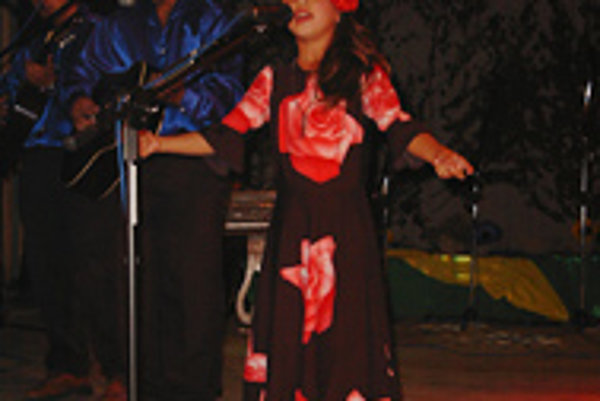 Font size:A-|A+
APPROXIMATELY 200 Roma musical performers gathered on September 6, at the third annual Gypsy Music Festival, Ternipen, in the eastern corner of Slovakia, behind the old communist facades of the town of Snina.

Ternipen, meaning "youth" in Roma, is where Jarmila Kotlárová, director of the Roma NGO Ternipen, and the festival's organiser, puts all her efforts. She talks quite frankly about her work and the fact that she does not want to work with older Roma.

"Children are the future," she said to The Slovak Spectator. "All efforts should be put into the children because that's where we can change and improve something."

She and her husband, Dušan Kotlár, who is one of the very few Roma policemen in Slovakia, have both worked hard to find talent in Roma settlements, and bring it to a stage and an audience. Kotlárová said that her own background is the reason why she feels so strongly about her work, in which she passionately and, if necessary, critically directs the performers.

"I grew up in a Roma settlement myself. I'm one of them and can relate to these people. This is why I do what I do," said Kotlárová, who directs performances with Roma temperament, energy, and enthusiasm.

At the gala evening, about 800 people gathered in the Culture House of Snina. Other than the amateur performers from settlements, there were professional participants, such as the Romathan Theatre from Košice, as well as other performers from the Czech Republic and Ukraine.

A theme of this year's festival had non-Roma performing with Roma. This was manifested by Kotlárová singing traditional Roma songs with a local teacher's choir.

"The festival has one big aim, and that is to connect people," she said. "I want non-Roma to get to know our culture, and learn to love it. Maybe then, they can like us Roma too. We want to build bridges and this is our first big chance - to communicate with song, dance, and music."

The gala evening started with a spectacular fire dance.

"Fire is strongly connected with us Roma, and this is why I wanted this at the beginning of the show," Kotlárová said. "We wanted to keep a fire going on stage all the time, and when it was not literally there, we wanted to keep the fire in peoples' hearts and minds."

From the Czech Republic, there were belly dancers, who performed a breathtaking dance to the sounds of hypnotic drums.

"I have always adored Gypsy music and dance," said Kateřina Kvapilová from the Prague-based dance troupe Tribaly. "But it's not a question of us trying or wanting to be Gypsy-women. Our dance is not authentic 'Gypsy-dance', but an Indian-Oriental dance where, in turn, Roma culture has its roots."

Indeed, during the festival one cannot fail to be amazed by the amount of the country's young Roma talent on stage. The star of the evening was 9-year-old singer Marek Horváth from the settlement of Bystrany. With unbelievable energy, his God-given voice left the audience spellbound.

"I'm very happy to be here and sing to so many people," he said enthusiastically, apparently enjoying the attention. His idols are pop stars Shakira and Michael Jackson.

Talking about the subject, Kotlárová pointed out that the older generation often fails their talented youngsters by encouraging them to imitate stars they see on television, instead of teaching the children to be themselves, and proud of it.

"Sometimes the older generations give a very bad example to our kids. For example, as in Bystrany, a settlement in the Spiš region, the Roma live in very poor conditions. As you may have noticed, I have to speak Roma to Marek since his Slovak is very weak. I'm trying to find a way for this boy."

Another young performer, 10-year-old Nikola Badžová from a settlement near Kežmarok, shows extraordinary promise. Kotlárová recalled how overjoyed she was when she found her and taught her how to use her voice. She said that because many of these young talents come from poor and socially disadvantaged conditions, it is often a challenge to make their parents understand waht potential they have.

"I know many talented Roma who have come a long way, but, unfortunately, the family is often a problem," Kotlárová said. "They neglect the kids' talent; they simply can't appreciate and develop it. First and foremost, they have to learn to value themselves, to know who they are and where they belong. Only then can they give that to their kids. As long as the parents don't set an example, we can't expect anything from the children."

Although Snina appears to be far off the map, the festival will continue to take place there, as the couple remains devoted to the town.

"Our town Snina is one of the very few towns in this republic that accepts my husband as a policeman. He has made a very good name for himself. He is also studying at the university and will finish next year," Kotlárová said.

"Maybe there are hidden problems, but during my 20 years here as a policeman, I haven't had any problems - neither with the majority nor with the minorities in Snina," said Kotlár. "I'm perceived as an equal partner within the police-corps."

Since only the Cultural Ministry finances the festival, moving the event to a larger city would make the finances much harder to raise.

"Unfortunately, in big cities, non-Roma don't care about Roma culture, and there are simply no people there to organise such events," Kotlárová said. "Also, I would need much more money to organise something like this in Bratislava, for example. We wouldn't get a penny out of sponsors there."

Both speak of the east as a place where Roma culture is very much alive. The town Snina seems to be a rare spot of tolerance: Slovaks, Ruthenians, and Roma coexist here without any major problems.

"The fact that we live together so well is because the Roma have made a good name for themselves here and the non-Roma have accepted them," said Kotlárová.

In her speech at the festival, though, she expressed her wishes to spread the "good Roma name" further than just Slovakia's east.

"We Roma are also entering the EU. Maybe we don't have very much to contribute, but one thing we do have is our rich and beautiful culture. We are offering something very beautiful and genuine, which has inspired many people throughout history. We are also offering something that many non-Roma don't have, and it's our sincere open hearts."