SIS and NBÚ at war

TWO CRUCIAL state institutions - the National Security Office (NBÚ) and the Slovak Intelligence Service (SIS) - are in conflict after the former said that SIS violated the law by providing several state officials, including PM Mikuláš Dzurinda, with sensitive information regarding NBÚ chief Ján Mojžiš.
The NBÚ, which carries out security screenings on officials and people who will access classified information when Slovakia joins NATO in May 2004, has always enjoyed the support of its foreign partners in the Alliance. 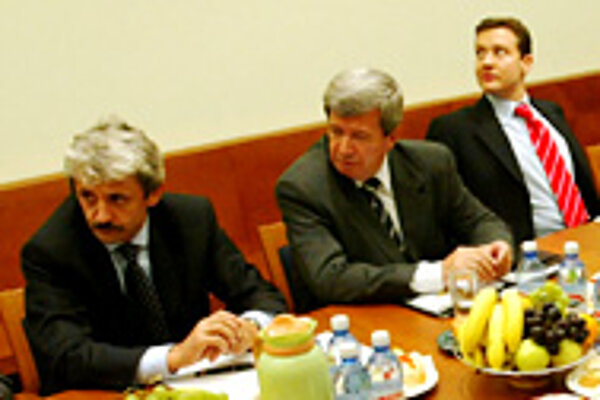 The NBÚ, which carries out security screenings on officials and people who will access classified information when Slovakia joins NATO in May 2004, has always enjoyed the support of its foreign partners in the Alliance.

The challenged SIS information, however, most likely led Dzurinda to announce recently that he had "completely lost trust" in Mojžiš and wants him out of the post. Dzurinda suggested that the NBÚ chief worked for unspecified political and economic interests.

Immediately after Juraj Puchý, head of the NBÚ office, accused SIS on September 23 of forwarding Dzurinda sensitive information out of Mojžiš's personal screening files, a special investigator started proceedings in the case.

SIS insisted, however, that it acted in line with its obligations, which include informing the PM of various security findings.

SIS spokesman Vladimír Šimko said that the intelligence service produced a report on Mojžis pointing to "certain security risks" related to the official, and sent it to the Attorney General and Dzurinda. However, Šimko would not specify what those security risks were.

Dzurinda failed to recall Mojžiš in a September 10 cabinet vote, in which two of his ruling partners refused to support the move, stating they were unconvinced by the PM's reasons for the reshuffle.

The ruling Hungarian Coalition Party (SMK) and the Christian Democrats (KDH) still hold to the position.

Both the KDH and the SMK say that the most recent allegations by the NBÚ need to be thoroughly investigated; if an investigation shows that the SIS acted in conflict with the law, Pittner could lose his job, and Dzurinda might face scrutinizing questioning from his ruling partners.

SMK head Béla Bugár said on Septmeber 23: "If it shows that the SIS director violated the law, he will have to leave."

Opposition parties have also expressed their concern over the latest development regarding Mojžiš, a suspected member of an unspecified group that PM Dzurinda labelled in late August as working against the interests of the state and his ruling SDKÚ.

Opposition politicians, meanwhile, are suggesting the cabinet should be reconstructed, something that they believe would best be done with PM Dzurinda ousted from his post.

The opposion Smer party chairman, Robert Fico, said that the reason for the reconstruction is that security information is "flying around [the country] like leaflets from a hypermarket".

But Pavol Minárik, head of the KDH parliamentary caucus, said to The Slovak Spectator that Smer's appeals hold little weight for the ruling coalition and insisted, "as long as cabinet reforms are passed in parliament, there is no reason to reconstruct the cabinet."

A security analyst with the Institute for Public Affairs think tank, Jozef Majchrák, said the recent events were proof that there has been long-term tension between the SIS and NBÚ.

"What is behind these tensions is pure speculation, but they may go back to the composition of the SIS and the fact that a number of people who were not granted security screenings by the NBÚ may be interested in having Mojžiš [kicked] out."

SIS was compromised by numerous critical stories in the British magazine Jane's Intelligence Digest, which stated that SIS was involved in illegal activities, including arms-trading, that it recruited active journalists, and that plenty of former communist secret agents (ŠtB) work in the SIS.

Former SIS chief Vladimír Mitro was fired in March this year and then indirectly accused Mojžiš of talking as a secret source to the magazine. Mojžiš denied those accusations.

SIS was also involved in an illegal wire-tapping scam surrounding the independent daily newspaper SME; SIS later described the case as a being a result of a "technical problem".

Analyst Majchrák believes that the SIS must undergo a thorough personnel clearance and get rid of its estimated 10 percent composition of former ŠtB agents to clear its name.

Majchrák also pointed out that the current situation had an influence on Slovakia's image abroad, particularly among Slovakia's future NATO partners.

"It is unlikely that Slovakia will be prevented from entering NATO, but it is definitely possible that it won't have equal access to classified NATO information," said Majchrák.

It is widely believed that Mojžiš will be recalled as soon as a suitable candidate is found. Dzurinda is considering Milan Ježovica, a diplomat who worked at the Slovak embassy in Washington, but the ruling partners refused to comment on the pick.

"Currently the NBÚ top post is not vacant, and until it is, I will not speculate on possible successors," Minárik said.

Analyst Majchrák said: "The replacement of Mojžiš is a political matter, but it is crucial that the person is trustworthy not just at home, but also for the NATO partners."