WITH THE international conference on EU's constitutional arrangements only days ahead, Slovak policymakers are trying to agree on what institutions and policies the future EU should have. Some critics say it is too little, too late.
Following pressure from the parliament, the government decided on September 16 to let the legislative body debate Slovakia's position on the draft constitutional treaty before finalising its strategy for the EU intergovernmental conference (IGC), which will start on October 4 in Italy. 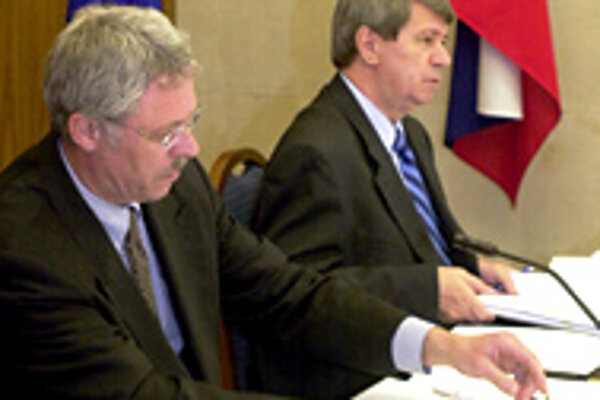 Font size:A-|A+
WITH THE international conference on EU's constitutional arrangements only days ahead, Slovak policymakers are trying to agree on what institutions and policies the future EU should have. Some critics say it is too little, too late.

Following pressure from the parliament, the government decided on September 16 to let the legislative body debate Slovakia's position on the draft constitutional treaty before finalising its strategy for the EU intergovernmental conference (IGC), which will start on October 4 in Italy.

The parliament ended its deliberations on September 23 and agreed with most of the suggestions put forward by the Foreign Ministry.

"The decision of the parliament is in line with what the government imagined," said Foreign Minister Eduard Kukan, according to news wire TASR.

Some critics say there has not been enough debate on the topic, and Slovak society should be more active in considering what lies ahead.

He added that perhaps Slovaks have not yet become used to the idea of being the subject, rather than just the object, of history.

Slovakia, the Czech Republic, Hungary, Poland, Latvia, Estonia, Lithuania, Slovenia, Cyprus, and Malta are set to join the Union in May of next year. Nine of these countries have already held successful national referenda which all confirmed EU entry. A popular vote will not take place in Cyprus.

The IGC participants will negotiate a draft constitutional treaty, a compromise document prepared by the European Convention, which completed its work on July 10. The Convention, headed by former French President Valéry Giscard d'Estaing, was made up of representatives of national governments and parliaments of member and candidate states, and representatives of the European Parliament and Commission.

The draft proposal put forward by the Convention has a non-binding nature and was intended to serve only as a basis for talks at the IGC, but several voices are saying most parts of the document should not be up for debate.

"The IGC should not reopen the compromise reached at the Convention. The IGC needs to improve and clarify a limited number of areas and complete unfinished work. It should avoid setting in stone the policy provisions of the Constitution," reads the Commission's opinion on the Constitution released on September 17.

Among those rejecting the idea of further talks on the new European legislation are large EU members such Germany and France. German Chancellor Gerhard Schröder said at a summit in Berlin of the leaders of Britain, France, and Germany that the

three agreed that "in general" the existing draft EU constitution must not be reopened during the IGC, according to Reuters.

European leaders claim it would be impossible for the 25 countries to reach an agreement on any of the issues if such a debate started. Schröder has said he hopes the IGC will end its work by the end of December.

Some Slovak politicians agree with this attitude towards the constitutional draft.

"We should definitely support the Franco-German position and form an alliance with these countries, so that in the future we will have strong allies that can actually help us push [some of our demands] through," said Vladimír Mečiar, head of the opposition Movement for a Democratic Slovakia (HZDS) in a debate on Slovak Television (STV).

The government, on the other hand, would like to see some of its ideas included in the new European legislation and is trying to find support in the ranks of some of the smaller countries.

Deputy Foreign Minister Ivan Korčok attended a meeting on September 23 of the so-called "like-minded countries", a group of 20 smaller EU members and future members, to negotiate their strategy for the IGC.

A separate meeting of representatives of Slovakia, Hungary, Poland, and the Czech Republic, is planned for October 1.

However, the government has made it clear that it will not put up too much of a fight at the IGC.

"The Convention did a lot of good work and under the current circumstances achieved the maximum. Putting forward too many demands and taking an uncompromising stand on them could pose a threat to positive developments," said Foreign Minister Kukan in his address to the Slovak parliament on September 17.

"The multilateral talks will be very tough. The Italian EU Presidency has asked countries to open only those questions at the IGC that have reached a pre-agreement consensus. That means that if some country comes with a proposal, it has to make sure everyone agrees," Kukan said.

In his speech in parliament, the foreign minister named specific goals he feels Slovak diplomacy should strive to achieve in the course of the negotiations.

The first priority is the composition of the European Commission, the chief executive body of the EU.

"The principle of two categories of Commission members proposed in the constitutional agreement is not grounded, and it fails to guarantee that the European Commission will continue to have a strong position," Kukan said.

The current draft Constitution says that the Commission will consist of a college comprised of its president, the union minister of foreign affairs, who will also serve as vice-president, and 13 commissioners selected on the basis of equal rotation between the member states.

The president should have powers to appoint non-voting commissioners from those member countries not represented in the college.

The Slovak foreign ministry, backed by the parliament's decision, disagrees and supports a one-country-one-commissioner policy.

The government has also proposed that the document should be called "the Constitutional Agreement of the European Union" instead of "the Constitution for Europe", as the draft is currently called.

"It better expresses the contractual nature of the document, the fact that it is the member countries that are establishing the EU," said Kukan.

The ministry also proposed that Christian values be mentioned in the legislation's preamble. The Convention's draft only talks about the "cultural, religious, and humanist inheritance of Europe".

The debate on whether to include references to God in the preamble, which has been going on for months in Slovakia, gained new momentum after the recent visit of the Pope, who while in Slovakia said Christianity must be mentioned in the constitutional document.

"If Europe decides to turn away from its Christian roots, it will be like cutting the roots of an apple tree. That tree will dry out in a couple of weeks," cardinal Ján Chryzostom Korec said for STV.

The parliament's position on this issue seems to reflect a certain lack of consistency in Slovakia's policy on EU issues. In February, the parliament agreed that a reference to God should be made in the constitutional treaty.

Now, legislators had decided the government should rather focus its energy on issues other than the preamble, which is not legally binding.

The third area the foreign ministry feels Slovakia should focus on is a just rotation in the ministerial councils.

"The current wording is not specific enough, and we will thus ask for it to be clarified," said Kukan.

The draft stipulates that the presidency of the various Council of Ministers formations is to be "held by member states' representatives ... on the basis of equal rotation for periods of at least a year". It leaves it up to the European Council, a body comprised of heads of EU states, to adopt a decision establishing the rules of such rotation.

Finally, the Slovak administration wants to preserve unanimous voting in some key areas such as taxes, social affairs, or the protection of economic and social cohesion, in order to make sure the voice of small states will have to be heard.

The Italian EU Presidency, which will be hosting the conference, has also defined a set of questions that it feels need to be discussed at the conference. Among them are the rotation of the Council Presidency, the role of the Union Minister of Foreign Affairs, and a common defence policy.