To kiss or not to kiss?

HE WANTS to kiss her, but she won't kiss him. After a ceratin amount of time, she wants to kiss him, but he won't kiss her. Finally, they kiss each other. Everybody's happy. Now imagine that this elementary intrigue is the main, and only theme of a two-hour opera. Can you?
Czech librettist Eliška Krásnohorská, and composer Bedřich Smetana could imagine. 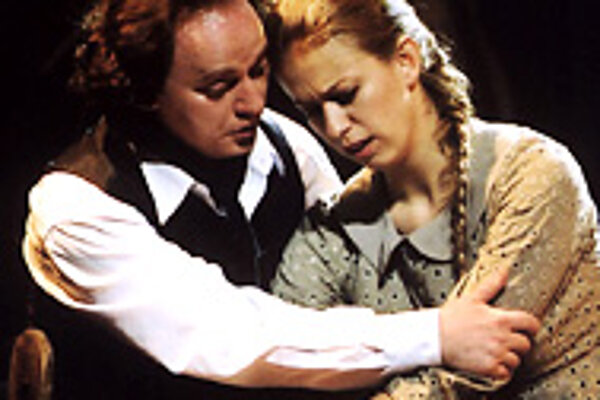 HE WANTS to kiss her, but she won't kiss him. After a ceratin amount of time, she wants to kiss him, but he won't kiss her. Finally, they kiss each other. Everybody's happy. Now imagine that this elementary intrigue is the main, and only theme of a two-hour opera. Can you?

Czech librettist Eliška Krásnohorská, and composer Bedřich Smetana could imagine. Basing their work on a story written by Karolína Světlá, they created the charming, though naive, folk opera The Kiss; a sort of pop entertainment piece from the end of the 19th century. The crew of the Slovak National Theatre (SND), which, on May 31, premiered the 12th version of the opera since its 1920 composition, did even more; they transformed the comic work into a gloomy, dramatic, almost hellish show.

But was it worth reviving the opera, based on an outdated subject, with such a daring experiment?

After the death of his wife, Lukáš is left alone with his small child. His brother-in-law Tomeš brings him to Vendulka, the girl Lukáš was in love with before he was married. Vendulka still loves Lukáš, but the moment he wants to kiss her, she firmly asks him to wait util they are married. Lukáš leaves, furious. He comes back with a group of girls and kisses them in front of Vendulka. She is hurt, and hides herself in a forest. Lukáš asks his friends to help him find her. Now, it is Vendulka who is ready to kiss Lukáš, but he is not - he feels guilty for humiliating her, and no longer feels worthy of her love. Finally the two kiss.

This is a story, for which Smetana composed a handful of beautiful melodies, based on Czech folk motifs and rhythms. The arias sung by Vendulka are profoundly lyrical, reflecting the sorrowful spirit of female folk songs. The arias sung by Lukáš are energetic, dynamic, and reminiscent of such folk dances as the polka and the furiant (a very fast, sharply rhythmical Czech dance).

The ensembles of the main characters and mass episodes carry the imprint of the Smetana's musical genius: They are psychologically precise and masterfully integrated into the main dramaturgical line.

The music of the opera, in spite of some dramatic pages, remains light, lyrical, optimistic, and memorable. That's probably why it was a smashing success during the opera's premiere in Prague, in 1876. And that's also probably why its music sounds so fresh in our time, in spite of the fact that Smetana himself did not believe in the long life of this piece.

The musical interpretation of the SND's new production of The Kiss shows the full potential of its singers, the choir, and its orchestra. Klaudia Dernerová (Vendulka), Jozef Kundlák (Lukáš), Pavol Remenár (Tomeš), and Martina Masaryková (Barča) demonstrated their vocal capabilities during the May 31 premiere, and were rewarded by the enthusiastic applause of the audience.

The lyrical soprano of Dernerová has all the ideal qualities: flexibility, strength, and brightness - to reveal the complex psychological portrait of Vendulka. Masaryková sparkled in her only aria, with a virtuoso performance. Kundlák and Remenár performed their male duets especially well. Only, sometimes one got the impression that the orchestra and the soloists had two different ideas about the rhythmical aspects of the performance. All the main soloists, except for Masaryková, lagged slightly behind the orchestra. In contrast, the choir, led by Naďa Raková, dissolved perfectly well with the orchestra, sounding very harmonious.

Contrary to the lively music, the stage setting, as well as the costumes, designed for The Kiss, were strikingly dull. The light, energetic, and generally optimistic music markedly collided with the dark, pessimistic colours and visual forms that dominated the stage. To begin with, the first images that appeared on the screen, during the overture, of wooden houses on fire, are gloomy, and rather scary.

Stage director Pavol Smolík, and stage designer Milan Ferenčík, concentrated on the dark side of the production, using all possible means to achieve the look throughout the whole opera. A burnt spinning-wheel, an unscripted figure of Lukáš's dead wife silently appeared a few times, black and grey set decorations were all as if borrowed from a horror movie.

Costume designer Ľudmila Várossová, who usually dresses artists in beautiful, elegant, colourful outfits, did not lag behind. She created especially inexpressive, depressingly dull costumes, which did not belong to any discernable historical period.

Before the premiere, at a press conference, the performance's stage director Smolík said that the new production's aim is to freshen up the historical piece for today's audience. If "freshening" means horrifying, then was it really worth reviving an opera that has already been staged at the theatre 214 times during the last 80 years, in 11 different versions?