EIGHT months after the post became vacant, members of a national judicial authority, the Judicial Council (SR), elected judge Milan Karabín as the new president of the Supreme Court in a secret ballot.
Criminal law judge Karabín, 54, elected on September 30 to lead the court for the next five years, won 10 out of 18 votes, the smallest margin needed to qualify for the position. 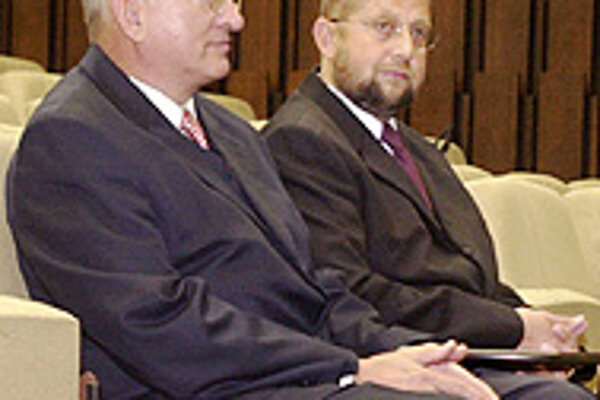 Font size:A-|A+
EIGHT months after the post became vacant, members of a national judicial authority, the Judicial Council (SR), elected judge Milan Karabín as the new president of the Supreme Court in a secret ballot.

Criminal law judge Karabín, 54, elected on September 30 to lead the court for the next five years, won 10 out of 18 votes, the smallest margin needed to qualify for the position.

Karabín briefly led the top court six years ago, though he resigned from the position at the end of 1997 over what had then been officially dubbed as health concerns.

Assumptions that he gave up the post due to pressure from the political elite surrounding then PM Vladimír Mečiar have never been proven.

Karabín promises to end a "war" at the Supreme Court in which two informal groups of the court's judges were in conflict. Each of them supported one of Karabín's competitors in the race - the former head of the top court, Štefan Harabín, and the vice president of the court, Juraj Majchrák, who temporarily led the court after Harabín's term endid.

Majchrák gave up his candidacy shortly before the formal procedure of electing the new chairman began. The move enabled Majchrák, a member of the Judicial Council, to take part in the vote and thus effectively help Karabín obtain the post.

"With two clearly antagonistic candidates in the election - Harabín and Majchrák - I wanted to enable the Judicial Council to look at a third option," Majchrák said after the results of the vote were officially announced.

SR member Peter Brňák said to The Slovak Spectator on October 1 that he was convinced Karabín had the necessary qualities to lead the Supreme Court, although he admitted that the SR's pick was a matter of compromise.

"SR realised that the present situation of the judiciary [having no official top judge] is a serious one and therefore went for a compromise. I think that Mr Karabín has shown in the past that he can fulfil the tasks related to this position, and the visions that he presented to SR members seem realistic and on the right track," Brňák said.

In his 30-minute speech prior to the SR vote, Karabín said his highest values during the 30 years he worked as a judge were "what is right and just", and that the law has always been in the forefront of his decision-making.

Karabín wants to contribute to creating an environment for judges that would enable them "to decide truly independently, justly, and in line with the law". He also said it was especially important that politics and economic interests do not reflect or have any impact on judicial decision making.

"Judicial power should be independent and apolitical," Karabín said.

Karabín is known as an uncompromising criminal judge reputed for his severe rulings against organised crime members.

Both Harabín and Karabín ran for the post in May this year, but neither of them managed to win the necessary number of votes. The September 30 elections were the fourth since Harabín left the post.

Harabín, a controversial judge who stood in open opposition to the former and current justice ministers over their differing views on judicial independence, won a surprising five votes, despite having seemed to be the candidate with the biggest chance to regain the seat.

Shortly after the results were announced, Harabín said he respected the results. He insisted, however, that his loss was a result of what he said was an extensive campaign against him by his opponents.

Harabín was re-elected to lead the top court in December last year, but the vote's legality was attacked, and the Constitutional Court, a national judicial authority for resolving constitutional disputes, ruled the election null and void.

When in office between 1998 and 2003, Harabín was criticised for his reluctance to introduce an electronic system for distributing judicial agenda that at other courts was seen as an effective tool to avoid possible corruption when assigning judges to take over certain cases.

He was also compromised when it turned out that he had approved high bonuses for Supreme Court judges who were widely seen as his supporters.

Karabín said he would introduce an electronic management system to his court and that he wanted to make sure that his court is "truly supreme rather than simply the biggest [court] in the country", referring to the relatively large number of judges in the institution.

Currently there are 80 judges at the Supreme Court, and it is expected that Karabín will cut down the staff and reorganise the judicial agenda so that it can be handled with fewer judges.

Justice Minister Daniel Lipšic welcomed the election of Karabín. He said that he believes that with the new chairman, the Supreme Court will become more involved in "conceptual issues related to the judiciary".

"We may not agree on all issues - the new chairman of the court is a representative of the judiciary, while I represent the executive power. But it is crucial that we have good and decent communication," Lipšic said.

President Rudolf Schuster has yet to officially name the new top judge, but it is believed that he will approve Karabín's election within days.