SLOVAKIA may have a new tax system with a flat tax rate at 19 percent for income and value added tax (VAT), in effect in January 2004.
The tax reform, tailored by the Finance Ministry, has the ambition of creating a business and investment friendly environment and eliminating existing weaknesses and deformations in the tax laws.
"[The] proposed tax reform is directed towards the creation of a fair, simple and investment-oriented tax environment in the Slovak Republic", said Finance Minister Ivan Mikloš for The Slovak Spectator. 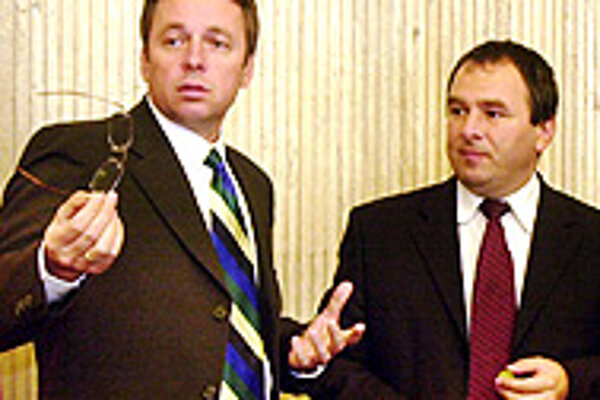 Font size:A-|A+
SLOVAKIA may have a new tax system with a flat tax rate at 19 percent for income and value added tax (VAT), in effect in January 2004.

The tax reform, tailored by the Finance Ministry, has the ambition of creating a business and investment friendly environment and eliminating existing weaknesses and deformations in the tax laws.

"[The] proposed tax reform is directed towards the creation of a fair, simple and investment-oriented tax environment in the Slovak Republic", said Finance Minister Ivan Mikloš for The Slovak Spectator.

The tax reform bill, which is currently under Parliamentary committee review, includes an introduction of a flat rate for the incomes of all entities. All individuals, legal entities, and foreign individuals will be taxed at the flat rate of 19 percent.

For corporations this means a lower income tax compared to the current rate of 25 percent. Individuals, nowadays taxed progressively within the range of 10 - 38 percent (the percentage increases with higher incomes), will all pay the same tax rate.

Two current rates of VAT, a reduced one at 14 percent and a standard one at 20 percent, will be unified from the beginning of next year at 19 percent.

Flat VAT will be imposed on the group of goods and services taxed today at the lower VAT level, such as basic foods, medicine, energy, construction works, books, newspapers, magazines, and hotel and restaurant services, which will be noticed in wallets through higher prices.

To be in effect from May 2004, it has also been proposed that the threshold for registration of VAT-payers be decreased from the current Sk3 million (€72,390) to Sk 1.5 million (€36,195) of annual turnover to meet EU requirements.

The Finance Ministry hopes that such a vast reform will spur further economic growth and attract more investments, even though the tax reform has ruled out direct tax incentives for investors.

"Tax reform, and tax rates at the lowest possible level for everyone is an important motivation to attract investors. It is a strong and positive signal for the inflow of foreign investments," emphasized Mikloš.

Peter Papanek, the spokesman for the finance minister, said that direct tax incentives are mostly qualified by the European Union as unallowable state assistance.

"There is no point in choosing tax incentives when Slovakia is trying to enter the European Union. We do not want to favour individual investors.

"Flat tax, the abolishment of taxation on dividends, and profit shares that are included in the tax reform is the correct way of supporting those who want to invest. This is a fair, horizontal aid from the state that sets the same conditions for everyone," explained Papanek.

According to the Finance Ministry, the flat tax or a tax similar to this one has been introduced in 33 countries. GDP growth in these countries is two times higher than in others. Unified tax has been effective, for example in New Zealand and Estonia, as well as Hong Kong, an economy with some of the most dynamic economic growth in world.

Apart from changes in income taxes and VAT, the reform proposes to abolish gift tax and inheritance tax by the end of 2003 and to introduce a flat 3-percent real estate transfer tax in 2004 with a chance to abolish it later on. "Those taxes represented multiple taxation of property that was already taxed once," added Papanek.

The Finance Ministry disagrees with the opinion that the proposed tax reform will endanger public finance due to the lower income tax rate and consequently insufficient state incomes.

According to the Finance Ministry, thorough attention was paid to the fiscal impact of tax changes, with special regard to the fulfilment of Maastricht criteria for the adoption of the euro, which stipulates that budget deficits must not exceed 3 percent of GDP by 2006.

Papanek explained: "Even after significant changes, the impact will be neutral. Only the approach will be changed - because of lowering income tax rates, the stress will be moved to state incomes on indirect taxes [VAT, consumer taxes]".

The Finance Ministry said that so far the tax reform has been well accepted by the foreign business society. Slovak tax reform was also praised by the Organisation for Economic Cooperation and Development (OECD). General secretary of OECD Donald Johnston said: "This reform is very important and OECD will monitor its development very closely".

Johnston espacially highlighted the simplification of the tax system, changes in the VAT, as well as the unification of the taxation of businessmen and citizens, which make the reform attractive for foreign investors. However, he stressed that tax reform never ends, and each of the thirty OECD member countries is still searching for an effective system that would enable further economic development.