Fresh and young at 55

IT HAS been 55 years since the Lúčnica dancers carried their one-costume style to performances in their suitcases. Today, the ensemble has around 3,000 costumes, and those travelling to performances are kept in a special trailer attached behind the bus that carries the performers.
"I don't know if those who initially laid the basis for Lúčnica believed that the ensemble would live to such a beautiful age," said Pavol Čorej, Lúčnica's current director. 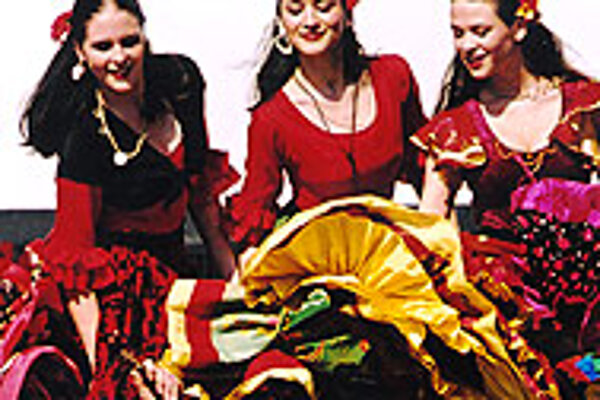 Font size:A-|A+
IT HAS been 55 years since the Lúčnica dancers carried their one-costume style to performances in their suitcases. Today, the ensemble has around 3,000 costumes, and those travelling to performances are kept in a special trailer attached behind the bus that carries the performers.

"I don't know if those who initially laid the basis for Lúčnica believed that the ensemble would live to such a beautiful age," said Pavol Čorej, Lúčnica's current director.

During its 55 years, the folk dance and music ensemble Lúčnica has become the leading representative of Slovak folk culture at home, as well as abroad. Holding up to 100 performances a year, the ensemble has visited 60 countries on five continents, and has enjoyed large success almost everywhere.

To celebrate the 55th anniversary of its establishment, Lúčnica has prepared a two-hour programme compiled of the best dance and music shows from its repertoire and a concert by Lúčnica's choir, interpreting the best works from various choir genres. Lúčnica will present the programme in Bratislava on October 9, 10, and 11.

"It's a selection of the shows that have always lifted viewers from their seats," said Július Jackuliak, Lúčnica's manager.

The dance group and orchestra's programme consists of 15 individual performances that offer a tour throughout the different regions of the country, demonstrating their dances, customs, and costumes.

It begins and closes with representative performances choreographed by the company's life-long artistic director, Štefan Nosáľ, with music written by the legendary composer Svetozár Stračina, who has worked with Lúčnica for over 30 years. The Šarišská polka, a dynamic dance from the Šariš region in eastern Slovakia, will open the programme, while Sviatok na Zemplíne (Celebration in the Zemplín Region), one of the earliest performances created by Nosáľ and Stračina, will close it.

Among other performances are the male dances such as Palicový, an intertwining dance with sticks; Po valasky odzeme, a vigorous hop-dance with deep knee-bending and high jumping; and Širákový, a fast hat-passing dance. Girls will illustrate the process of spinning in the V kúdelnej izbe performance, and will celebrate spring in the Vitaj Jar.

According to Jackuliak, the dancers of Lúčnica, who usually perform to a six-member folk band called the Devil Violin, will dance this time to the music of a 36-member orchestra.

"This is the first time after 15 years that so many of Lúčnica's musicians are back together, and maybe the last," Jackuliak said. Lúčnica's home orchestra, the Devil Violin, will hold three individual musical entries with a dulcimer solo by Ernest Šárkozi, one of the world's best players.

Lúčnica, which originated in 1948 by joining two already existing amateur groups, Živena and Odzemkári, became successful thanks to the richness and diversity of the country's folk art it presents. Since March 1950, the ensemble has been performing under the name of Lúčnica, a new term made up by the ensemble's founding members that evokes the "beauty of a flowery summer meadow, the youth and beauty of a female dancer".

"The beginnings of Lúčnica didn't suggest at all that the group of enthusiasts would one day become an artistic company similar in significance to the professional SĽUK (the Slovak Folk Artistic Collective), the Slovak Philharmonic, or even the Slovak National Theatre. Without exaggeration I can say that today Lúčnica is one of these top artistic companies that so excellently represent our art abroad," Lúčnica's director, Čorej, said at the occasion of Lúčnica's 50th anniversary.

Lúčnica started its career with simple arrangements of dances from Slovakia's central regions of Horehronie and Liptov. With new members coming to the ensemble from all around the country and importing traditions from other regions, the repertoire gradually enlarged. The simple folk dances received scenic forms, and individual pieces were combined into ten, single-theme feature programmes, such as Welcome Our Spring, Game and Work, Wedding, This is Lúčnica, and The Carpathians.

The three decades that followed the 1960s are considered the golden age of Lúčnica. During that period, the choreographic-compositional tandem of Nosáľ and Stračina created the core of the ensemble's repertoire.

Between 1966 and 1968, internal changes in Lúčnica divided the ensemble into a dance group with an orchestra, and a choir, whose repertoire ranges from classical and sacral works to arrangements of Slovak folk songs, some of which have enabled the group to win several competitions around the world.

One of Lúčnica's first conductors, Juraj Kubica, managed to build up a stable basis of a 40-member orchestra. The number, though, gradually decreased due to economic pressure, until it settled at 27 musicians. Conductor Miroslav Šmíd, who came to Lúčnica in 1953, led the orchestra until it was forced to change into a folk band in 1988. Since 1995, Lúčnica's performers have been dancing to music by Devil Violin, initially fronted by Martin Sleziak, but currently by Ján Berky Mrenica, Jr.

Lúčnica, which has often been the first representative of Slovak culture abroad, started touring the world since the very beginning. The longest tour in the ensemble's history was in 1956, when it travelled South America for half a year. The tour was the first exposure South Americans had to Slovak culture.

Like in its home country, viewers abroad admire Lúčnica for its scenic arrangements of traditional Slovak motifs.

"Lúčnica is the kind of artistic ensemble whose art is enthusiastically accepted by its own nation, just as it is by foreigners from all the sixty countries around the world where Lúčnica has toured," said Štefan Nosáľ, the group's life-long artistic director and choreographer. He entered the ensemble as a dancer in 1949, and since 1953 he has choreographed around 100 pieces for the group.

The New York Times described Lúčnica, which performed in New York in November of 1994, as "the absolute number one. Its young dancers spark with excellent technique in an overwhelming repertoire that truly grasps its surprisingly varied sources".

During its 55-year existence, Lúčnica has seen around 2,300 dancers, musicians, singers, and managers who have formed the ensemble. Thanks to the constant changing of its members, the group's performances are presented with enthusiasm and, as most of the male viewers say, the "beauty of Lúčnica's female-dancers"; Lúčnica has been given the attribute "always young".

"The group constantly rejuvenates; every time it is needed, we hold a competition for new members," said Jackuliak, adding that the most recent competition took place on September 29 and 30.

Currently, Lúčnica has about 50 dancers. The youngest one is 15 years old and the oldest 27. On average, the dancers stay in Lúčnica for four to six years, usually until their university studies end. In the past, though, it was different. Then dancers, like 67-year old Viliam Gruska, who danced in Lúčnica for 16 years, had often stayed for over a decade.

"For me Lúčnica was an amazing world of direct dealing, incredible democratic production manners, and social behaviour," said Gruska, recalling the communistic 1950s, during which he entered Lúčnica as a university student, and during which such principles were suppressed.

"[Lúčnica] enabled us to have contact with [other art] abroad. Back then, few [Slovak groups] could travel the world... Lúčnica was one of them. Looking at life there was different from [looking at] the one we had at home. Lúčnica was a starting point for many of my activities and work, as it was in the case of other Lúčnica performers," he said.

Gruska stayed in Lúčnica ten more years after he graduated, while working as an architectonic set designer for TV programmes, in which he tried to apply traditional motifs. The other four members of his immediate family, his wife, two daughters, and son, performed in Lúčnica as well.

"Our family had been dancing there for 35 years."