THE RULING coalition is experiencing the most turbulent period since the Dzurinda team formed the cabinet in the fall of 2002.
After opposition Smer boss Robert Fico declared that Mikuláš Dzurinda is no longer capable of leading the country, the Confederation of Trade Unions (KOZ) started preparing a petition for early elections. 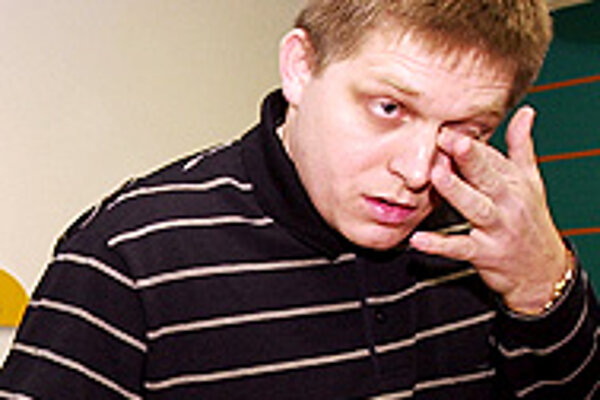 Font size:A-|A+
THE RULING coalition is experiencing the most turbulent period since the Dzurinda team formed the cabinet in the fall of 2002.

After opposition Smer boss Robert Fico declared that Mikuláš Dzurinda is no longer capable of leading the country, the Confederation of Trade Unions (KOZ) started preparing a petition for early elections.

The KOZ's plans have taken the political arena by surprise. Recent unionist protests have been considered toothless efforts to get the government's attention.

Fico's Smer is likely to support the unions.

The Movement for a Democratic Slovakia (HZDS) has turned rather diplomatic and claimed it will in no way tell its sympathizers and members not to sign the petition, nor to ignore the eventual referendum on early elections.

However, spokesman for the HZDS Igor Žvach said that an unambiguous support depends on further negotiations.

The ruling coalition objects to the plans on the grounds that the unions are trying to substitute themselves for the political parties. KOZ boss Ivan Saktor said that the initiative is a response to the cabinet's reluctance to accept the social demands of the unions.

Saktor rejected claims that the KOZ is trying to profit from the strain on the cabinet caused by complications around the recall of the head of the National Security Office, Ján Mojžiš, and Defence Minister Ivan Šimko.

Originally, the unions had planned a one-day strike, but they changed their minds after nobody attributed significance to their recent one-hour strike.

The trade unions' requests include raising the minimum wage, changes to tax and pension reform, and assurance that a collective agreement in the public service sector will be signed for 2004.

Political scientist Ľuboš Kubín told the daily SME that the KOZ plans have only a feeble chance to succeed.

"The unions might collect the necessary number of signatures [for making the president announce the referendum], but it is unlikely that enough voters would attend the referendum," he explained.

The Smer leader has already initiated a meeting of opposition parties to discuss the recall of Dzurinda.

"Smer finds it unacceptable to have a person who dared to intervene in the management of such an important institution as the National Security Office (NBÚ) lead the country," Fico told news wire SITA.

He was referring to recent statements by the ex-director of the country's vetting authority, Mojžiš, who, after being sacked by the cabinet on October 2, claimed that Dzurinda was trying to persuade him to change the NBÚ decision to deny security clearance to the firm KISS. As a result of the decision, the firm lost an Sk800 million (€1.9 million) tender for the state information system Govnet. (See Pandora's Box opens on page 3)

"Under normal conditions, any prime minister would resign upon such accusations. But Dzurinda will not leave, he has to be sacked," Fico claims.

Prior to parliamentary elections in 2002, Fico made no secret of his ambitions to become the country's next prime minister. Observers often attributed his fundamentally acid opposition to the Dzurinda team to his bitterness over the dissolved ambitions.

According to Fico, Dzurinda's rule has been and will always be about business; he will always erase those who stand in the way of the interests of the lobby backing his party, the Slovak Democratic and Christian Union (SDKÚ).

Fico also hopes that opposition parties can gain even more positions due to recent changes within the Dzurinda team.

As three deputies have left the deputy faction of the New Citizen's Alliance (ANO), the ruling coalition has lost its majority in parliament.

The Smer boss claims that a ruling coalition that has only a narrow majority in parliament should not hold the posts of parliamentary speaker and three deputy speakers.

HZDS mouth Žvach said that the movement is open to negotiations with Fico. However, Fico's plans only copy what the HZDS has been trying to do for a long time, Žvach claims.

The Communists (KSS) are also likely to attend Fico's meeting, while the HZDS renegade grouping under the Ľudová Únia name has not taken a stand yet.

In its latest poll, the Slovak Radio's Media Research Department suggests that 40 percent of respondents are supportive of the idea of early elections, while the rest consider them needless.

A referendum on early elections that the HZDS managed to organize in 2000 turned void after only 20 percent of the voters attended the plebiscite. The majority of the nation must cast their ballots to make a referendum valid.