THE FULL liberalisation of telecommunications, with unlimited access to the fixed phone line market for alternative operators, may take place in Slovakia next year.
Conditions for a liberal telecom market have formally existed since January 1, 2003. However, they are still far from being fully applied in practice, though the cabinet declared the move is one of its priorities. 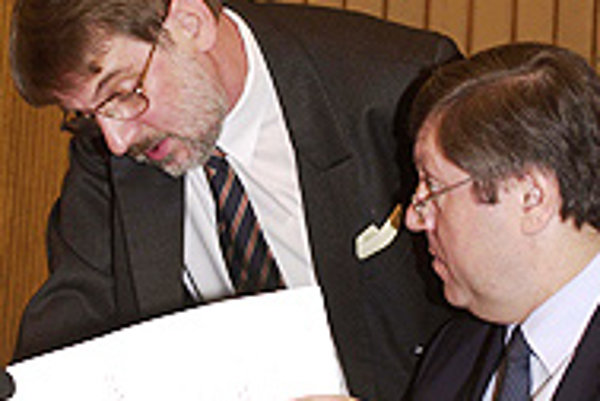 Font size:A-|A+
THE FULL liberalisation of telecommunications, with unlimited access to the fixed phone line market for alternative operators, may take place in Slovakia next year.

Conditions for a liberal telecom market have formally existed since January 1, 2003. However, they are still far from being fully applied in practice, though the cabinet declared the move is one of its priorities.

"Liberalisation [of the telecom market] is the key towards creating an information society," said the state secretary of the Ministry of Transportation, Telecom, and Postal Services, Mikuláš Kačeliak.

"Telecommunications are the engine for the development of our whole society and are the basis for further structural changes," he added.

Insiders say that in order to make the liberalisation work, the involved bodies must change their overall attitude.

Liberalising fixed-lines voice service, calls made through fixed lines in households and companies, is the final stage of creating a free telecom market.

From the beginning of this year, theoretically everyone should have the option to sign up with any licensed telecommunications carrier for fixed-line voice service, not only the former state monopoly, Slovenské telekomunikácie (ST).

The telecommunication network, however, remains in the hands of the still dominant ST, and the liberalisation of the telecom market in practice lags behind the legislation.

In order to make the liberalisation of voice services real, alternative operators will need to have their networks hooked to the ST network. The interconnection will enable clients of different networks to make phone calls through fixed lines.

At the same time, this interconnection is a basic condition for providing the public with a free choice of operator. Alternative operators do not have the means to create their own full fixed-line network, due to the enormous costs of such projects and because they are very time consuming.

Moreover, there is an already functioning network built by ST. Still, any alternative carrier needs to have developed at least a small local network if it wants to provide such services.

So far, the Slovak telecom regulation body, Telekomunikačný úrad (Telecommunications Office), has granted operation licenses to 17 carriers to provide fixed-line voice service. But ST has not signed any contracts with other companies for network interconnection.

"The [contract] offer from the national operator is not acceptable on basic points and it has a discriminating character," said Juraj Taptič, CEO of eTel - one of the alternative carriers, at the occasion of a telecommunications conference in Bratislava.

ST, however, presents the offer as a draft of a possible contract on interconnection where a mutual convenience [between ST and an alternative operator] is negotiable and reachable. The telecom company officially declares that it creates non-discriminating and transparent conditions for all those who are interested in network interconnection.

"The history of returns from fixed-line voice service, the decreasing penetration of fixed lines, and the high level of fixed costs, which are typical for the telecom sector, show that it is difficult to build a model that would be convenient for ST, the Telecommunications Office, and other carriers," added the president of ST, Miroslav Majoroš.

According to European legislation, any telecom company with a significant market share has an obligation to rent such a network to its competitors for prices based on costs and adequate profit.

This obligation should have been injected into the amendment to the Slovak telecom act approved by the parliament in 2002, but it was held back.

President Rudolf Schuster refused to sign the amendment and sent it back to parliament, where it failed to pass a second time. Allegedly, he acted upon lobby moves.

A new electronic communications bill passed by the cabinet in September 2003 could change the current situation. The bill should be discussed in parliament in November of this year and is expected to take effect in early 2004, excluding some exceptions that will take effect after entrance into the EU.

The main goal of the new bill is to insert EU regulations into Slovak legislation and to eliminate the shortcomings of the current legislation.

A reference offer is a skeleton contract embedded in the law that must be used for contracts within the field it regulates. In the case of interconnection, the telecom carrier who holds the significant market share must use it when it works out its contracts. The responsible telecom regulation authority, in Slovakia the Telecommunications Office, has an obligation to evaluate each final contract for adherence to the reference offers and, if it is acceptable, publish it.

Every carrier then knows the basic contract items. Alternative carriers can negotiate different conditions, but some of them, like the basic business model, basic prices, etc., are commonly stipulated by the reference offers.

The chairman of the Slovak association of alternative carriers (ATO), Vladimír Ondrovič emphasized the importance of reference offers, saying to the news wire SITA that "it is important to speed up the reference offer process so that it will be possible to carry out the unbundling and renting as soon as possible."

The new bill will omit any requirements for companies that want to establish networks and provide services. The bill newly defines economic competition in telecommunications.

It also more precisely describes price regulation terms and tariffs for public electronic communication services, as well as terms for individual permits for the use of public frequencies and numbers.

The bill also enlarges the scope and strengthens the position and financing of the market regulating body, the Telecommunication Office. It is to be active in talks between different carriers in the case of conflicts regarding interconnection contracts.

Some of the representatives of alternative carriers, however, still do not consider the Telecommunications Office, as it is defined in the new bill, strong and independent enough to be prepared to negotiate with ST.

"Again, it will be an office of the state administration dependant on the state budget.

"Signing interconnection contracts probably will not be possible without a strong and responsible Telecommunications Office," added Taptič from eTel.

Although the new bill that is to replace the old telecommunication act has its shortcomings, the carriers say that it is high time to adopt such legislation. One of the risks is the approval process the bill still has to undergo in parliament, which is overshadowed by the strong telecommunications lobby.

"The risk is the amendment of proposals in favour of the lobbying groups", said Ondrovič from ATO.