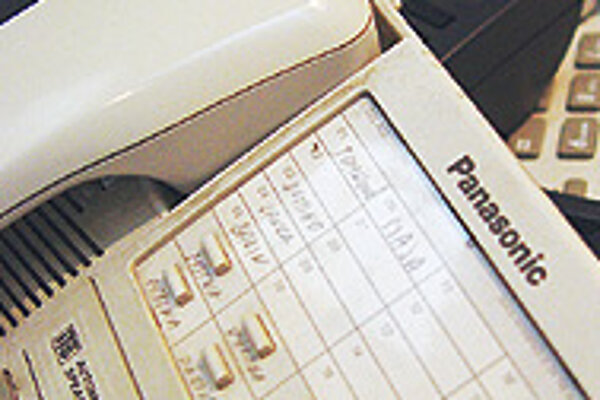 Font size:A-|A+
SLOVENSKÉ telekomunikácie, the former state monopoly in telecommunications, will not escape the drop of its market share once the telecom market is fully liberalised.

The drop will be obvious, as Slovenské telekomunikácie (ST) was the sole provider of telecommunications services in Slovakia for a very long time.

The unlimited access of other carriers to fixed-line based voice services, which has been declared the last step in the liberalisation process of the Slovak telecom market, came into effect this year.

"As we can see from the experience of other countries, ST will not avoid a mild decrease of the market share. On the other hand, there are possibilities of increasing revenues from wholesale activities and from providing solutions for customers as a result of sharpening competition," ST chief strategy and regulatory officer Pavol Kukura told The Slovak Spectator.

According to Kukura, alternative carriers who are interested in providing fixed-line voice services will probably continue in their concentration on corporate clients.

Competition already exists in the corporate client market. ST, however, points out that the competition is still based on services and not on infrastructure. "Alternative carriers, apart from a few exceptions, do not develop their own infrastructure.

"Slovakia has a low penetration of fixed lines, 27 percent, and the quality of the network is worse than in European Union countries. This makes the reason for investment in this sphere even stronger," Kukura underlined.

Foreign experience, ST emphasizes, shows that only a competitive environment based on infrastructure provides the potential for the further development of electronic communications.

Kukura suggests that a healthy environment requires investments. "Competition based only on services and sale does not create growth; it only divides the existing market," he added.

According to ST, the new bodies entering the telecom market should be motivated to invest in their own infrastructure.

Alternative operators disagree, saying that they already build their own fixed-line networks, but only in places where a truly competitive environment exists.

"This is primarily in international and intercity networks. But no one can expect that alternative operators will start building massive networks to access the local loops that could be competitive to the network constructed by ST over such a long time," added Ivan Leščák from GTS, one of the alternative carriers.

ST rejects the allegations widely voiced in the telecom sector that it halts the real process of telecom deregulation by not signing interconnection contracts that allow minor carriers to hook up with its network.

"Operators can succeed whether they signed an agreement with ST or not. The proof is that three carriers have already started to provide services, although none of them concluded any agreement with ST," said Kukura.

According to alternative operators, without an interconnection contract that gives them the right to connect phone calls from different networks, which are dominantly owned by ST, they can not be effective operators of fixed lines. Some of them were forced to conclude such a contract with the significant Slovak mobile operator Orange.

"The fact that phone users are not forced to use only the price list offered by the dominant [network] operator, and that they can choose through which carrier they will make their phone call is not usually very attractive for the dominant [network] operator. So it tries to limit the access of its competitors to the market. A typical move is to try to increase the flat payments for the phone loop, including the free call minutes, which are a fiction in the event that the customer chooses a different operator to make his or her call," commented Leščák.