Flash and talk, no results 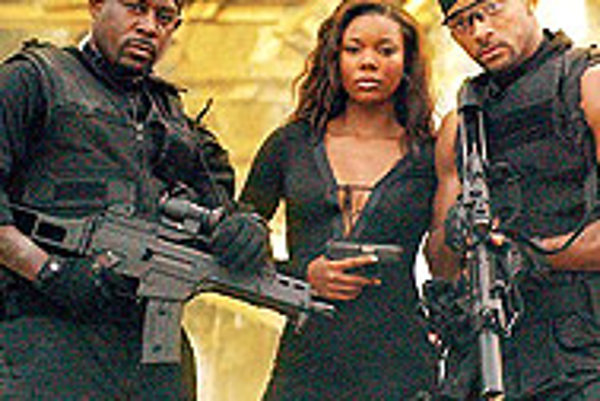 BAD BOYS II immediately demands attention. From its flashy opening credit sequence, with its brief stop-motion/slow-motion photography accelerating into digitally enhanced high contrast neon shots, it instantly recalls the opening of Fight Club. Director Michael Bay clearly admires the work of Fight Club director David Fincher; even the font used for each film's title appears to be identical. But whereas Fincher, whether effectively or not, uses his garish style to explore concepts, Bay simply indulges his obsession with flashy violence.

Shortly after the opening credits, Bad Boys announces that it takes place in a post-September 11 world when a swat team leader introduces a sting operation by talking about how the drug trade has changed since that world-changing event. When combined with the Fight Club allusion, this makes one wonder if Bay will attempt to explore America's culture of male violence.

However, this idea quickly disappears when the sting operation occurs, and the film's leads make their entrance. During a drug delivery to a Ku Klux Klan rally, narcotics officers Marcus Burnett (Martin Lawrence) and Mike Lowrey (Will Smith) jump out from behind their white sheets (in slow motion, of course), guns a-blazin', to arrest the trafficking white supremacists. Unsurprisingly, things go awry, bullets start flying (also in slow motion), and blood is graphically shed.

This in itself is not necessarily a problem: revisionist and spaghetti westerns of the late 60s or early 70s, Hong Kong action movies, and American low budget and Italian horror films have made beautiful, balletic violence and exaggerated gore to an art form. Frequently, these films use their techniques to critique or explore the culture of violence. Of course, an action movie by no means needs to be a cultural critique; impeccable, original style and technique can overshadow a film's ultimate emptiness.

But Bad Boys II boasts no such originality. The action sequences are certainly competent and fairly well executed, but have all been done better elsewhere.

The film's strength lies in the genuine chemistry between Lawrence and Smith. At points, though neither is a particularly great talent, they are enjoyable to watch, with Smith's charming straight man to Lawrence's caricatured madman. They constantly bicker, often about Marcus' recent self-help inspired aversion to violence. When this is contrasted to Mike's overzealous trigger-happiness, the film sets itself up to explore the nature of this violence that is so incessantly shown.

At a painful, excessive length of two-and-a-half hours, the film leaves plenty of room for such an exploration. Instead, the time is used for nothing more than comic non sequitors and plot progressions that lead up to the next explosive car chase or shoot out.