THE HEALTH Ministry is preparing a stricter smoking law that would harmonise Slovak legislation with EU standards. The current smoking legislation has often been ignored, according to some doctors involved in drafting the new law.
Among other novelties, the law would introduce larger health warnings on cigarette packages, as was recently approved by the EU. 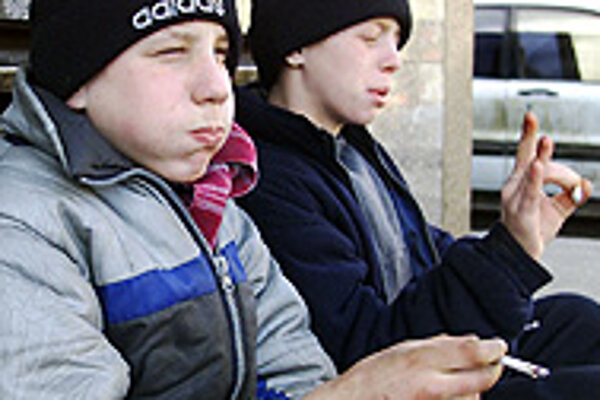 Font size:A-|A+0
THE HEALTH Ministry is preparing a stricter smoking law that would harmonise Slovak legislation with EU standards. The current smoking legislation has often been ignored, according to some doctors involved in drafting the new law.

Among other novelties, the law would introduce larger health warnings on cigarette packages, as was recently approved by the EU.

Just like in the EU, the new Slovak law would also halt the branding of cigarettes as "light" or "mild" and would introduce stricter regulations for smoking in restaurants.

The draft is also expected to increase all sanctions by 100%. The highest fine will be Sk10 million (€243,000) and will be imposed on importers of tobacco products found to be breaking the law's provisions.

Anti-smoking activists welcomed the move. Eva Siracká, president of the Slovak Anti-Cancer League (LPR), said to The Slovak Spectator that the "tobacco industry in general is focusing its products on the world's developing countries, and the countries of central and eastern Europe are among these states."

"Smoking is a global epidemic, and all anti-cancer organizations, including ours, consider the fight against smoking to be a priority," Siracká said.

Siracká said that statistical data from Slovakia is alarming, with Slovak youth being the most at-risk group. Some figures even suggested that Slovak children as young as 11 have experimented with cigarettes.

Protecting non-smokers is also believed to increase the public's awareness of the health damages that smoking causes. One of the draft's authors, Róbert Ochaba, a physician from the State Faculty Health Institute (ŠFZÚ SR), hopes that more people will begin to report breaches of the law to the respective authorities.

"We discovered that the existing law has not been followed, and that few people reported breaches. Also, the fines were too low. Slovaks do realize the health risks of smoking, and we want this law to help the country's non-smokers better protect their health," Ochaba said.

According to health statistics, about 26 percent of Slovak women and 42 percent of men smoke regularly.

"There is still a large proportion of people who don't smoke, and they have the right to be protected from the negative effects of this phenomenon," Ochaba said.

More has to be done in the sphere of prevention as well, according to Siracká of LPR. Her organisation is one of the country's most active groups in smoking prevention programs.

"It is rather sad that we are seeing a growing number of young children falling into the habit of smoking, and it is also interesting that about 36 percent of Slovak doctors are smokers themselves. In Britain, for example, only 20 percent of doctors smoke, according to data we have received," Siracká said.

According to the draft, a cigarette will be limited to contain no more than 10 milligrams of tar and one milligram of nicotine.

Restaurants that have smoking areas will have to make sure these are divided from the non-smoking areas by a construction wall, or else ban smoking in the establishment during meal times.

Ochaba said he hoped the new law would also encourage non-smokers to report breaches of the law. They will be able to voice complaints to their local municipalities and to supervisory bodies, such as the state-run business inspection authority.

According to Ivan Koza, head of the state-run Institute of Oncology, every year there have been about 22,000 new oncology patients in Slovakia.

In an October 7 interview with the Slovak daily Národná obroda, Koza said that although recent overall figures showed a slight decrease of smokers in the country, women were catching up with men in terms of deaths resulting from lung cancer.

"We have to provide citizens with effective information regarding a healthy lifestyle," Koza said.

According to Siracká from the LPR, the new law is one good tool to achieve that goal.

"The figures are alarming. Globally, about 4 million deaths per year are a result of smoking. Some prospects say that in 30 years, this will grow to 10 million if nothing is done about smoking prevention."