THE KOŠICE region, which stretches over 6,752 square kilometres, is located in southeastern Slovakia, borders the Prešov and Banská Bystrica regions, and shares a state border with Hungary and Ukraine.
The eastern part of the region covers the east Slovak lowlands, which contain the country's lowest point, at 94 metres above sea level. 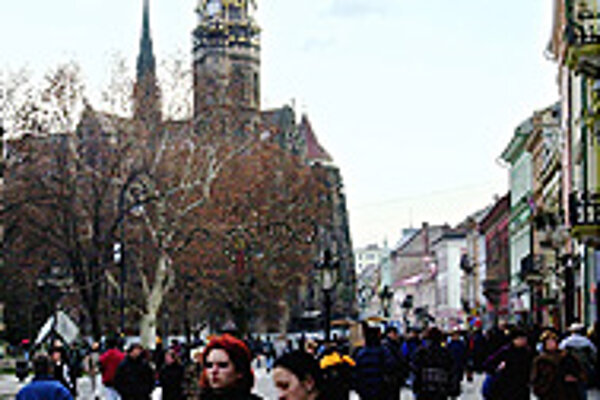 Font size:A-|A+0
THE KOŠICE region, which stretches over 6,752 square kilometres, is located in southeastern Slovakia, borders the Prešov and Banská Bystrica regions, and shares a state border with Hungary and Ukraine.

The eastern part of the region covers the east Slovak lowlands, which contain the country's lowest point, at 94 metres above sea level. The Spiš and Gemer mountain ranges add hilly flavour to the region, which on the west has the Slovenské Rudohorie Mountains. Rivers and streams run through the lowlands, mostly collecting in the largest river, the Bodrog.

The region, which counts 767,285 inhabitants, has a population density of 113 inhabitants per square kilometre. The region has Slovakia's second biggest city as its capital, and an overall urbanisation level of 56.5 percent, according to the Slovak Statistical Office.

A Hungarian minority makes up 11.15 percent of the population, while 3.9 percent identified themselves as Roma in the last national census. Other national minorities are Czech, Ukrainian, Ruthenian, German, Russian, Bulgarian, and Polish.

American steel giant, US Steel, acquired Europe's largest steel factory in 1999 and has assured the region of an industrial future. Košice enjoys modern road, rail, and air connections to surrounding countries. A high level of education and underemployment also characterises the region.

Košice opened its EU liaison office in Brussels in the beginning of this October. The office will function as a contact point between the Košice regional government and the EU. It will lobby in the European institutions for regional development and projects.

In terms of exports and GDP, the region is the second most important in the country, following Bratislava.

The largest chemical company in the region is Chemko Strážske, a.s. The company is located in the Michalovce district, along with the gas storage utility, Nafta Gbely.

Due to the decay of its mining industry, the Rožňava district is turning to engineering and ecological projects.

The cities of Krompachy and Rudňany, in the Spišská Nová Ves district, are known for metallurgy operations and iron ore mining. Similar operations are also found in the city of Gelnica.

Agriculture makes a considerable contribution to the region's economy, depending on the terrain and climatic conditions of particular areas. The eastern lowlands are suited to oil-producing plants, while vineyards surround Slovenské Mesto and Sobrance.

The level of foreign direct investment (FDI) in the region reached Sk37.19 billion (€900 million) in June 2002, according to the National Bank of Slovakia. This is the second highest in all the regions. The region had a 15.4 percent share of the total FDI of Slovakia in 2002.

The Strážske zone is mostly oriented toward chemical production, plastics processing and related industries, machinery, electro-technology, warehousing, and logistics. Already, 17 companies, which mostly operate in the above-mentioned industries, have established themselves nearby, such as Chemko, Chemza, Cenon from Italy, Lepidla, and Energetika.

In the Kechnec industrial park, only 18 kilometres from Košice, two companies have so far begun working; Molex and the Dutch company Gibos. Molex Slovakia is part of the US Molex concern, producing connectors for the automotive and telecommunications industry. Molex already operates 23,600 square metres of production halls, and in September it announced the opening of another 3,000 square meters of production space.

Among industries considered to have particular potential for development in the Košice region are machinery, tourism, and geothermal energy.

The region's capital, Košice, is a strong economic, cultural and administrative centre with 236,093 inhabitants. The Slovak Constitutional Court has its headquarters there.

The largest employer in the city is the steel giant US Steel, which has 15,000 employees. However, there are 20,478 companies in the city that alone create a significant share of the total GDP of Slovakia - 9 percent, according to the Slovak Investment and Trade Development Agency (SARIO). Of those companies, 600 are international.

The flow of FDI to the Košice region has increased significantly in the last few years, receiving the weightiest influx from the American company US Steel when it took over East Slovak Ironworks (VSŽ). The US company acquired majority ownership of the venture's metallurgy operations.

Following the steel giant, there are several other investors in the region, such as Sweden's SCA Hygiene Products, active in the paper industry with a plant in Gemerska Horka. Brazil Embraco has injected money into the machine industry. Germany's Siemens and Bosh is an investor in the electro-technological sector, where other investors are Japan's Matsushita Electronic, with a company in Krompachy, and Molex from the United States. Finnish investor Rautaruukki Oy, OULU is present in the metallurgy sector through the company Ranilla, s.r.o. The Italian investor AQAUFIL is present in Cenon, s.r.o., Strážské, while the German Siemens AG is an investor in Siemens Automotive, s.r.o., Michalovce.

German BHS Drives and Pumps operates in Michalovce, while an American investor is present in the food processing company Masospis in Spišká Nová Ves.

According to data from the Statistics Office, the unemployment rate in Košice reached 24.26 percent in 2002, scoring highest in Slovakia. The region thus has a 17.7 percent share of Slovakia's unemployment rate, with 96,785 registered jobless citizens. Of this number, 43,873 are women. In 2002, the Trebisov district suffered from a 30.51 percent unemployment rate, the highest in the region. Rožňava followed with a rate of 29.58 percent.

As for education, the region has 340 elementary schools, of which 15 percent offer training in Hungarian. There are 150 high schools in the region, attended by 47,311 students.

Universities and colleges are mostly concentrated in the city of Košice. One of the most important educational institutions is the Technical University, with schools of mining, environmental studies and geotechnology, engineering, metallurgy, electro-technology and information sciences, housing construction, economics, and applied arts.

The Pavol Jozef Šafárik University has a decent status, with faculties of medicine, natural sciences, public administration, and law. The University of Veterinary Medicine, which is the only one of its kind in Slovakia, is located in Košice as well.

In Košice there is a modern international airport, the second biggest in Slovakia. Through regular connections to Bratislava, Prague, and Vienna, travellers can reach almost any world destination.

The road and rail routes of the region are quite well developed. The E50 route runs from Žilina through Prešov, Košice, and Michalovce to the Ukrainian border. The E71 route connects Košice with Hungary, and the E571 route links Zvolen, Rožňava, and Košice.

In the region, however, there is only one 40 kilometre motorway that connects Košice and Prešov, including a connecting road leading to Košice. In 2001, highway construction was started, linking Rzesow, Krosno, Svidník, Prešov, Košice, and Miškolc.

The route should serve as an international corridor and connect to the Via Baltica highway that crosses Poland and connects the Baltic countries with Finland.

According to the Slovak Investment and Trade Development Agency (SARIO), the highway will promote transportation through Hungary, Poland, and Slovakia and generate substantial transit opportunities for freight shipments.

Over 76 percent of the population is connected to the public water supply system. However, this is approximately 3 percent less than the national average.

The region has a total of 26 water treatment plants. A public sewer system is connected to 56.27 percent of households.

Marta Ďurianová
contributed to this report.