Leading the New Age of Discovery

A CONTEMPORARY in the field of planetary physics, Ladislav E. Roth, was recently awarded the International Prize by the Slovak Academy of Sciences (SAV).
The prize, which is the most prestigious award of the academy, highlights his far-reaching contributions to space exploration. Among Roth's achievements are his participation in missions such as Apollo, Mariner, Viking, Magellan, and the Cassini-Huygens mission to the Saturnian system. 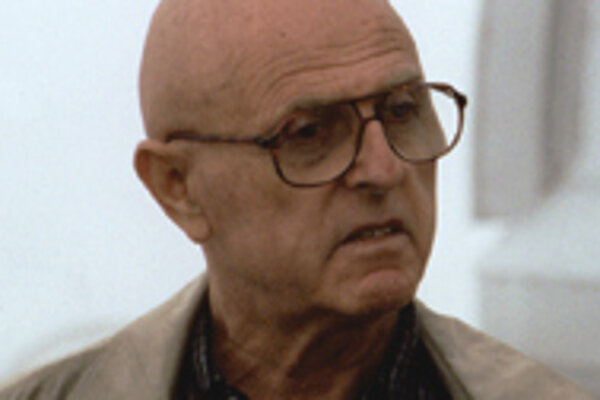 Font size:A-|A+0
A CONTEMPORARY in the field of planetary physics, Ladislav E. Roth, was recently awarded the International Prize by the Slovak Academy of Sciences (SAV).

The prize, which is the most prestigious award of the academy, highlights his far-reaching contributions to space exploration. Among Roth's achievements are his participation in missions such as Apollo, Mariner, Viking, Magellan, and the Cassini-Huygens mission to the Saturnian system.

Roth was born in the eastern Slovak town of Košice in 1936, and studied electrical engineering at the Czech Technical University in Prague. He received his Ing. Diploma in 1958. Without permission, the young engineer then left communist Czechoslovakia in 1966, and headed as far west as the Institute of Geophysics and Planetary Physics at the University of California, Los Angeles.

There he met and later joined the ranks of NASA scientists and participated in the exploration of Mars, Venus, the Moon, and the satellites of Saturn. He has also done experimental and theoretical research of various new technologies, such as microwave remote sensing and radar altimetry.

This is the seventh time the award has been bestowed in the academy's history. On the occasion, The Slovak Spectator spoke to Roth about his achievements, plans, and his ties to Slovakia.

The Slovak Spectator (TSS): What does the SAV International Prize mean to you?

Ladislav E. Roth (LER): It is a great honour to receive the International Prize of the SAV. Considering the circumstances under which I left Slovakia, I am deeply moved by the Academy's magnanimity.

TSS: Your academic career began in Slovakia, but not in your current field. Why the change in direction? What caused you to gravitate towards planetary physics?

LER: I may have changed the direction of my career but hardly its contents. The fields of astronomy and electrical engineering have attracted me ever since I can remember. The imaginary world of science adventurers, exemplified in the writings of Jules Verne, attracted me as well.

Shortly before graduating from II. Gymnazium in Košice, and under Verne's influence, I wrote a paper on the feasibility of flying to the moon. The paper was a compilation of the then-held negative views on the topic of space travel. I read it to my puzzled classmates. Little did I know that this paper, as amateurish and empty as it was, presaged the future course of my work.

TSS: You have been involved in collaborative publications with Slovak-based scientists in your field and have maintained close contact with the SAV long after international, one might even say interplanetary, success. Has this been important?

TSS: Considering its size, on what level is Slovakia able to contribute to the international scientific community? Can it be competitive? Where do you see Slovakia's future in this regard?

LER: I am not qualified to have opinions on the scientific enterprise in Slovakia.

In most general terms, science, despite its universal character, constitutes a part of national culture. Any nation, if it wishes to maintain its identity, is bound to vigorously cultivate all components of culture, including science.

Slovakia is certainly not capable of mounting an expedition to Mars, say. But, given adequate support, Slovakia is perfectly capable of excelling in the 'Small Sciences', i.e., those branches of science that do not require heavy capital outlays. The 'Big Sciences' are turning out to be too expensive even for big powers. That is why organisations such as the European Space Agency (ESA) have been established. These organisations allow the small nations to sit at the table of the "Big Sciences". If ESA decides to go to Mars, Slovakia will be able to participate.

TSS: You have contributed to a variety of space exploration missions. What kinds of things have we been able to learn from them?

LER: Probably all scientists and engineers who took part in planetary exploration would say the same: Space missions forced us to abandon terrestrial parochialism and view Earth in the widest planetary context - as a solitary, fragile abode of life in the vast, cruel cosmos.

The late Carl Sagan expressed it best when, after having contributed to several planetary missions, he began referring to Earth as the Pale Blue Dot - a pale blue dot, almost lost and barely twinkling. We should try our best not to extinguish it.

TSS: What discoveries lie on the horizon?

LER: We still remember the Age of Discovery from our history classes. The Age of Discovery, roughly from 1400 to 1600, was the time when Europe discovered the world outside Europe. Virtually every voyage into the world's unknown parts resulted in some new and startling discovery. Planetary missions are still in a stage comparable to the Age of Discovery. Every planet except Pluto has been visited at least once, and each visit resulted in new knowledge and new surprises.

One planet, Mars, has become an object of concentrated attention. Three spacecrafts are currently on route to Mars - two launched by NASA, one by ESA. A number of exciting missions to Mars and to other solar system targets are being proposed. I spent much of my career exploring Mars and Venus. It is a metaphysical thrill to explore the unknown surface of a planet for the first time.

Publications: Roth was responsible for editing The Face of Venus, a comprehensive report on the results of the Magellan Radar Mapping Mission to Venus, published by NASA in 1995. The University of Constantine The Philosopher, Nitra, where he received his Dr. h. c. in 1998, is scheduled to publish his book on the Cassini-Huygens mission to Saturn and Titan in the near future.