Rybníček: STV was a milking cow

IN THE NINE months since Richar Rybníček was named to lead the troubled public broadcaster Slovak Television (STV), dramatic changes have taken place in the institution, including massive lay-offs and the reduction of robust debts.
Rybníček has fired hundreds of STV employees and, through strict economic measures, stopped the accumulation of its spiralling debt, which is now at Sk680 million (€16.2 million). 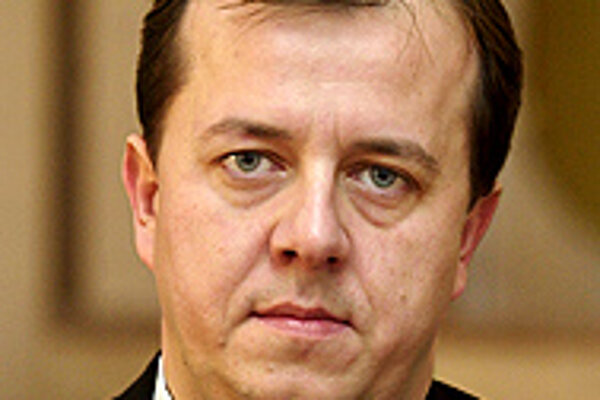 Font size:A-|A+
IN THE NINE months since Richar Rybníček was named to lead the troubled public broadcaster Slovak Television (STV), dramatic changes have taken place in the institution, including massive lay-offs and the reduction of robust debts.

Rybníček has fired hundreds of STV employees and, through strict economic measures, stopped the accumulation of its spiralling debt, which is now at Sk680 million (€16.2 million). The transformation of the postcommunist broadcaster proved impossible for the dozen previous directors who have led the station since the creation of independent Slovakia in 1993.

The merit of Rybníček's dramatic measures at STV can be argued, but the plan of this 33-year-old manager to turn the station, plagued by past political abuses, into a well functioning, independent media operation that would be a "shop window" for Slovak journalism is possibly the most ambitious the broadcaster has ever faced.

The Slovak Spectator spoke to Rybníček on October 20.

The Slovak Spectator (TSS): Even your critics admit that you have achieved positive results in addressing STV's massive debt in the nine months since you took office. The debt, however, is still counts hundreds of millions. Do you think the state should pay the outstanding debt?

Richard Rybníček (RR): There are only two possibilities - either the financial burden of the past will be paid by the cabinet, or STV can start paying the debt, which will take us about 10 years. On this point, my strategy is clear. I am asking the [state] to cover the loss so that STV can start working from zero. This is the only way we can carry out reforms at the station during my term in office.

TSS: How do you explain the failure of previous directors to seriously address the elimination of the debt?

RR: It has to be said that since Slovak independence in 1993, STV has cost the state some Sk8 billion (€190 million). That has been because there was not sufficient courage to carry out [reform] steps and also because the previous directors failed to make use of their first year in office. Most importantly, I think some of them allowed various creative groups, producers, and production firms to push them into buying their programs and signing contracts without knowing the real economic situation of this institution. Many thought that since STV broadcasts under law, which basically makes it impossible to turn the station off, the state would always cover all debts.

TSS: Are you optimistic that the cabinet will cover the old debt?

RR: I hope very much that the cabinet will do it. I am trying to show to the cabinet that this institution has started an economic revitalization and that we are seriously interested in reforming STV.

TSS: If the cabinet agrees to cover the debt, when do you think STV will start making a profit?

RR: If the debt is paid off in the first two or three months of next year, I suppose the first serious positive economic results could come at the beginning of 2005.

TSS: A draft law on STV was submitted to parliament recently but you have opposed the legislation. Could you summarize your objections to it and tell us what a good law on STV would look like?

Since the 1990s the term public has come into usage but we have no law, no definition of what that term actually means. That is why the law is crucial for moving towards the resolution of the legislation on STV and SRo.

The draft law on STV that is in parliament now is a result of interest groups who want to advocate their interests through the television station. I am convinced that the law as it is proposed is detrimental to STV. It is not possible that a draft of a law on STV, at a time when I have a clear project for the TV station, be prepared [by the Culture Ministry] without any consultation with STV.

TSS: You recently told media that there was an unspecified group who held talks with you via mediators and who were interested in, as you put it, an indirect privatisation of the STV2 channel. Do you think that the draft law on STV, recently approved by the cabinet, could help this group to privatise the channel?

RR: It could at least help secure them a nice package of STV money. Let me just mention the clause [in the draft law on STV] that we would be obliged to spend 20 percent of viewer fees on original domestic production. [Slovaks have to pay a symbolic sum each month as a contribution to the broadcaster that, in addition to state funding and revenues from advertising, constitutes STV's budget, ed. note]

In reality that means that STV would have to spend Sk300 million (€7.1 million) [a year], which is a huge sum in STV terms, on programs produced at home. No one, however, can guarantee that there will be enough quality productions that we would want to buy. This, of course, will be good for those who live from this type of production.

It is exactly people from this kind of environment who now say that they work on contract for various finance groups that allegedly want to save STV.

There are many people from the media production environment who used STV as a milking cow for years and only cared how they could squeeze as much money out of this station as possible. They didn't care whether or not their requirements would ruin the institution.

TSS: Last year the STV news department introduced a code of ethics that was inspired by a similar code in the British BBC. Do you rely on some western model with your reform project as well?

RR: With respect to the reporters and news department as a whole, everything depends on what kind of people hold the positions, and what the editors' goal is for the department. I want to bring in more people to the news department who have experience working abroad because I think that so far we do not have many Slovak journalists with experience in well-functioning foreign media providers.

Our reporters lack experience with western-type media operations, and that is why we need help. In the foreseeable future someone who actually trains BBC people will come to STV.

TSS: For the broadcaster in general, do you have a similar foreign model?

RR: My model is clear; its ideal is the so-called holding type of operation, which basically means running an institution through finances.

STV's directorate should be separated from the studios, and the firm should be kept on a level of effectiveness that allows the station to operate with at least a balanced budget.

TSS: For about a month now you have run the news department, since the previous editor in chief (EIC) left STV. You admitted that it was not ideal for you to be an acting EIC in addition to your role as director. Have you found any suitable EIC candidates yet?

RR: Not yet, although I have several tips. But I have to make sure they will be good for the position, because the STV EIC not only has to be an experienced journalist but also a manager and organizer. That kind of person is not easy to find in Slovakia.

TSS: It is generally thought that STV cannot compete in terms of wages, as well as working environment, to the commercial media. Is money part of the problem you have with finding an EIC?

RR: I don't want to sound pathetic, but what I am trying to do here with my team is not about money. The job is a professional challenge that, even for less money than in the commercial sphere, people see as an opportunity to gain big prestige.

TSS: Your recent decision to hire Marián Kardoš, former spokesman for the ex-PM Vladimír Mečiar, to the position of business reporter in STV caused a big stir in media circles. You later said that you would be willing to hire other journalists who worked in STV under the Mečiar government, when the channel served as a mouthpiece of the ruling power. Are there not enough journalists in Slovakia who have not compromised themselves professionally?

RR: I call this peacemaking, sending out a certain signal that this institution should work according to professional criteria. So far we have lived in a country where we label people "the good guys" and "the bad guys". I have an ambition to put this institution on firm legs and make it into a professional body.

I admit that these are controversial decisions, but they are related to the reform. My idea is to try and change people's thinking. We should stop thinking that this institution is only for such and such people and the others are not allowed. I assure you that all who fail professionally will be fired.

TSS: You came to STV from a private station, Joj. Coming from the commercial sphere, what struck you most about STV as a state institution?

RR: The absolute lack of restraint with money and the absolute disrespect in the [use of the] money from taxpayers. There was an absolute ignorance of managerial rules in running STV. And there was also a total lack of willingness to do even a bit more than is officially required, a complacency with a system that allows you to work from 7.30 a.m. to 3.30 p.m. and always get paid, and where no one wants you to work more effectively. In short, [there is] a perfectly preserved communist manner of thinking.

Even today it drives me to total despair every time I am reminded of the communist thinking in this institution. We can buy new technology for the broadcaster but changing the way of thinking and the attitude towards work will take years.