SWEDEN currently has its diplomatic representation in Slovakia in the form of a consulate. However, this Scandinavian country will open an embassy in Bratislava in March 2004. Cecilia Julin, who arrived in Bratislava directly from Washington, where she represented Swedish interests primarily in the sphere of the economy, has been preparing for her ambassadorial mission since the middle of September 2003.
The Slovak Spectator (TSS): Your country is bringing something unique to Slovakia. In order to work more effectively, you will share some embassy activities with Finland. Could you share some details of this cooperation with us? 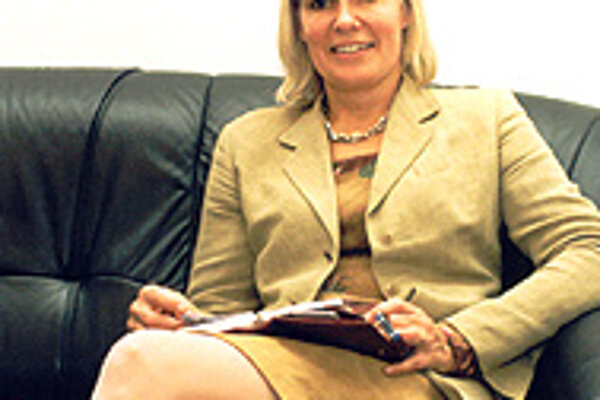 SWEDEN currently has its diplomatic representation in Slovakia in the form of a consulate. However, this Scandinavian country will open an embassy in Bratislava in March 2004. Cecilia Julin, who arrived in Bratislava directly from Washington, where she represented Swedish interests primarily in the sphere of the economy, has been preparing for her ambassadorial mission since the middle of September 2003.

The Slovak Spectator (TSS): Your country is bringing something unique to Slovakia. In order to work more effectively, you will share some embassy activities with Finland. Could you share some details of this cooperation with us?

Cecilia Julin (CJ): We have a joint project with the Finnish embassy in the use of some services. We will be located in the same building, which is being erected now on Palisády. We will share the reception desk personnel, and part of the agenda will also be processed more effectively under joint administration, for example visa and consular issues within the Schengen space. If it proves functional, the project of economizing the operation of embassies will take root in other parts of the world too. Today, the European Union is discussing the possibility that some countries could perform delegated tasks for other countries. Certainly, we will nourish political and economic relations with Slovakia separately.

TSS: Sweden has so far processed its Slovakia-related agenda through its embassy in Prague. Presumably, this form cannot match the needs of the new reality.

CJ: Sweden had the ambition to open an embassy in Bratislava immediately after the split of the Czechoslovak federation. Though this is only happening now, it will make Slovakia's entry into the European Union happen more promptly. Sweden has been trying to open embassies in each EU member country, while among future members, we only lack embassies in Malta and Cyprus.

TSS: Have you had any contact with Slovakia or with the Slovak Embassy in Stockholm?

CJ: I have had indirect, but not personal, contacts because I arrived here directly from Washington. Before that, I served at embassies in South Africa, Israel and Peru. Slovak Foreign Minister Eduard Kukan will pay an official visit to Sweden on November 9-10, so we will have a good reason to discuss the Slovak agenda. As an ambassador, I have two major tasks: monitoring Slovakia's path to the EU and trying to shape the closest possible cooperation between Sweden and Slovakia in the spheres of politics, economy, and social affairs.

TSS: Will the economic agenda receive the greatest emphasis?

CJ: Certainly. We will help Swedish industry become more established in Slovakia. We have a wide support agenda, helping the arrival of new firms and seeking suitable business partners for Slovakia. We also have the ambition to help Slovak entities find their way to Sweden. In Slovakia there are many Swedish firms, and the way they have managed to operate here is a pleasant surprise for me.

As for political ties, along with issues linked to the country's accession to the EU, we are interested in the relationship between Slovakia and the United States as part of the relationship between Europe and the USA. The way the dynamics of these relationships change during the time of EU enlargement is an important issue, which will also be felt in Slovakia. Europe has found it difficult to coordinate a unified stand towards the United States, as each country is pursuing its own economic and political relationships with the world's economic superpower. It is good when the European countries strive to reach the highest possible unity. I do not think that Europe as such can reach a unified stand on every particular issue. However, my experiences say that the United States expects a unified stand from Europe.

TSS: Which of your experience from your previous missions can you use here in Slovakia? What experiences can Sweden offer to this central European country?

CJ: We can offer Slovakia our experience with EU membership and share what we have learned from our mistakes and our successes. When Sweden was entering the EU eight years ago, I served at the Swedish foreign affairs ministry. I can use the experiences I gained from interaction with European structures when I meet with Slovak partners. I also have some understanding of the US view on transatlantic relations.

I see space for mutual inspiration. This is my first mission in a country as young as Slovakia. I am glad to see the country's enthusiasm and I find its economic reforms very impressive. Seven or eight years ago we installed a relatively brave pension reform, which has proven to be a success. Slovakia also faces pension reform issues, and I think Sweden could offer its related experiences. However, Slovakia could become an inspiration for Sweden, especially in the sphere of health care reform. Sweden could also help in the sphere of education. Europe aspires to become the strongest economy in the world, and while economy is the main part of that effort, research, development, and education are important for Slovakia.

TSS: Slovak parliamentary parties agree that there is no other alternative for the country but EU membership. Are the Swedish people greater pessimists or realists than Slovaks?

CJ: I have had conversations with Slovaks for whom entry to the European Union is a natural historical step and they are quite united in that opinion. When EU entry talks were held in Sweden, there was only a very feeble difference between the number of supporters and opponents of entry. The public debate was of economic character, elaborating the impacts of the EU on Sweden's economy, and unemployment was a hot topic. Finally, a narrow minority said yes to the EU. After entering the union, the Swedish currency weakened slightly and the people felt fooled. Things did not appear the way they were promised. Sweden feels mentally close to neutrality and independence in decision-making; this comes from Sweden's positive historical experiences with neutrality. In the political sphere, the environmental party is the strongest opponent of the EU.

TSS: Is this so, despite the fact that Sweden has its commissioner for the environment, Margot Wallstrom, in Brussels?

CJ: Yes, and this is a good thing. Sweden has things to offer in this sphere.

TSS: What Swedish values do you plan to promote in Slovakia?

CJ: When Sweden held the rotating presidency in the EU two years ago, our main agenda included "three Es" - enlargement, employment, environment. We consider employment a crucial issue and would like to cooperate in this sphere. As for the environment, people in Sweden have a generally strong environmental awareness and relationship towards nature. Apart from that, we would also like to share our experience from human rights and equality issues. In the Swedish parliament, 47 percent of the deputies are women, while in Slovakia they make up only 17 percent. In the Swedish cabinet, there are 11 female ministers ,while in the Slovak cabinet, there are none.

Another sphere could be social development. We think that a society can only have a healthy development if it can combine a dynamic economy with a functioning social system. Our economy minister used to say that it is thanks to our developed social system that people do not feel endangered by technical development, which has a positive impact on the economic development of the state. The employee in the factory does not have to fear that new technologies will push him out of work. Even if that happens, the worker can join the education process within the system and be plugged into the new economy.

TSS: Will the embassy also find space for cultural issues in its operation?

JC: On the occasion of launching the embassy next spring, part of our focus will be cultural activities, featuring exhibitions and musical performances. In the long run, we will focus on cultural exchange between the countries to the widest possible degree. However, our priority will remain bringing Swedish culture closer to the Slovak public. I also see a space for cooperation between the Swedish embassy and Swedish firms in the sphere of financing cultural activities in Slovakia. It could help the firms become visible through culture, which lacks resources.

There are a couple of big Swedish firms that are very satisfied with their presence in Slovakia. Among the biggest are IKEA, SCA, Volvo, AstraZeneca, and others.