Hearing the early harmony of Europe

THE PHILHARMONIC orchestra of early music, Musica Aeterna, is getting ready to celebrate its 30th anniversary in Bratislava on October 30.
The ensemble has recently returned from Spanish Bilbao, where it performed works by lesser known French composers and played music to Christoph Willibald Gluck's Orfeo ed Euridice for two concert evenings. 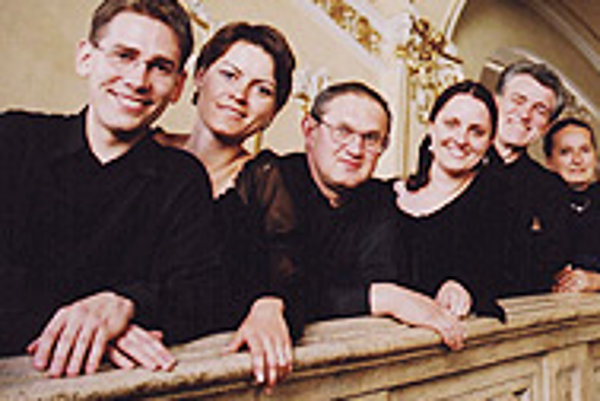 Font size:A-|A+
THE PHILHARMONIC orchestra of early music, Musica Aeterna, is getting ready to celebrate its 30th anniversary in Bratislava on October 30.

The Slovak Spectator spoke to the ensemble's artistic director, violinist and researcher, Peter Zajíček, about the orchestra's three decades, on October 17.

The Slovak Spectator (TSS): How was your performance in Spain?

Peter Zajíček (PZ): Spain has started to open more and more to Musica Aeterna. Our small, particular contributions [performed there] five years ago have slowly grown. Playing in Bilbao two years ago and touring the country one year ago have caused Musica Aeterna to become well known as an ensemble that carries new thoughts and plays music different from what we usually hear on commercial stages.

Apart from the two opera performances with leading soloists of the Spanish opera scene, conducted by Stephen Stubbs, we also held a solo concert. The [programme of the] concert aimed to bring into the spotlight our thanks to European music culture, the Western civilisations that, at a critical moment of our musical growth, helped us integrate into the so-called 'baroque business', into which it was almost impossible to get in the early 1990s.

The [concert's] programme featured mainly French music, because the French - headed by Phillipe Beaussant, a famous writer and musicologist, and Marc Ecochard, a musicologist and producer of musical instruments - helped us bypass all obstacles and fully enter the comfortable life.

PZ: We usually play Slovak works as additions, or when such works are explicitly requested. Obviously, we try to promote Slovak music as much as we can, but regarding certain commercial issues that are part of such a spectrum of concerts, we have to consider the commitments resulting from our contracts.

TSS: The next concert where a Slovak audience will have the opportunity to hear you playing is the celebration of your 30th anniversary. What programme have you chosen for the concert and why?

PZ: It's a bit connected with the programme for the [recent] Spanish concert. I personally love to play French music. The programme for the 30th anniversary reflects that music to which I am very tied and grateful, because, as I say, the French played a decisive role [when we began]. There were also people from English-speaking countries here at that time that, obviously, helped us a lot as well. At that time, we hardly had any information [on such music] and [without them] we would have never made it into the world like we did.

The programme will include the a symphonic concert by Antoine Dauvergne, who was a significant composer of the late 18th century; a cantata by Sebastian Brossard, which has a very nice and gentle theme that will prepare us, calm us down, so that we can openly listen to the beautiful work by Marc-Antoine Charpentier, the famous Te Deum. It has been my desire to perform this work in its original form, and the time will be right at this concert.

TSS: Have you invited any guests?

PZ: My friends from the Czech Republic and Hungary will play with us, as we need more instruments. French conductor Paul Colléaux, who is an expert on this music, will lead the programme. The orchestra will have around 15 to 20 members, as will the Slovak Philharmonic Choir, which will perform in a reduced number.

Among the soloists, the audience will hear world-famous bass Peter Mikuláš and alto singer Marta Beňačková. Richard Sporka, who is a significant Czech tenor, will also perform with us, as will our two ladies, sopranos Kamila Zajíčková and Janka Pastorková.

TSS: Let's return to the beginnings of Musica Aeterna. The idea to establish the ensemble came from the mind of professor Ján Albrecht. What was the aim behind forming such an ensemble?

PZ: It's quite closely connected with the musical past of Bratislava. The family of Albrecht is an old Pressburg family. I even knew Ján Albrecht's mother, who used to tell us about things few [people] would remember. She was the first lady who jumped on a horse and rode it the 'male' way, which at that time meant a revolt. She was a highly educated, clever woman, who taught languages. Albrecht's father was a composer and director at a music school.

Their son, Ján, followed the spirit of the musical family gatherings and meetings with aristocratic societies, where the attendees would play for a whole Saturday. However, he would not found his ensemble before he knew exactly what he was going to do with it. He prepared the repertoire far in advance. He searched for [musical] scores, for the idea of what the ensemble should be, for many years. The ensemble, which originated in 1973, has a well-prepared repertoire. At the beginning, it played music from older periods - gothic and renaissance; and gradually, with new musicians coming, it shifted to baroque, and even to classicism.

Albrecht's work played a key role at that time, as there was no other ensemble that would play such music. Suddenly, the Bratislava audience could hear music it had never listened to before, including the works coming from Slovak provenience.

TSS: You entered Musica Aeterna two years after it was founded. How did the ensemble look at that time?

PZ: It was smaller. There were four violins, two or three violas, a violoncello, a double bass, and a harpsichord.

When we were about to finish our studies, we realized that we had put too much energy into what we had done at the Albrecht's house, where so many compositions and premieres had been performed, but nobody else but us had heard them. So, we asked the public at that time if it wanted us to continue, if it wanted to hear the [revived] works that had been left and forgotten. It did, and so we continued.

TSS: In 1986 you became part of the Slovak Philharmonic. What did it mean for the ensemble?

PZ: We grew to 18 members, but gradually the number has declined. It is mainly because of financial reasons. I can say that today we have reached the size of a standard baroque orchestra - six violins, two violas, a violoncello, a double bass, a harpsichord, and a soprano and flute occasionally.

TSS: What does your repertoire include?

PZ: Our repertoire is very wide. It starts somewhere in the 1650s and ends in 1800. Its list, which is a half-hour of reading, contains several hundred compositions on several pages. Around a hundred of the works were composed by the composers who worked on [what is today] Slovak territory.

The [concert] programmes, composed by Professor Albrecht, often started too early, somewhere in the gothic period, and the closing works reached to the middle the baroque. Today, I try to build programmes in a more compact form, so that they bring the audience an integral view of certain cultures.

TSS: How difficult or easy is it to play this kind of music?

PZ: The big movement for early music started in the early 1970s, during very favourable conditions, when many ensembles of this type originated. Excellent English, German, Dutch, or French ensembles were established at that time that still exist.

In comparison to [western European ensembles], we were a bit disadvantaged, as we didn't have the old instruments.

TSS: When did you switch to period instruments?

PZ: At a certain moment [in our playing] we bounced into problems we couldn't solve with modern instruments. I'm quite a restless person, and I lost sleep thinking about our future. I met with people who knew much more about these things and, after talking to them, I realised that it's inevitable that we switch from modern instruments to old ones.

First we took our own instruments and had them repaired. Slowly, we changed the instruments within the whole ensemble.

TSS: When was it?

TSS: Can you predict where Musica Aeterna will be in the next 30 years?

PZ: The main changes will be in our quality. It has to grow, as it is the only guarantee that the world will accept us. Another aspect is a good orientation in programme activities - to establish the right direction and set long-term goals that will call attention to Slovak musical history.

I would be most happy if Slovakia and its young musicians were integrated into the context of European musical culture - so that the country would become a member of the big European musical family.

The performing schedule of the ensemble is created at least two years in advance. They will play in Bulgaria, Croatia, Spain, and Brazil, possibly Mexico, as well as tour central Europe with the French ballet ensemble L' Éventail, specialising in baroque dance. Musica Aeterna plays around 30 concerts a year and has issued around 20 CDs. In the near future they plan to record an integrated album of Telaman's works for chalumeaux, a baroque brass instrument, in cooperation with French musicians.

What: Gala concert of the 30th anniversary of the Musica Aeterna founding.
When: October 30 at 19:00.
Where: Koncertná sieň Slovenskej Filharmónie
(Concert Hall of the Slovak Philharmonic), Palackého 2, Bratislava.
Tickets: Sk120.Tel: 02/5443-3351.
For more information visit www.filharm.sk.