Dancing with life and death

MAN and Woman dancing with Life and Death, embracing as well as fearing them - these are the themes of the ballet Requiem, put together by Zuzana Mistríková and Ondrej Šoth. 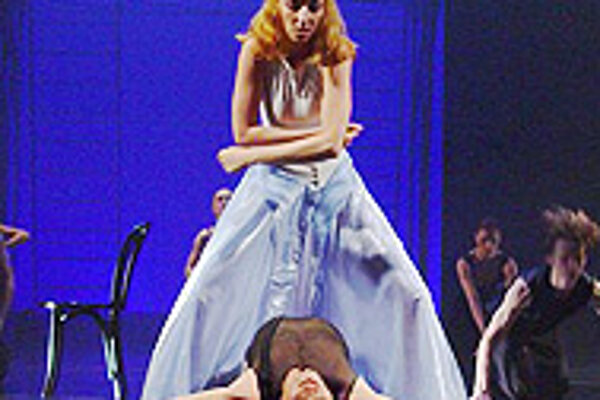 MAN and Woman dancing with Life and Death, embracing as well as fearing them - these are the themes of the ballet Requiem, put together by Zuzana Mistríková and Ondrej Šoth.

This abstract ballet with contemporary choreography had its premiere at the Slovak National Theatre in Bratislava in 1988. Currently it belongs to the repertoire of the Košice State Theatre, which staged its last 2003 performance on October 16. The theatre will have more performances next year.

The dance show starts with a shorter piece choreographed by Šoth to Gustav Mahler's Adagietto from his Symphony No. 5. To the romantic tones we see a chair and a man tied to it, wrestling with it. In the background there is a woman in red, as if longing for love. Two men dance around her and with her. This simple love-triangle dance serves as a warm-up to the second, more powerful piece.

Inspired by Giuseppe Verdi's monumental Requiem mass, Šoth has created a powerful vision of the human being wrestling with the universal theme of living and dying. The inevitable cycle of life and death is the underlying current in the piece, and the dancers vividly portray human characteristics, such as anxiety and passion.

The protagonists are Life (Alena Janíkova) and Death (Andryi Sukhanov), opposite to which stand Man and Woman (Maksym Sklyar and Eva Jenčková), as symbols for love, beauty, and relationships between people.

In the beginning of the performance, however, it may be a little confusing for a viewer to know exactly who is who. When Sklyar starts dancing his part of Man, dressed in men's ordinary, black clothes, one can easily mistake him for Death. Death would be the one expected to wear black, but instead he wears a more modern and colourful outfit. Nor with the women portraying Life and Woman is it quite clear who is who. No doubt, the choice of costumes could have been better.

Confusing costumes aside, the soloists overall are not as impressive as the whole dancing ensemble. Sukhanov makes a powerful performance as Death, while Janíková is clearly weaker in her role as Life. Sklyar is not very convincing in his portrayal of Man; nor is Jenčková in her part as Woman.

The choreography succeeds in painting image after image about the struggle of life and the eternal human fear of death to Verdi's dramatic and passionate mass.

Under Šoth's lead, the image of Death shows several faces - sometimes it is terrifying and painful; at other times, it serves as a release. Man and Woman represent the complexity of love as something both beautiful and painful.

The fundamental scenic requisite throughout the performance is the chair. It symbolizes human certainty, a base in an unstable world. If the chair is lost, whether voluntarily or because of fear, humans die. Dying is, in the end, as natural living.