The woman with chisels in her bag

BORN in Bratislava, puppet designer and woodcarver Alena Malíčková was never taken to the Bratislava Puppet Theatre at Dunajská as a child. She first entered it after she grew up - in 1985, as its employee - and stayed. Most of the puppets that children see today at the theatre are hers.
"I always wanted to be an illustrator of children's books," says Malíčková, whose hands today are rough and covered in scars. 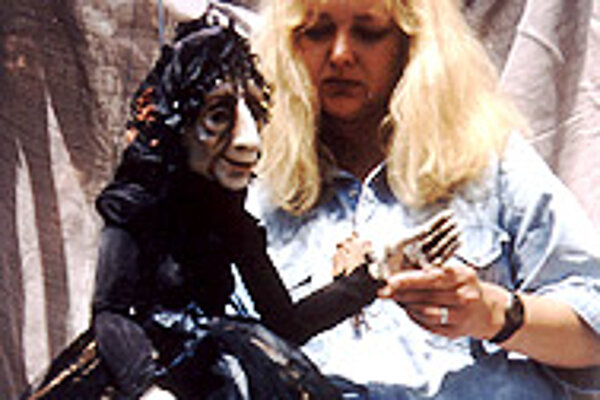 Font size:A-|A+
BORN in Bratislava, puppet designer and woodcarver Alena Malíčková was never taken to the Bratislava Puppet Theatre at Dunajská as a child. She first entered it after she grew up - in 1985, as its employee - and stayed. Most of the puppets that children see today at the theatre are hers.

But soon the 51-kilo woman with tiny hands, as she describes herself at that time, fell so much in love with carving that basswood became an inextricable part of her life. Her works can these days be found at puppet museums and private collections inside and outside of Slovakia's borders.

A few of the over 20 puppets that went on display at the end of September are already missing, as some of them are for sale. There are kings, queens, witches, wizards, and other fairy tale figures arranged in four scenes and hanging from the walls, accompanied by photographs capturing the work's details. The simple clothes the sculptor makes herself but the theatre tailor, Milada Dúhová, sews the complicated ones.

Before entering the wooden part of The World of Fairy Tales exhibition, though, one has to walk through a jungle of foam-plastic animals from the Jungle Book story.

"Tell the children, when they come here, not to touch anything," says Marcela Némethyová from the Dúbravka House of Culture. "It's impossible. And they all keep asking me 'when are you going to start the performance?'"

Apart from the wooden and foam-plastic puppets, also exhibited are wooden statues of witches, and the famous, recently deceased comedian Július Satinský, whose auction price had increased from Sk15,000 (€363) to Sk20,000 (€484) by the time The Slovak Spectator went to print.

The statue of Satinský shows that Malíčková can carve not only imaginary but also real faces into wood.

From a photograph of a person's face and their whole figure, she has carved several people out of wood, mainly directors of companies who have received their statues as a present on their anniversaries. It takes her almost a month to do it, and the work, up to 75 centimetres, costs around Sk10,000 (€242).

"It was more than ten years ago that I finally started creating what I wanted. And when one starts working with wood, it's impossible to stop. I couldn't imagine being without wood," Malíčková says. While others read newspapers while sipping their morning coffee, she grabs a wooden head or leg and carves into it until she has to go to work.