THE FIRST thing that strikes those who enter the house of one of Slovakia's foremost modernist painters, Ernest Zmeták, is the strong smell of paint and richly framed paintings by classicists. It has been over a half century since the 84-year-old painter fell in love with collecting art. And this eagerness has not left him to this day.
What has started to concern him, however, is the future of his collection. 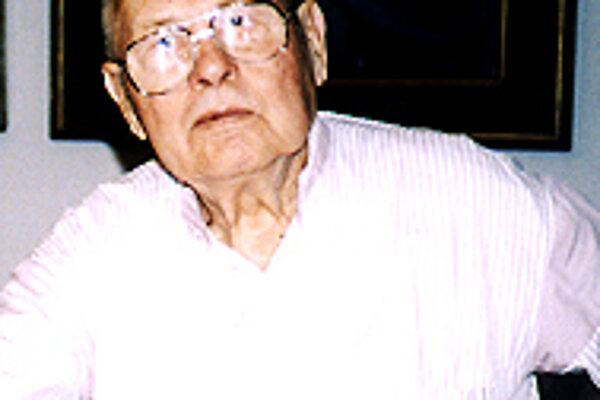 Font size:A-|A+0
THE FIRST thing that strikes those who enter the house of one of Slovakia's foremost modernist painters, Ernest Zmeták, is the strong smell of paint and richly framed paintings by classicists. It has been over a half century since the 84-year-old painter fell in love with collecting art. And this eagerness has not left him to this day.

What has started to concern him, however, is the future of his collection.

Some twenty years earlier, Zmeták and his wife, art historian Danica Zmetáková, decided to dedicate their art collection to the artist's hometown of Nové Zámky. Almost one fourth of the collection was displayed to the public in 1978, and two years later, the collection became part of the newly founded Nové Zámky Art Gallery (GUNZ). However, up to now, the town has failed to move the gift into a representative place or, as Zmeták and the town's representatives originally agreed, build a new gallery space in which to exhibit the rare works.

"I wanted to open a gallery in my hometown because I wanted to help the town. There was nothing," said Zmeták.

"During these 20 years, however, [the town representatives] haven't built any gallery, though they managed to build six new sport playgrounds," he said with a bitter laugh. "I am slowly giving up on the idea of seeing my collection exhibited in full and at a dignified place."

The collection that Zmeták and his wife donated to Nové Zámky consists of around 1,200 paintings, drawings, graphic works, sculptures, glass and porcelain artefacts, and period furniture from the 18th to 20th century. Overall, its value is tens of millions of Slovak crowns.

Currently, the gallery only exhibits a fraction of it, up to 100 of the most significant works; the rest is hidden in the gallery's deposit. The exposition space, which is one room in the Town Council, allows for the display of only one third of the 300 artistic works originally displayed. The reason is simple - contract termination at the gallery space.

"You came at the most unsuitable time," GUNZ director Magdaléna Klobučníková told The Slovak Spectator when it visited the gallery on September 12. "We are just moving to a new building. Only a torso remains of the previous space, and the interiors of the new exposition space will be not finished until the end of 2003."

The gallery has resided at a leased space in the building of the Town Council since 1980. With the town's growth in the second half of the 1990s, though, the town's representatives looked to cancel the rental contract with the gallery, and thus the previous three-room exposition space was gradually reduced to one.

In 2001, the representatives of Nové Zámky found a new building for the gallery on Björnsonova Street. After its reconstruction, which is scheduled for completion by the end of 2005, the gallery will finally have its own space.

In 2004 the gallery plans to reinstall the exposition of the Zmetáks' gift. Works by 19th and 20th century Slovak and Hungarian artists, which have been sitting in a depository since last autumn, will be together with the already exhibited central European art of the 18th and 19th centuries in a new exposition. The permanent exposition will thus grow to its original number of 300 exhibits. However, the other hundreds of works of the collection will remain locked in a depository, hidden from the eyes of visitors.

"It's impossible to exhibit the [Zmetáks'] gift as a whole," said Klobučníková, who has been the gallery's director for over six years, apart from the years between 1996 and 1999. "All key paintings, sculptures, and some other art works from the collection should be represented in the exposition. From the graphic works and drawings, we plan to prepare special sets for temporary exhibitions.

The problem with the collection, though, does not end with the exposition space. Zmeták also worries about the works kept in the depository, which, he says, receive inexpert treatment.

During a brief visit to the depository in 2001, he claims that he found two of the works "very seriously" destroyed. He also pointed to harsh restoration of the older works, and criticized the practises of the gallery's current director concerning the access to the depository and the staff responsible for the gallery in general.

"All managers of the gallery have treated me without respect, despite the fact that the deed of gift instates me as a life-long honorary director of the gallery. Everything concerning the collection should be negotiated with me. This, unfortunately, has not happened once in the past 20 years," Zmeták said.

One such example, he says, was when filmmakers from Hungary came to make a film about his professor, Vilmos Aba-Novák, and the GUNZ director refused to open the depository, where there were several of his paintings they wanted to film, as the filmmakers came unannounced. Another case was when the director of Szombathely-Képtár gallery, Zoltán Gálik, wrote Zmeták that he would like to exhibit the whole collection in his gallery. The GUNZ director suggested, allegedly without discussing it with Zmeták, the exhibition of only the drawings and graphic works.

"I didn't want to make a gallery for myself, which means that I didn't want to present my work there. The collection is my admiration of the art of others. But while I collect these works, they destroy them with absolute incompetence."

According to those who have been watching this long-lasting struggle, the case reflects the state's attitude towards art in general. The ongoing complexity of laws, duties, and the switching of responsibilities, during which the competent people either had tied hands or were uninterested in solving the matter, has led Zmeták to rethink his donation.

In 2001, Zmeták wrote an open letter to then culture minister Milan Kňažko, asking him to provide a quality audit of the gallery's depository, as well as help find a dignified place for the gallery. In it, Zmeták threatened to back out of the deed of gift and move the collection elsewhere, maybe even abroad, if Kňažko does not satisfy these conditions.

"They treat me with less-than-human dignity [at the gallery]," he said in the letter, calling his dream of wanting to open a gallery in his hometown "my foolish dream over which I can today cry a requiem".

Zmeták says that he has been unsuccessfully demanding the general audit of the gallery up to this day. "They are not willing to do it and they blame it on money."

The painter is convinced that the attitude of the state's highest representatives, none of whom has offered him a helpful hand, also casts a negative signal abroad, since "[the conflict] is not only about the culture of the town of Nové Zámky, but of the whole region and country".

The Culture Ministry has informed The Slovak Spectator that the current minister of culture, Rudolf Chmel, replied to another of Zmeták's letters, in which he stated that "the ministry has enforced its competence towards the GUNZ in the past, while neither the alleged defects in the expert report on the collection, nor the radical violation of the deed of gift's conditions were confirmed".

The minister repeatedly asked Zmeták to acknowledge that it is not the ministry that operates the GUNZ, but the Nitra Regional Unit, which became its administrator in April 2002 after the country was reorganised into regional municipalities. Before that it was the town of Nové Zámky that ran the gallery. Chmel also emphasized that the gallery is going to receive a new, representative gallery space, and that the gallery continuously restores the works in the collection using donations provided by the Pro Slovakia fund.

The Nitra Regional Office (ÚNSK) refuses to accept Zmeták's accusations that the donated works are inadequately controlled and incompetently restored, and that some of them were destroyed.

According to the representatives of the ÚNSK culture department, the physical condition of the donated works is marked by time and the unsuitable conditions in which the gallery has been located. Documentation of the art works has been kept since the time the gallery received the gift.

"A survey of the physical state of the works has been provided several times. Maestro Zmeták, however, has never been satisfied with the results," says the ÚNSK statement.

"Preservation and restoration of such a rare collection of art works is a very demanding financial issue, which the state budget does not consider for the GUNZ or for other such organisations."

Will better times ever come?

The state, municipal office, and the gallery, on the one hand, unanimously showcase their intention to treat the artist's gift in the best possible way, within their financial limits. Zmeták, on the other hand, criticizes their practices. Both sides complain of failed communication, and both realize their situations. A consensus, though, has not seemed to come.

While Zmeták regrets donating the gift to a state gallery, the gallery realizes what it would mean to lose it.

"If Mr. Zmeták withdrew the gift, it would be the beginning of the gallery's end," said Péter Molnár, the head of the ÚNSK's culture department.

"The collection belongs to the town," said Klobučníková. "It's also because of this gift that tourists come to visit Nové Zámky."

PAINTER Ernest Zmeták was born on January 12, 1919 in the southern Slovak town of Nové Zámky. Between 1938 and 1943 he studied the legacy of 14th century Italian painting in Budapest under professors Vilmos Aba-Novák and Béla Kontuly. In Slovakia, Zmeták joined the movement started by the most significant representative of Slovak modernism, Ľudovít Fulla, which drew inspiration from Slovak's traditional and folk-art heritage.

During 1946 and 1949 he systematically devoted his attention to graphic art, especially woodprinting. With this technique, Zmeták illustrated several books, mainly collections of ballads, poems, and fairy tales. In the late 1960s, after a study trip to Italy, he started working on mosaic works. Examples of such works are on the tympanum of the Primate's Palace in Bratislava, and on one wall of the Grand Hall of Bratislava Castle.

Zmeták has participated in tens of individual and group exhibitions at home as well as abroad, and his works can be found in private collections around the world. He studied and worked in Italy, Greece, Yugoslavia, Hungary, Iraq, and in several Slovak municipalities. Currently he works and lives in Bratislava.