FULFILLING the expectations of analysts who describe Slovakia as a new investor Elysium, parliament passed one of the key bills of the Prime Minister Mikuláš Dzurinda team's tax reform. The bill introduces a flat 19 percent income tax as of next year for individuals and corporate entities.
Along with the ruling coalition deputies, part of the opposition supported the bill. 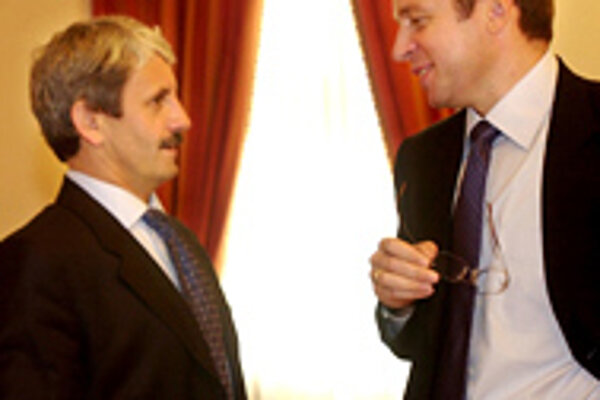 Font size:A-|A+
FULFILLING the expectations of analysts who describe Slovakia as a new investor Elysium, parliament passed one of the key bills of the Prime Minister Mikuláš Dzurinda team's tax reform. The bill introduces a flat 19 percent income tax as of next year for individuals and corporate entities.

Along with the ruling coalition deputies, part of the opposition supported the bill. Of 138 deputies, 85 voted for the bill, including opposition Smer's Róbert Kaliňák and his colleague, economist Maroš Kondrót, who later said they only mistakenly favoured the bill, which was massively criticized by their mother party.

Finance Minister Ivan Mikloš said that the bill would fundamentally improve the business environment in Slovakia and increase people's motivation to work. He also expects tax evasion to drop and the influx of foreign investments to Slovakia to rise.

"The tax reform is directed towards the creation of a fair, simple, and investment-oriented tax environment in the Slovak Republic," Finance Minister Ivan Mikloš told The Slovak Spectator.

He is optimistic that there will be a significant inflow of foreign investments in the future, despite the new law's abolishment of all tax incentives for foreign investors contained in the current income tax law.

The Finance Ministry upholds this step because European Union officials regard tax incentives as not allowable state assistance. The ministry is confident that a favourable 19 percent income tax rate is attractive enough for investors.

Mikloš is certain that the public will notice the positive effects of the reform during the current election term.

The new tax reform, along with the flat tax rate, also increases the non-taxable portion of citizens' incomes to 19.2 times the subsistence level, valid from January 1 of the relevant period, which for next year will be Sk80,832 (€1,952), news wire SITA reported.

According to the current income tax law, income in Slovakia is taxed at a rate depending on taxable income and on whether the taxpayer is a corporate entity or a private individual. In general, it raises the tax rate proportionally to income level.

The flat tax rate is one of the least unpopular parts of the tax reform, which has been heavily criticized by the opposition and trade unions, who have dubbed them a service for the wealthy. Overriding President Schuster's veto of the tax bills in mid July, the parliament raised the excise tax on selected goods. This move was considered rather repugnant by part of the business community and the unions. The reforms also include a unified 19 percent VAT rate on all goods and services from the beginning of next year.

President Schuster, who just recently vetoed a fundamental bill pertaining to the country's pension reform, must still sign the flat 19 percent income tax law. When refusing to sign previous tax laws, Schuster claimed that the increase in excise taxes and the unification of VAT rates should be gradual and sensitive to the socially weak.

Analysts say that tax systems around the world inevitably tend to grow in complexity along with the need to incorporate new provisions aimed at dealing with international business. However, the mastermind of the Slovak tax reform, Mikloš, says it will bring transparency and simplicity to the system.

The government also hopes to slash tax avoidance opportunities. The grey economy accounts for 12 to 15 percent of the gross domestic product, while tax evasion makes up a considerable part of its losses.

The new bill cancels the per-child deductions from the tax base, which will be replaced by a monthly tax bonus of SK400 (€9.7) per child, deductible from the tax duty.

Tax reform plans have been well received by the international business community and also praised by the Organisation for Economic Cooperation and Development (OECD).

General secretary of OECD Donald Johnston said: "This reform is very important, and OECD will monitor its development very closely." He applauded the unification of the taxation of businessmen and citizens, which make the reform appealing to foreign investors.

The International Monetary Fund (IMF) was also rosy about the recent economic development and tax reforms in this post-communist central European country.

Marta Ďurianová contributed to this report.