Until it burns, why care?

A MAN prays in a mosque. A fully veiled woman and her daughter beg on the street. Two little children ride a donkey in a rocky landscape. A group of men discuss some kind of business in public. These are faces of the Middle East.
These are also photographs that will be exhibited at the ic.sk Filmclub, along with detailed explanations. The cinema will be one of the three venues that will hold the One World festival from November 5 to 9 in Bratislava. 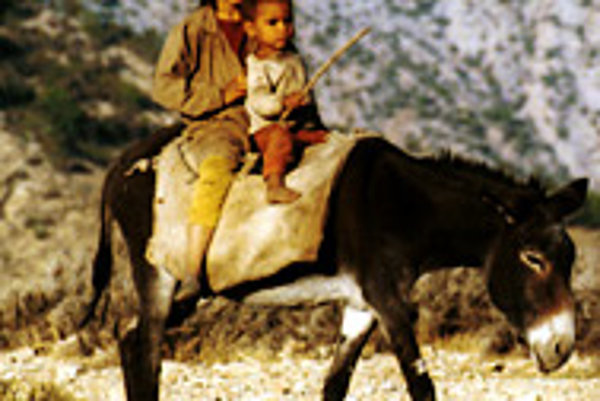 Font size:A-|A+
A MAN prays in a mosque. A fully veiled woman and her daughter beg on the street. Two little children ride a donkey in a rocky landscape. A group of men discuss some kind of business in public. These are faces of the Middle East.

These are also photographs that will be exhibited at the ic.sk Filmclub, along with detailed explanations. The cinema will be one of the three venues that will hold the One World festival from November 5 to 9 in Bratislava.

Taken by Břetislav Tureček, a Czech photojournalist for the Právo daily, who points his camera away from cities and towards the life lived by tens of millions of people in Afghanistan, Iran, Kurdistan, and Pakistan, the pictures show the areas that will be most featured at the festival.

"Since the attack on New York's Twin Towers [on September 11, 2001] the themes of Islamic nations have come into focus. The core of the festival is thus created by the films that map the everyday reality in the middle-eastern regions," said René Lužica, the festival's programme officer.

The 4th international festival of documentary films on human rights, One World, will screen 61 films introducing 30 countries. The films, reporting on and analysing various conflicts and violations of human rights, will be shown in their original language, which is most often English, with Czech subtitles.

Apart form the ic.sk Filmclub, the festival will also run at the Czech Centre and the University Pastor Centre in Mlynská dolina.

The festival, as a partner event of One World - Prague, is organised by the People in Peril (ČVO) non-profit organization. It was started in order to bring tolerance and human right abuses to light, as organisers felt that most of the media in these countries do not sufficiently cover such issues. After Bratislava, the festival will travel to other Slovak cities.

This year's film selection is split into seven categories according to the captured themes.

The section Women's Burdens will not only present women on the screen but also behind the camera. One such filmmaker, Ziba Mir-Hosseini, an Iranian anthropologist living in London, will come to the festival to hold a public discussion on Islamic rights and family issues. Last year, the festival showed her film Divorce Iranian Style.

A new section that the festival will present this year is the Visegrad Documentary Film Fund - a collection of films made since 1990, after the era of communism finished in the region of central Europe. The films capture the impacts political changes have had on people's everyday life.

"This category exists because western European and American documentaries overshadow other documentaries. There has always been a lack of films from central and eastern Europe," said Lužica, who is also an ethnographer and documentary filmmaker.

Other novelties at this year's festival are an Audience Award for Best Documentary and ČVO's Vox Humana award for the humanitarian act of the year by a Slovak citizen.

"[The latter award] is aimed to advertise the deeds of these [humanitarian] people, as well as to bring them out of anonymity," said Lužica. He explained that there exists a selfish mentality in Slovakia, according to which "conflicts too far beyond borders don't concern people until they burn at their feet." "We are very human towards ourselves but inhuman towards others. [The award] is aimed at seizing the conscience of such people and showing that there are also individuals who selflessly help others," he said.

Lužica, who learned about the festival's first year in a magazine and travelled to the Czech Republic to see it, has always been interested in this issue and has tried to help. But, he says, it is not often that a documentary filmmaker or a journalist reporting in a crisis area becomes an aid worker.

"There are two groups of people: Those who take it too professionally and somehow such situations don't have any effect on their psyche, and those whose feelings are touched and they start to feel they have to do something."

"But there are far fewer of those belonging to the second group, as they also have to sacrifice something to do so. However there are some - like Andrej Bán [the photo-journalist and the chairman of ČVO, who once said that 'it's not enough for me just to inform']."