The sound of cello

THE LARGE Hall of the Slovak Philharmonic is overcrowded with the public. This time, on October 21, the stage is given to young Slovak talents, participants in the International Summer Academy Prague-Vienna-Budapest.
Singers, pianists, violinists, and others replace one another on the stage. The last piece is the Sonata for Cello and Piano by the Slovak composer Vladimír Godár. 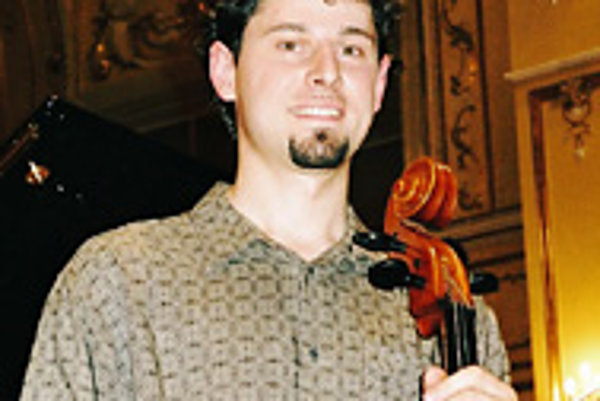 Font size:A-|A+
THE LARGE Hall of the Slovak Philharmonic is overcrowded with the public. This time, on October 21, the stage is given to young Slovak talents, participants in the International Summer Academy Prague-Vienna-Budapest.

Singers, pianists, violinists, and others replace one another on the stage. The last piece is the Sonata for Cello and Piano by the Slovak composer Vladimír Godár. Cellist Teodor Brcko and pianist Monika Mockovčáková perform the dramatic and expressive music with full dedication and in perfect harmony with each other. The hall is invaded by powerful and hypnotic sounds.

Only after the concert does 27-year-old Brcko confess that this was the first time he played on the big stage of the Slovak Philharmonic as a soloist. Was he nervous? "Not really," he shrugs his shoulders. "I was so concentrated on the music that I forgot to fear anything."

Sipping coffee in the Bratislava historical centre, Brcko starts talking about his music studies. "My first teacher, Bohuslav Pavlík, who introduced me to cello, was convinced that it was necessary to give public concerts every month. So, my first concert really took place one month after I first touched the instrument - I was playing open strings and singing. At that time, I had a great fear of the stage. I felt like I was in a dream, not really remembering what happened. The only possibility of waking up was by making a mistake or finishing playing," Brcko laughs.

By now, Brcko has learned to only concentrate on his playing during concerts and forget about the rest.

The young musician comes from the central Slovak town of Martin. His mother loved playing piano so much that even after her parents disapproved of her joining the conservatory, she continued self-studies. This passion for music was inherited by her children: Brcko's elder sister also plays piano.

Brcko himself showed his interest for music quite early. At the age of four, he used to play kitchenware as if they were musical instruments. But when it came time to choose his instrument, selecting the right one was not as clear as it might have seemed. Having two pianists at home, young Brcko knew one thing for certain - piano was not for him.

When his mother brought him to a violin class at Martin's Elementary Art School (ZUŠ), teacher Pavlík introduced Brcko to various string instruments. Soon the choice was made: cello.

"After five years of studies, I was playing better than my teacher," smiles Brcko. "Pavlík was a violinist. He perfectly understood cello as well, but he did not really practice it. He was a great teacher, and I am very grateful for his support and care. I was able to make fast progress also thanks to my mother, who always supervised my studies at home. She made sure that I played every day. Without her, I would never have become a professional musician."

After graduating from ZUŠ, Brcko joined the cello class of Květa Glasnáková at the Žilina Conservatory.

"The best discovery of that time was the cellist Jozef Podhoranský and his music interpretation," says Brcko. "I heard him a few times and I became totally fascinated with his art.

He played as if he narrated a story full of dramatic and emotional collisions, which was very interesting to follow."

Brcko was so attracted to Podhoranský's artistic personality that he even went to see him in Bratislava, where Podhoranský was a professor at the Music Academy. Brcko played for him and asked for his advice. After Brcko graduated from the Conservatory, Podhoranský took the young cellist into his class at the academy.

"First of all, my professor helped me to create a solid technical base; then we worked a lot on musical expression, refining every detail. [Podhoranský] didn't make a secret out of his methods, and during his lessons, there were always a lot of students and teachers in our classroom. He also stimulated me to learn from other schools and professors. That's probably why I participated in so many master-classes after graduating from the Academy," Brcko says.

The year 1999 was very special for the young musician. He graduated with an honour degree and was awarded a special prize from the rector of the academy. The scholarship he won enabled him to travel to Bern, Switzerland for postgraduate studies. The same year, Brcko participated in two international music competitions - of Ludwig van Beethoven and of Bohuslav Martinů in Prague, winning two prizes.

"I don't like to participate in such events," explains Brcko. "An atmosphere of comparison and competition is not for me. Obviously, it also requires hard work on a programme and improving one's musical skills, which is very inspiring, but I prefer festivals, where musicians come just to perform and enjoy music."

Brcko spent four years in Bern studying at the High School for Music and Theatre with professor Peter Hörr. "At the beginning, it was difficult - I knew nobody and received very little money. So, I was obliged to work and to study at the same time. Later I got to know more people.

Two other young musicians and I formed a piano trio. We were chosen by Migros [a network of commercial centres] to perform at some cultural projects, and it was very interesting - we worked intensely on new programs and gave concerts all over the country."

There were also concert trips outside Switzerland. Brcko participated in such international events as the Festival de Divonne in France, the Festival of Chamber Music in Italy, and the Festival of Young Interpreters in Austria.

"The most interesting music event I have ever participated in was the World Cello Congress at Towson University in Baltimore, USA," says Brcko.

"For the whole week, there was nothing but cello music. Hundreds of cellists from all over the world came to the congress to give and to enjoy concerts. There were many discussions, meetings, and master-classes. I had the opportunity to work with Japanese professor Tjutsushi Tsutsumi, whom I knew from my previous visits to Netherlands."

After so many years studying and performing abroad, Brcko returns home. On November 4 he will play in the Hall of Mirrors of the Primate's Palace in Bratislava, at a concert given by young musicians within the program of the Shengen-Bratislava European Music Academy.

"Twenty-five years ago, when this orchestra was just starting its activities, my professor Podhoranský played as a soloist during their first concert. It's a great honour for me to inaugurate this, even more so because this is the year of the orchestra's 25th anniversary."