A BLUES enthusiast and leader of the Slovak band Bluesweiser, Juraj Turtev has been the MC for the Czech TV series Blues from Stará Pekárna for a year. In that programme he introduces English-speaking blues musicians to Czech and Slovak viewers.
Last month he talked to the Canadian guitarist Marty Hall. And this month, the Europe-touring musician comes to let out his blues at a handful of clubs and festivals around Slovakia. 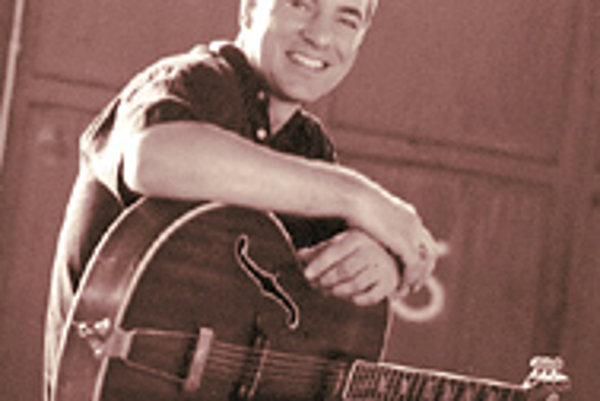 Font size:A-|A+
A BLUES enthusiast and leader of the Slovak band Bluesweiser, Juraj Turtev has been the MC for the Czech TV series Blues from Stará Pekárna for a year. In that programme he introduces English-speaking blues musicians to Czech and Slovak viewers.

Last month he talked to the Canadian guitarist Marty Hall. And this month, the Europe-touring musician comes to let out his blues at a handful of clubs and festivals around Slovakia.

"The first time Marty played here was last summer, at a concert during the Sigord festival in Prešov. That festival introduced him to people here, and this time he is coming to tour the country," said Turtev.

According to critics, the guitarist and vocalist Hall is one of the best, most unique blues musicians in Canada today.

"He is not oriented towards any one style," said Turtev. "He draws inspiration from all styles of blues and beyond. His voice is nicely coloured, and his guitar playing is very distinguished."

In his life, as well as in his music, Hall seems to erase borders. Born in Canada and living in Germany for a while, he is currently staying in the Czech Republic, where he plays in a duo with Pavel Malina.

Last year he issued his sixth album, Hidden Key, which he is currently promoting during his 2003 October/November European tour. "It's a very versatile blues record," Turtev says, which apart from Hall's songs, covers versions of Johnny Winter's Take One Step at a Time and Kiss Tomorrow Goodbye, the "blues classic" Good Morning Little Schoolgirl, and the rock-driven Rick Derringer's Rock & Roll Hoochie Koo.

"The true face of Marty's honest soul can be fully experienced in his own songs. They flow as a one wave message - strongly, mindfully, and gently, with sensitive support from all the involved musicians," said Turtev. He, the harmonica player Erich Boboš Procházka, dobro guitarist Ľuboš Beňa, and Hall will perform a live concert before an audience for Radio RockFM on November 9 in the concert hall of Slovak Radio.

The dobro player, Beňa, will accompany Hall at all Slovak dates on his tour. Beňa plays steel body Amistar guitars, and with his singing and rhythmical footstomping, he creates a sound that resembles the old bluesmen from the Mississippi Delta.

Hall's first Slovak stop will be in the western Slovak town of Skalica. The last will be in Levice, where the Canadian guitarist will be accompanied by his countryman, Butch Coulter, who is one of the world's best blues harp players.

The most important event of Hall's Slovak tour will be the 3rd Folk-Blues Sessions in Bratislava, on November 8. Apart from him, the festival's evening will also feature the Dutch follower of traditional acoustic blues Hans Theessink and US jazz-rock-folk guitarist Eric Wood.

"Which one of them is the festival's headliner?", Turtev asked. "Well, it's as if you had three good beers and you had to choose one.

"But personally I like Marty the best. There are no stylistic limits in his blues playing... I feel very relaxed with his music." >P17

THE SECOND annual Nu Jazz Dayz, an indoor festival presenting a style of music called new jazz, a combination of live and electronic music, will take place on November 6 and 7. It will start at 20:00 with the band Veneer from Trnava, a five-member group that remixes tracks by other musicians, such as Lenny Kravitz. Among other bands will be the British groups Neotropic and The Bays, and Austrian performer Tom Wieland. The next day, also starting at 20:00, the Slovak bands Dlhé Diely, B3, and Kinet Magálová, and the British performers Akasha and Mr Hermano will hit the stage. The festival will take place at the Babylon Club, Karpatská 2 in Bratislava. Tickets cost Sk380 for one day and Sk590 for both days. For more information call 02/5556-3214.