THE AUTHORS of a controversial report on the illegal sterilization of Roma women in eastern Slovakia said that the matter was far from being closed after the cabinet's investigations into the allegations found that no genocide had taken place in Slovakia.
The Slovak cabinet recently discussed a report submitted by Deputy PM for Human Rights Pál Csáky that stated that illegal sterilization of Roma women had not taken place.
However, summarising an investigation that lasted months, the report stated, "all administrative procedures were not always adhered to" during individual sterilizations. 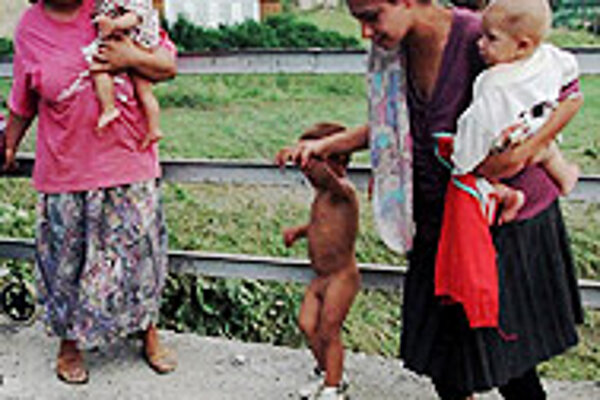 Font size:A-|A+
THE AUTHORS of a controversial report on the illegal sterilization of Roma women in eastern Slovakia said that the matter was far from being closed after the cabinet's investigations into the allegations found that no genocide had taken place in Slovakia.

The Slovak cabinet recently discussed a report submitted by Deputy PM for Human Rights Pál Csáky that stated that illegal sterilization of Roma women had not taken place.

However, summarising an investigation that lasted months, the report stated, "all administrative procedures were not always adhered to" during individual sterilizations.

It therefore recommended that Slovak legislation on sterilizations be changed so that no doubts could arise in the future over the lack of the informed consent of women to their sterilization.

In January this year, the New York-based Center for Reproductive Rights (CRR), a non-profit organization that promotes and defends the reproductive rights of women worldwide, and the Slovak Centre for Civil and Human Rights (POĽP) non-profit advocacy group, released a report called Body and Soul that documented 110 cases of Roma women who were sterilized against their will in public hospitals in eastern Slovakia

It also exposed other violations of Roma women's rights, such as verbal and physical abuse, segregation in maternity wards , misinformation in health matters, denial of patient access to medical records, and other racially discriminatory standards of care.

The allegations caused a massive stir in Slovakia and abroad. EU officials, human rights organizations, and members of the US congress expressed concern over the allegations. The Slovak cabinet launched a large-scale investigation into the matter through the Health Ministry.

Police undertook a separate investigation under the suspicion of genocide by unknown perpetrators.

In late October, Csáky's report stated that the allegations were not confirmed.

"[The] Slovak cabinet considers this issue and this case a closed matter," Csáky said on October 29.

As part of the report, a cabinet statement was approved condemning all forms of intolerance and racial hatred. But the authors disagree with the cabinet's conclusions.

"It was positive to see that the cabinet launched the investigation, but the way the investigation was carried out raised doubts about the cabinet's willingness to reimburse the victims and punish the actors [of coerced sterilization]," Barbara Bukovská from POĽP said to The Slovak Spectator.

According to POĽP and CRR, investigators intimidated Roma women throughout the investigation.

EU officials were not completely convinced by the cabinet's findings.

Alvaro Gil-Robles, the Council of Europe's Commissioner for Human Rights, suggested, in a statement issued on October 29, that the Slovak cabinet should accept "objective responsibility in the matter for failing to put in place adequate legislation and for failing to exercise appropriate supervision of sterilization practices, although allegations of improper sterilizations have been made throughout the 1990s and early 2000s".

Csáky disagreed with the comments.

In a November 4 interview with The Slovak Spectator he said, "in no case can we agree with such a statement".

"Illegal sterilizations did not take place in Slovakia and so there is no failure to admit or take responsibility for something that did not take place. There really is not a reason to doubt the results of the investigation," Csáky said.

Gil-Robles' report stated that "in view of the difficulties encountered during the investigations, and limitations surrounding them ... it is unlikely that they will shed full light on the sterilization practices".

It also said that "it can reasonably be assumed that sterilizations have taken place, particularly in eastern Slovakia, without informed consent," although the commissioner said that it was never confirmed that an active or organized government policy of improper sterilizations has existed.

EU ambassador to Slovakia Eric van der Linden told The Slovak Spectator on November 3 that his delegation in Bratislava had not yet received a copy of the cabinet's final report and he therefore could not comment on it.

"I do not doubt that the cabinet has made an in-depth examination, but I am convinced that here and there such a case has happened. But I must underline that I am also convinced that it has not been the government's policy but the acts of individuals," Ambassador van der Linden said.

Bukovská said that the victims would continue to seek legal redress in their individual cases.

"The matter is certainly not closed. Some of the women are filing complaints against the investigation and they are determined to go to the Constitutional Court with their complaints, as well as to the European Court [of human rights] in Strasbourg," Bukovská said.

The Slovak Constitutional Court is the highest court institution in the country that resolves legal disputes and also rules in cases where parties complain that their constitutional rights to a fair and objective trial were violated.

Apart from introducing new legislation that would make sure no future sterilizations are carried out without a patient's informed consent, Gil-Robles said, the Slovak cabinet "ought, consequently, to undertake to offer a speedy, fair, efficient, and just redress".

"The redress should include compensation and an apology," he stressed.

Csáky responded, "if we are to take the word redress then it would only be in the sense of approving new legislation dealing with the terms under which sterilizations are carried out".

"The terms will be much stricter as opposed to the current situation. That, however, does not mean that in Slovakia a process of illegal sterilizations took place, but rather that we will adjust our legislation in this area to a more modern system of perception of this issue," Csáky said.