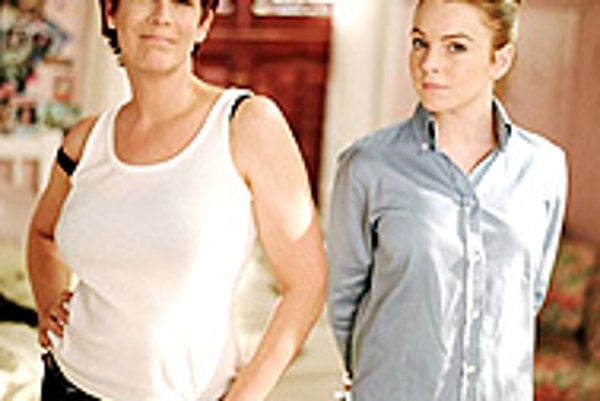 THE TITLE Freaky Friday immediately suggests low budget teen horror. The fact that the film stars that genre's matriarch, Jamie Lee Curtis, only adds to this possibility. Suddenly, something far more horrifying is acknowledged: yet another Hollywood remake for the mobile phone/Britney Spears (or in this case, Avril Lavigne) set.

Too often, remakes indicate a lack of ideas: The creators simply put a modern spin on an already proven original, solely due to their inability to create anything better, and thus lose track of what made the original so enjoyable.

Miraculously, Freaky Friday, a new version of the 1976 Disney classic, avoids these traps, managing to effectively and convincingly bring this story to the present day. Well, as convincingly as possible for a film in which the central concept revolves around a mother and daughter switching bodies for a day.

Things begin somewhat promisingly, with the opening credits slowly unravelling to the tune of The Turtles' classic Happy Together. Abruptly, the song jumps into an obnoxious pop-punk version by Simple Plan - and things look dismal.

Of course, the film is not without its problems. Unfortunately, it relies on Orientalism to bring about its central premise: the mother/daughter body switch is precipitated by what the mother (Curtis), in the daughter's body (Lindsay Lohman), refers to as "Chinese voodoo", brought about by a magical Chinese fortune cookie.

Freaky Friday's main characters are meant to represent typical middle-class Anglo-Americans, for whom Chinese food and, thus, the wisdom of fortune cookies, represent the extent of their knowledge of Asian cultures. In its simultaneous mocking and celebrating this average modern Americanness, Freaky Friday evades being held fully accountable for such exoticism.

In a way, everyone in the film is ridiculous - perhaps most of all the central mother and daughter. But, though ridiculous, they are never without director Waters', or our, sympathy. This is, after all, a Disney family fable. Waters manages a smart balance between caricatured humour and the requisite sentimentality, without one ever overcoming the other. Though it occasionally overindulges in cliches, the film and its two main actresses, body-switch and all, create a fairly convincing contemporary mother/daughter relationship - dialogue, motivations, conflicts, and actions.

The body switch obviously causes the mother and daughter to appreciate one another, to recognize that the other is, in fact, also a person with her own difficulties and passions. As trite as this seems, the fact remains that parents and children often really do need to realize this. So, why not do so via a film that is so incredibly cute?