Highways are roads to prosperity

THE EUROPEAN Investment Bank (EIB) granted Slovakia a loan of €68 million to finance part of the construction of badly needed highways.
The disadvantage of Slovak regions that lack a top-class road connection is becoming even more visible now that foreign investors, a major source of the country's development, prefer regions with highways, basically the Bratislava region and western Slovakia. The rest of the country suffers from high unemployment and a low living standard.
Observers agree that the fundamental problem of highway construction is certainly the enormous cost. Slovakia's state budget feels literally every kilometre of highway it builds. Every year, the government has to face the same dilemma: increased state debts and a rapidly developing highway network, or low spending and slow construction. 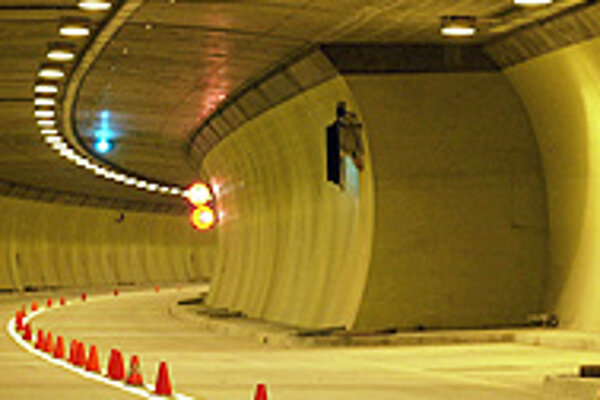 Font size:A-|A+0
THE EUROPEAN Investment Bank (EIB) granted Slovakia a loan of €68 million to finance part of the construction of badly needed highways.

The disadvantage of Slovak regions that lack a top-class road connection is becoming even more visible now that foreign investors, a major source of the country's development, prefer regions with highways, basically the Bratislava region and western Slovakia. The rest of the country suffers from high unemployment and a low living standard.

Observers agree that the fundamental problem of highway construction is certainly the enormous cost. Slovakia's state budget feels literally every kilometre of highway it builds. Every year, the government has to face the same dilemma: increased state debts and a rapidly developing highway network, or low spending and slow construction.

According to Peter Barek, general director of the road infrastructure section of the Slovak Ministry of Transport, Post, and Telecommunications, the construction cost of one highway kilometre on flat ground is, on average, Sk300 million (€7.25 million). Costs for a two-tube tunnel can reach Sk2.5 billion (€60.75 million) a kilometre.

"The financing [of highway construction] from the state budget is too small. The flat value added tax of 19 percent will also have a [negative] impact on the volume of financing," he added.

The EIB loan, with its favourable conditions, should help the government get closer to accomplishing the highway network.

The above-mentioned €68 million is assigned for construction of the highway section Svinia - Prešov in eastern Slovakia, which is part of the priority highway route (D1) connecting Bratislava - Košice - Ukraine, and the section Rudno nad Hronom - Žarnovica (central Slovakia) of limited-access highway (R1). All together the assignment covers 18 kilometres.

EIB vice president Wolfgang Roth, who signed the loan agreement, emphasized that the financing of projects to develop transport infrastructure is vital for Slovakia.

He considers the completion of the east-west (D1) highway connection to be the most important, since many potential investors are interested in running business in eastern Slovakia due to a high amount of unemployed skilled labour. "There is not much of a skilled labour force left in the Bratislava region," he added.

As Vladimír Tvaroška, the Finance Ministry state secretary, said, the EIB loan is extremely advantageous, mainly due to its low interest rate and flexibility. The loan is designed for 15 years with a grace period lasting until the scheduled completion of the project in 2010.

Tvaroška said to the news wire SITA that the total project costs amount to €705 million. Apart from the EIB loan, the construction will be financed by the ISPA pre-accession European Union fund (€160 million) and the state budget.

The only route that is completely functioning today is the shortest one - D4.

The D2 route is almost completed. "It should be ready for transportation needs by the year 2006," said Barek. D3 needs 20 kilometres to be finished.

The state's highest priority is the D1 route, as it is supposed to cross the whole of Slovakia from the west to east. There are still 175 kilometres of unfinished highway on this route.

Unfortunately, the D1 route is not only the longest, but it also runs through very difficult hilly territory. For example, the construction of a tunnel under the Branisko hill in eastern Slovakia, which used to terrify drivers travelling to the west, lasted 6 years and cost Sk9.5 billion (€231 million). The construction lasted 3 years longer and cost Sk2 billion (€48.6 million) more than planned.

"The completion of highway D1 together with D3 is a job for the next several governments," Barek added. Transport Minister Pavol Prokopovič is, however, more optimistic about finishing route D1, at least the part between the two Slovak metropolises, Bratislava and Košice. He hopes the route will be finished by 2008.

Private sources that the Bratislava - Košice project plans to involve in its financing should be helpful. The minister expects to get Sk80 to 100 billion (€1.94 to 2.43 billion) in the forthcoming years from private investors for this.

Dealing with private highway investors and returns on their investments would be the duty of a Highway Company created by splitting the currently state-owned company Slovenská správa ciest (Slovak road administration), responsible for Slovak road networks, halfway through 2004 or in the beginning of 2005.

Prokopovič thinks that the Highway Company, which would collect highway fees, would be able to return the invested money in the project in 20 years time.

Dušan Faktor, the general director of SSC, also sees the year 2008 as a realistic date for completion of the Bratislava - Košice highway. "Foreign capital has an interest in investing in highway construction in Slovakia.

"The important fact is how it will get here. Mainly companies that have experience with this style of financing are interested. I have not said that this would be cheaper, but for sure, it will be quicker," he said for the Hospodárske noviny daily.

However, he continued, "it is not that important whether we connect Bratislava with Košice in 2008 or 2010. The main point is to speed up the whole process of highway construction."

After the Highway Company is established, the stickers will represent an income for the company, and it will decide how the money is to be used.

All the Slovak highways and limited-access highways, once they are finished, will become a part of the European network. The Czech Republic and Hungary have already built their highway connections to the Slovak borders. The Polish highway to Slovak borders is under construction. Austria should finish its part of the mutual interconnection in 2006 or 2007.

"Connection to Ukraine is not that significant from the point of view of the current intensity of mutual transportation, but the place of border interconnection has been already set," said Barek.

The state budget for 2003 allocates Sk8.88 billion (€215 million) for construction of highways and limited-access highways. Next year, state investments in the new highway network should reach Sk8.57 billion (€208 million).