HE IS one of the ten most significant photographers in the world. He was born in McKeesport, Pennsylvania, like pop-artist Andy Warhol, and his family, like Warhol's, comes from Slovakia. At 71 he is energetic and has an amazing sense of humour.
Photographer Duane Michals is participating in the Month of Photography festival in Bratislava for the second time. After a ten-year absence, he came to open a large exhibition introducing a cross-section of his entire work on November 11. On that occasion, Michals also received an honorary doctorate from the University of Fine Arts in Bratislava.
The Slovak Spectator talked to him shortly before his trip to Slovakia. 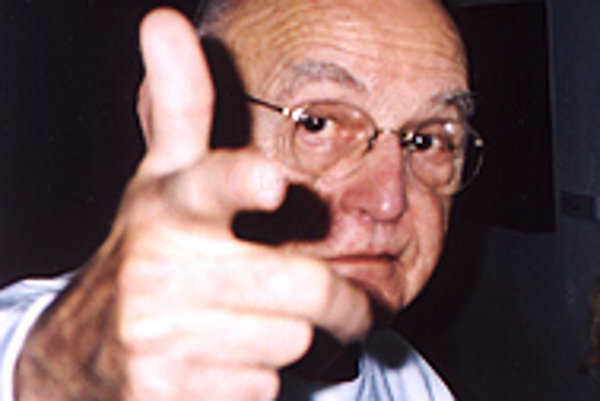 Font size:A-|A+
HE IS one of the ten most significant photographers in the world. He was born in McKeesport, Pennsylvania, like pop-artist Andy Warhol, and his family, like Warhol's, comes from Slovakia. At 71 he is energetic and has an amazing sense of humour.

Photographer Duane Michals is participating in the Month of Photography festival in Bratislava for the second time. After a ten-year absence, he came to open a large exhibition introducing a cross-section of his entire work on November 11. On that occasion, Michals also received an honorary doctorate from the University of Fine Arts in Bratislava.

The Slovak Spectator talked to him shortly before his trip to Slovakia.

The Slovak Spectator (TSS): Having Slovak grandparents from both sides, do you come to Slovakia often?

Duane Michals (DM): No. I was there years ago... I became a photographer by going to Russia in 1958 when I was 26 years old. On the way back, I went to visit my relatives. My grandmother's family from my mother's side came from Červenica [near Prešov], and my grandfather came from some place near Prešov. My other side... I don't know where they came from. Some of my relatives also lived in Košice, but I've lost track of them. I was hoping to fit in a visit to Červenica when I went back [home from Russia] but we only had three days, so it didn't work out. My mother and my father were both born in the United States.

TSS: So, you are the second generation of your family born in America.

DM: That's right. My mother's mother brought me up pretty much till I was about five years old. So, when I was a little boy, I spoke Slovak.

TSS: The University of Fine Arts in Bratislava is going to award you an honorary doctorate for your life's work. What does this mean to you?

DM: I am very pleased. I am very happy about it, and very proud, because I've come sort of full circle, and I'm just sorry that my grandparents weren't around to see this. I think they would have been very proud too.

I am not one of those people who forget their roots, where they came from.

TSS: You were born in the same town as pop-artist Andy Warhol, who also has Slovak roots.

DM:Yes, but I didn't know him until I came to New York. He was about four years older than I was. They had moved on to Pittsburgh by the time he was growing up. But when I met him and his mother, I could understand her and speak to her in Slovak a little bit. So, that was fun.

TSS: How close friends were you?

DM: There was one point where we were good friends, but Andy was the kind of person who was very career-ambitious and very much on the way up. And of course, sometimes when people reach higher circles of friends, they tend to forget their old friends. So eventually, he became unreachable for me, because he had travelled with upscale celebrities.

TSS: You have photographed him. But did he ever paint you?

DM: No, I wish he had. I didn't like his work very much. So, a work he gave me I gave away; which was a terrible thing to do. So much for integrity... [laughs] I was very foolish.

TSS: What kind of pictures did you take of him?

As a matter of fact, the first picture I ever sold was to the American fashion magazine Harper's Bazaar, and it was a portrait of Andy.

DM: I am looking forward to coming to Bratislava. Because I was there a long time ago and I am sure it's nicer now. They were doing a lot of work there in the Old Town, after communism was over. I found Bratislava to be a charming city.

TSS: Have any of the Slovak photographers ever inspired you?

DM: Oh, I didn't know any in those days. No American photographers inspired me either [laughs]. I was my own inspiration; I didn't need inspiration.

TSS: Or, vice versa, have you noticed Slovak photographers taking inspiration from your pictures?

TSS: The Bratislava exhibition is going to offer a retrospective of your work. When you observe its development, from the very beginning until now, what do you feel? What sort of transition has your work gone through?

DM: Well, it was interesting because I am not a very typical photographer. I am not a typical person either [laughs].

I became a photographer when I was 26, which was very late. And I was an amateur; I never studied photography, so I've always been my own person. Because my concerns are more metaphysical and more introspective, I began to deal with issues that are not visible - like life after death, and dreams... Then I began to write with [my] photographs because I found photographs inadequate to express things I wanted to talk about.

And ultimately, I am doing a lot of writing now with photographs. When people ask me what I am, now I say 'I am an expressionist'. It's not about writing or photography or painting; it's about how well you express yourself. Therefore, my concerns have become much more intimate and I never walk around with the camera.

So, I evolved from originally doing portraits, when I went to Russia in 1958, to now - where lot of it is about writing and photography.

TSS: You say that you are most interested in the invisible, the things that cannot be seen in ordinary life.

TSS: How easy or difficult is it to bring these things closer? To catch them in a photograph?

So, I had to write about it, I had to do little movies, little stories... five or six photographs, or just do a text. I am completely free. I can do anything I want to do.

TSS: So, is it because of such themes that you decided to accompany your photographs with texts to describe exactly what you planned to capture in them?

TSS: Once you said that if it weren't for the journey to Russia in 1958, you would probably have never become a photographer. What exactly was it that inspired you?

DM: The trip changed my life. I never planned to be a photographer. I took the camera with me and as a result of taking these pictures I figured out what I should be doing. Most people never find what they should be doing. It's hard to find your 'thing' - the thing you need to do. And once I found photography, then I was completely free.

TSS: So you never thought of becoming a photographer one day.

DM: No, it never occurred to me. I just happened to discover photography by accident, which I think is the best way to discover things.

If I hadn't gone [to Russia] and if I hadn't taken the camera, I would not be talking to you today as a photographer. I'd be a rich rock star. That was my choice in careers [laughs].