FOURTEEN years after the fall of communism on November 17, 1989, Slovakia is nearing the gates of the EU and NATO; yet, according to surveys, many citizens feel sentimental about the old times, with left-wing political representatives fuelling the sentiment. 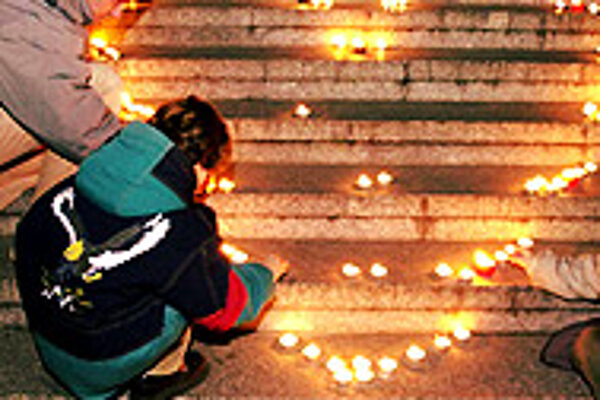 Font size:A-|A+
FOURTEEN years after the fall of communism on November 17, 1989, Slovakia is nearing the gates of the EU and NATO; yet, according to surveys, many citizens feel sentimental about the old times, with left-wing political representatives fuelling the sentiment.

The events that led to the fall of communism and to the Velvet Revolution - a non-violent removal of the communist rule - and the nation's early enthusiasm for public affairs have, according to some politicians, faded away.

There are no surveys available to show what Slovaks think of the events of November 1989, but due to what many perceive as the worsening economic situation, increasingly more people are inclined to say that the communist regime provided more social securities for its citizens.

In response to the ongoing economic reforms that the right-wing cabinet has put in place, left-wing politicians, such as Smer leader Robert Fico, say that although the Velvet Revolution brought civic rights and freedoms to people, these are formal and cannot be exercised.

Fico, just like the parliamentary Communist Party (KSS) officials, also said that the living standards of the majority of Slovaks are lower than they were before the fall of the regime.

KSS central secretary Ladislav Jača dismissed the 1989 events as a "coup" and even questioned whether Slovaks had won any freedom in the revolution.

"We shouldn't celebrate this at all. I might be free, but what is freedom for when the state is unable to provide me any economic securities? Freedom is an imaginary term," Jača said to The Slovak Spectator on November 18.

Marking the anniversary, Slovak President Rudolf Schuster said in a speech that more people should take active interest in politics.

"In November 1989, the majority of people were in the streets. They were interested in politics and many were entering it. Yet the atmosphere of interest soon disappeared."

"I am a bit concerned that November 17 is merely becoming a work-free day," said Schuster, himself a former high-standing communist before 1989.

Yet, despite the fact that left-wing parties generally describe the event as having a negative economic and social impact on the nation, flocks of people gathered in towns and cities around Slovakia in commemoration, lighting candles, which, along with ringing keys, have become an unofficial sign of the November 1989 events.

Political analysts have been positive about the country's development and noted that the difficulties Slovakia has faced since the fall of communism are little different than those of other post-communist nations that have taken up the path of transforming their previous communist economies into free market ones.

Soňa Szomolányi, a professor at the Political Sciences Department with the Comenius University in Bratislava, said: "All transforming states have met with difficulties; that is not something special to Slovakia."

Szomolányi said to The Slovak Spectator that she was disappointed with the presentation of the 1989 events in the Slovak media and thought that it has impacted the perceived lack of information that especially the younger generation has about "what was then and what is now".

President Schuster, however, insisted that Slovakia is due to give more to its weakest inhabitants.

"The socially weak, especially pensioners, pay the most for the economic reforms. Access to education and information is becoming the privilege of the well off; the state cares too little for the rest [of the population], who have the same rights," Schuster said.

While left-wing politicians concentrated on the economic difficulties many Slovaks have faced in the transforming democracy, right-wing politicians and those who were active in the squares 14 years ago stressed that the biggest asset that the revolution has brought to the nation is freedom and democracy.

PM Mikuláš Dzurinda said that the November events brought citizens human and civic rights "and meant a step towards the first free elections after long decades" of communism.

Christian Democrat František Mikloško, who was an active player back in 1989 and has become one of the country's longest serving politicians since the fall of communism, also admitted for the SME daily that November 1989 is becoming a matter of the past for him.

Yet he noted: "It was the biggest experience of my civic life; it cannot get any bigger."