THE BRATISLAVA region will soon be even closer to the Vienna region. Some are even talking about a golden triangle between Bratislava, Brno, and Vienna. The linking of these regions would fuse the heart of Europe, an area that has enormous economic potential, said Konstantin Bekos, the commercial counsellor at the Austrian Embassy in an interview with The Slovak Spectator. 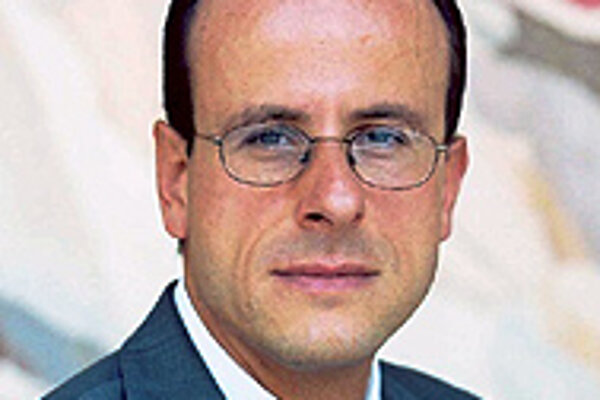 Font size:A-|A+
THE BRATISLAVA region will soon be even closer to the Vienna region. Some are even talking about a golden triangle between Bratislava, Brno, and Vienna. The linking of these regions would fuse the heart of Europe, an area that has enormous economic potential, said Konstantin Bekos, the commercial counsellor at the Austrian Embassy in an interview with The Slovak Spectator.

The Slovak Spectator: What are the main spheres of economic cooperation between Slovakia and Austria?

Konstantin Bekos (KB): Austrians are highly interested in services, and we also have a very strong industrial engagement in Slovakia. Intense Austrian activity can be found in the branches of machinery production and automotive industry supplies. We see considerable potential in tourism. Wood processing, furniture production, and, last but not least, the food processing industry are also within our focus. Slovakia has many excellent products, but some simply do not fit the standards of the EU market. Thus, cooperating on healthy food standards could benefit both countries. Moreover, EU standards will be applied as of May, and all Slovak companies will have to adapt. Implementing these standards requires a great deal of investment and knowledge, and Austria could provide the know-how.

TSS: Austrian investors have established or entered 7 banks in Slovakia (Slovenská sporiteľňa, Tatra banka, HVB, Ľudová banka, Istrobanka, Dexia, and Banka Slovakia). Why are Austrian investors so interested in Slovak banks? What made them the best bidders in the tenders for acquiring these banks?

KB: Actually, the management of each bank you mentioned has considerable experience in central and eastern European countries. They have been present in this region for a long time and are fit to take over companies in the region and quickly bring them to profit. It is not a specifically Slovak matter. It is an interesting phenomenon that you find everywhere. On any new market, you can observe that banks are the first to take over companies, followed by lawyers, who pioneer the networks of economic extension.

Talking about the pioneers, one the first Austrian companies to come to Slovakia was MIBA, a supplier for the automotive industry that started operations in Dolný Kubín 13 years ago. The head of the company, who is also the head of the Austrian Federation of Industry, had a vision for profitability and development in Slovakia.

TSS: Austria is Slovakia's third most important export destination among EU members. Slovakia's trade with Austria has reached a positive balance. In what Slovak product are Austrians most interested?

KB: Slovak-Austrian trade is a very healthy exchange. While the trade on the Slovak side has posted a positive balance, the deficit on the Austrian side is not harmfully large. The structure of this exchange is healthy as well. There is a strong economic inter-relevance and interrelation. Austrians show the most interest in machinery, then semi-finished products, followed by the automotive and chemical sector, along with steel and wood production. In 2002, Austria posted a negative trade balance with Slovakia at €134 million, whereas over the first six months of this year, the trade-balance deficit was €112 million. [For more details see the chart.]

Austrians are also interested in wood processing. It is one of the spheres in which we can provide know-how. We still want to enter the Slovak market in furniture production and wood processing. At the moment, this sector is very unhealthy in Slovakia, as it is dominated by two to three huge producers. Slovakia should perhaps stop focusing solely on being a great exporter of unprocessed wood and instead begin to produce wood products within the country.

TSS: After Slovakia's entry into the EU, foreign labour markets will open up to the country's citizens. Is Austria concerned about the influx of the Slovak workforce?

KB: Yes, it could be a concern for Austrians, who live in a small country and who might feel that the foreign labour force would invade their markets. However, it has always been a shared concern of all the EU member states that now are trying to reorient their industries. Globalisation has driven a lot of companies into investing abroad. Therefore, there is a fear that, on the one hand, companies are going abroad and cutting jobs back home, while on the other hand, foreign labour rushes into the country. I personally do not share this fear. Austrian workers are very productive. We only have to undergo some reorientation. Globalisation has been very healthy for many medium-sized companies that have grown into big companies.

TSS: Has the potential of Slovak-Austrian cooperation been fully explored? What are other forms of cooperation that could benefit Austrian and Slovak business?

KB: The potential has certainly not been fully explored; I would not be here if I did not see even more potential. One of the prevailing problems is the infrastructure, especially the connection to eastern Slovakia. Also politicians in Austria had initially ignored Slovakia's development and did not properly react to the positive changes Slovakia had undergone. Now, however, they are beginning to see that they are losing their chance to profit from this development. New projects have been started to fix these areas. This ignorance of Slovakia's potential also persisted in business circles.

Now, smaller and medium-sized companies are coming to Slovakia. It was a mental iron curtain that has only recently been overcome. It almost seems that the Austrians have just fully realized that as of May, their neighbour, Slovakia, will be part of the European Union.

TSS: Slovakia has committed to finish the Slovak section of the Bratislava-Vienna highway. What is your estimate for the completion of the Austrian part of the highway?

KB: There have been rumours and many time schedules published about the highway construction. The reality is that the construction process cannot be dramatically sped up because it is bound to EU regulations. There will be a Europe-wide tender to select the companies and contractors, which will have to be done within a specially set time period. The project will start between December 1, 2004 and January 1, 2005, and the construction will be completed by 2007. All other information is rumour and speculation.

Certainly, infrastructure is crucial - the veins in this European body. It is not only about building streets and roads, but also about enforcing the modernisation of Danube shipping - interconnecting future EU markets through Slovakia and Austria - to create a trans-European network.

Seeing the enormous influx of Austrian business to Slovakia, it is only logical that Austrian and other air companies are strongly engaging in business in Slovakia. The Bratislava airport, which is serving this golden region we are talking about, will be modernised.