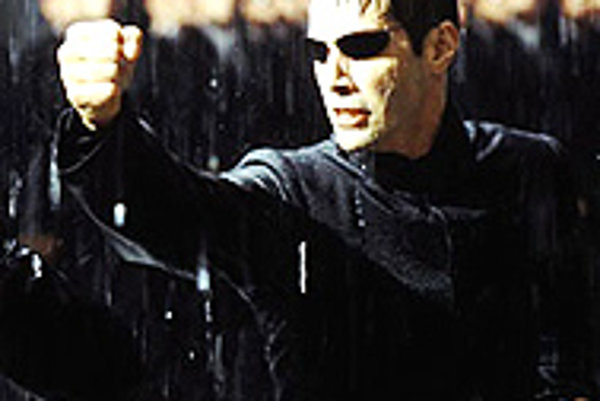 THE MATRIX revolutionized Hollywood. Coming out during the Y2K-fuelled techno-paranoic climate of 1999, the film easily multiplied its relatively modest event-movie budget of $63 million. More importantly, it invigorated its gloomy, philosophical science fiction by capturing the energy and beauty of Hong Kong (HK) action cinema - becoming the first Hollywood effort to successfully do so. It redefined what a glossy action movie could and should look like, thus setting a standard few subsequent films have reached - including, sadly, The Matrix: Reloaded and The Matrix Revolutions.

Matrix directors Andy and Larry Wachowski used their Hollywood budget and the technology it provided to expand upon the photography and action choreography techniques pioneered by low budget HK's finest. The film's remarkable success ensured that they could make another - with an even larger budget. Instead, they decided to make two, each with budgets over $100 million, each with even more advanced special effects and elaborate sets, each with unprecedented box office releases.

Part two, Reloaded, has become the highest grossing R-rated film ever ("R" meaning "restricted" to those over 17 or those with a parent or guardian). Part three, Revolutions, was the largest simultaneous worldwide release in film history. Unfortunately, beyond these facts, parts two and three fail to offer anything approximating the excitement of the original.

Reloaded suffered from too much plot, as the brothers Wachowski focused more on fleshing out the philosophy and character development, which only exposed that these elements were not what ultimately made the original so engrossing. They merely provided the skeleton for a film that was flowing with inventive, kinetic action. Reloaded's action sequences, though elaborate, lacked that radical newness that the original's so unapologetically flaunted.

Revolutions may focus a bit more on the effects, but, as with part II, it fails to capture the spirit of the original. Whereas the increased budget enabled The Matrix to create visuals the HK elite had not even achieved, the resulting budget increase of the next two actually undermined the Wachowskis.

What makes HK action, and in turn The Matrix, so alive is its use of bodies in motion.

Revolutions has two elaborate action sequences, the first of which is a painfully long and boring scene in which the machines try to destroy the humans' safe haven. The final - the rain-spattered showdown between Keanu Reeves' Neo and Hugo Weaving's Mr Smith - is great, and prevents the film from completely faltering.

But, it's too late: in a cruel irony, in the end the Wachowskis themselves are overwhelmed by the very technological breakthroughs they created.