Eastern and western oil routes to be connected in Bratislava

AN OIL pipeline network will connect Slovakia and Austria by 2006.
The Russian oil producer Yukos and the Austrian company OMV recently signed a memorandum of understanding on transporting crude oil supplies from Siberian oil fields to the biggest Austrian refinery, owned by OMV, in Schwechat, near Vienna. 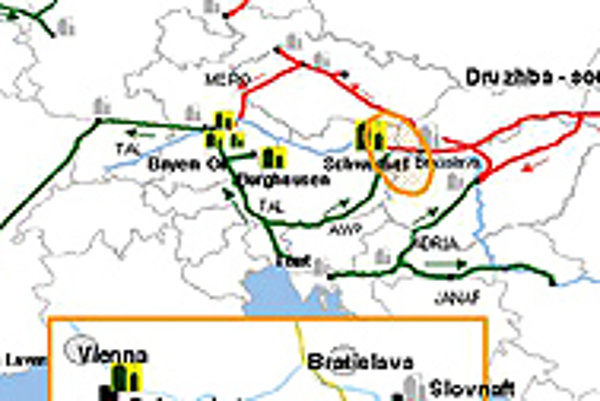 Font size:A-|A+
AN OIL pipeline network will connect Slovakia and Austria by 2006.

The Russian oil producer Yukos and the Austrian company OMV recently signed a memorandum of understanding on transporting crude oil supplies from Siberian oil fields to the biggest Austrian refinery, owned by OMV, in Schwechat, near Vienna.

A new pipeline, which will span from the Slovak refinery Slovnaft in Bratislava to Schwechat, will carry out the oil deliveries.

The new pipeline project looks as if it will benefit all three parties.

OMV, which buys crude oil mainly from the Middle East and the North Sea regions, will thus be able to diversify its oil supplies. The issue of diversifying oil delivery sources has become very appealing to oil processing companies since September 11.

Yukos will extend its portfolio of customers in a more western direction. Yukos raises its oil production every year, but its sale possibilities on international markets are limited because of oil shipment problems from the distant Siberian oil fields.

Last but not least, Slovakia will be able to transport more crude oil through its pipeline system, today used at less than half of its capacity; of course, this will be reflected in increased transfer fees.

"When implemented, this large-scale project will enable our partners to significantly diversify their crude shipments, and it will allow Yukos to increase export to the promising European market," said Mikhail Brudno, an acting member of the Yukos management committee.

Gerhard Roiss, the deputy chairman of OMV's executive board, said: "The cooperation will bring OMV cost advantages on both the product and logistics sides."

Štefan Czücz, general director of Slovak oil transportation company Transpetrol, added: "Our main goal is to fully use the capacity of our pipeline system.

"Constructing and operating the pipeline to Schwechat is an extraordinarily healthy and meaningful project that will enable us to increase the volume of transported oil and to approach the goals that we have set with our strategic partner [Yukos]."

Building the new pipeline connection does not only mean tying up two European refineries; it also unites two different eastern and western pipeline systems that were built during decades past.

The Druzhba pipeline transports Russian crude oil, mainly from Siberia, to Slovakia and the Czech Republic. On its way, it crosses Ukraine and Belarus.

The section of the Druzhba on Slovak territory is operated by Transpetrol, of which Yukos owns a 49 percent share.

The western pipeline system primarily ships crude oil from the Middle East and the North Sea. The oil is delivered to Adriatic and North Sea ports and then, through the pipeline network, supplies Croatia, Austria, Germany, Italy, and the rest of western Europe.

There are only 60 kilometres between the pipeline networks of Bratislava and Schwechat. Thus, connecting these two pipelines was the simplest solution for enabling OMV to use Siberian oil.

The length of the future pipeline will be approximately 60 kilometres, of which 10 kilometres will pass through Slovak territory. The pipeline should be completed by the end of 2005, with crude oil shipments beginning in January 2006.

The crude oil pricing will be comparable to that of crude supply contracts between Yukos and other refineries in the region.

The Schwechat refinery should receive 2 million tonnes of crude oil per year from Yukos via the new pipeline (about 40,000 barrels a day) - 20 percent of the refinery's annual total processing capacity.

The initial period of shipments set by the memorandum is 10 years, with the option of prolonging the deliveries.

Construction costs of the new pipeline are estimated at €28 million; the Slovak sum being approximately €8 million, and the Austrian €20 million.

Transpetrol will finance, construct, and operate the Slovak section of the new pipeline. Transpetrol shareholders - apart from Yukos, the Slovak Economy Ministry owns 51 percent - have already approved the preparatory works of this project.

The Austrian part of the pipeline will be owned by a newly created joint venture between Yukos and OMV, in which they will own 74 percent and 26 percent shares, respectively.

The latest developments in the imprisonment of former Yukos president Mikhail Khodorkovsky, who was accused of tax fraud and subsequently had his shares seized, could potentially risk the pipeline's construction.

However, the involved sides believe that the case of Khodorkovsky, which has received the support of the international business community, will not have a significantly negative impact on the company's projects.

Yukos management recently stated: "The board of directors believes that the recent events around Yukos will not have a material impact on the company's operational and financial activities.

"As the acknowledged leader of the Russian oil and gas sector, Yukos has a strong management system and team. Furthermore, the board of directors commends Mikhail Khodorkovsky for his significant contribution to the achievements of the company."

The Slovak pipeline system has an advantageous position in the European pipeline network. It has a favourable geographic location and a relatively high transportation capacity. It consists of two pipelines.

The Druzhba was built on Slovak territory between 1960 and 1961. Its route begins in the Russian Federation and continues to the Czech Republic through Belarus, Ukraine, and Slovakia.

Druzhba's overall length on Slovak territory reaches 506.6 kilometres, and outside the country, it is 2,280 kilometres. The pipeline is doubled along almost the entire length of the Slovak pipeline. The throughput capacity of the Slovak section is 21 million tonnes per year.

The Adria pipeline only covers 8.5 kilometres of Slovak territory. It starts in the Croatian port Omishajl and leads to Hungary and Slovakia. Its overall length represents 606 kilometres and has an annual capacity of 4.5 million tonnes. It connects to the Druzhba pipeline in Šahy-Tupá, in southern Slovakia.

The Slovak branch of Adria has not operated for a long time. Adria is used only for the transportation of Russian oil to Hungary and Croatia.